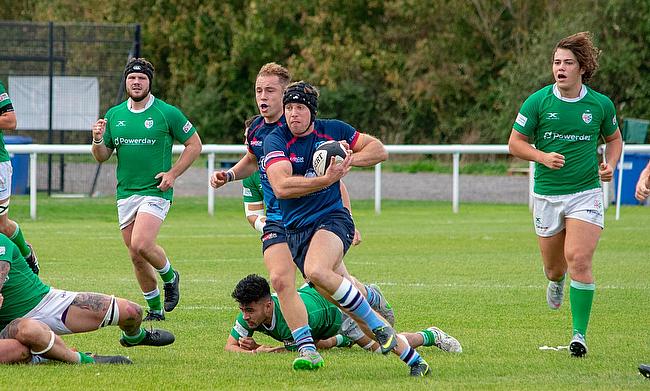 Joe Duffelen insists Rams RFC must not get complacent if they are to keep their promotion challenge on track in National Two South.

Last Saturday’s victory over Redruth saw the Rams extend their winning run to nine matches as the league leaders further cemented their position at the top of the division.

The win in Cornwall leaves Seb Reynolds’ side nine points clear at the summit with three matches to play before the Christmas break. They take on Clifton in Round 14 before facing Birmingham & Solihull and London Irish Wild Geese in their final two fixtures of the year.

Duffelen, who has scored six tries this term, is eager for his side to maintain their concentration as they look to stay in control of the title race.

“So far so good!” Duffelen said.

“We’ve taken every game as it comes. Every week poses a new challenge because there are a lot of good teams in this league and every week we are preparing for something different.

“Every game, there is no complacency. You really have to be at 100 per cent of your performance to come away with a win. We find ourselves at the top of the league, but we know there’s a long way to go.”

Duffelen has certainly played his part in Rams RFC’s recent rise in National Two South. Since their promotion to this level in 2015, the Berkshire club have not finished outside the top seven and now they are mounting a serious challenge for place in National One.

“It’s been nice to build on last year’s third place,” he said. “I don’t think there was an expectation to finish as high as we did.

“I think one of the reasons for our progress comes down to the team itself. The spine of the team has pretty much stayed the same over the past two or three years. That helps when you’re building. It keeps that momentum.”

Duffelen also attributed Rams RFC’s development to the coaches as well as the culture at the club.

“The coaching staff have been fantastic,” added Duffelen, who has been with the club for over a decade. “Things have changed in the past couple of years by introducing S&C coaches, a new defensive coach and we have obviously got Seb who has been fantastic as head coach.

“They’ve created an identity and culture within the club. When you’re in positive working environment, you are more likely to perform. It’s all about expressing ourselves and enjoying our rugby.

“When you have that culture, it just breeds confidence and positivity and we take that on to the pitch.”

BACK PAGE: @Rog0109 backs youngster @eddie_lee112 to fill the striker void at @Binfieldfc, @Rams_RFC make it nine wins on the spin and a big week for #ReadingFC as @modoubarrow14 rescues a point while @andyrinomhota is relishing a trip to Old Trafford. @WokyPaper out now, 70p. pic.twitter.com/NFLYSHzS01

This weekend, Rams RFC face Clifton as they aim to extend their winning run to 10 matches.

Their excellent form has created some breathing space at the top of the division, but Duffelen is keen for his side to keep their feet on the ground.

“Clifton is a completely new challenge again,” Duffelen said. “They have just come off the back of a massive win against Barnes and they also beat Bury and both are great teams so we are massively expecting a challenge from Clifton.

“If we focus on the task in hand, we can come away with another win and keep that momentum. We are aware of the competition below us for promotion and I think that actually makes it more of a challenge because there are so many teams like Canterbury, Henley [Hawks] and Taunton [Titans] that are still fighting for the top spots.

“There is no real room to slip up so I think that gives us even more drive to make sure we are concentrating on our game.”

In terms of the title race, the Rams are very much in the driving seat and Duffelen also admitted that promotion is a realistic goal, but was quick to point out that his side are not looking too far ahead.

He added: “We have got a chance. There are number of teams that have a chance [of promotion].

“We really have to stay focused. Would we like to get promoted? The answer would be yes and I suspect that would be the same for quite a few teams.

“It is cliché, but it really is each game at a time so as long as we keep doing that, hopefully we can get into a position where we give ourselves a good chance, but there is a long way to go just yet!”