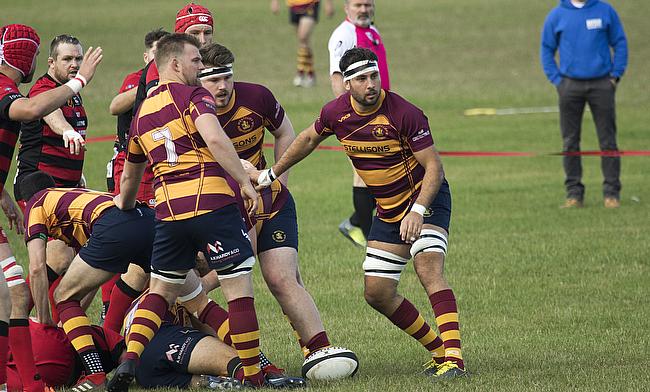 Joe Vandermolen says Westcliff have slowly adapted and developed to National Two South rugby as the second half of the season is set to begin. (Photo Credit: Tim Browne)

The lock has been a mainstay during Westcliff’s recent upturn in results and 11 points from their last five games has seen Peter Mahoney and Jacob Ford’s men move out of the bottom three.

Vandermolen believes his side are beginning to find ‘the right balance’ following impressive wins over Esher and Redruth, as well as a victory on the road against Worthing Raiders.

Westcliff achieved promotion to the fourth tier for the first time in their history back in April, but the Southend-on-Sea outfit have stuck with their ethos and currently, their methods seem to be working.

Well what can you say – all 3 Westcliff teams won on this day of days .
You just have to sit back and say life just doesn’t get any better than days like today !
Big thanks to @esherrugby who were fantastic opposition . #oneclubonefamily

“I think considering where we are and we kept our DNA of amateur rugby going into tier four, we obviously knew it was going to be a step up,” he told ncarugby.com

“We waited for the league to develop to see who we can try and beat to essentially pick up as many points as we can. As you can see from results, home games have been close.

“I remember starting against Dings [Crusaders] and we lost in the last play of the game, but going on from that, beating Redruth, beating Esher and beating Worthing away shows that we have managed to find a real balance.

“I think it was always going to take time like it always does. You adapt to the league which is something that doesn’t happen overnight or over one pre-season. It was a real shame we couldn’t back it up last week against Barnes [lost 34-27] because that would have been the first time we have won consecutively, but I think it will come and when it does finally click, we will be in a strong position.”

Despite sticking to the club’s principles, Westcliff did have a new change in direction when it came to appointing their coaching set-up for this season.

Alongside Director of Rugby Peter Mahoney, Jacob Ford (brother of England international George) took over the head coach role. Saracens’ Jackson Wray is also part of the backroom staff at the Gables whilst Vandermolen himself is balancing his playing duties with being the forwards coach at the club.

“I am one of the players at Westcliff that has experienced this tier before so naturally, I said I was happy to step up and help the players,” he said. “With Jackson’s help, it has been massive. Fordy has also come into the head coach role and he has absolutely smashed it in terms of what we needed.

“That head coach role is quite difficult when you are not paying your players to train and he has done everything possible to enable an amateur club to do well in a semi-professional environment.

"Jacob is a very impressive young man with obvious pedigree…"#Nat2s new boys @westcliffrugby have appointed Jacob Ford as their new Head Coach ahead of the 2019/20 campaign.https://t.co/B9Rvg1Bkxb

“I think there are still two or three players who literally do not train. They are local boys, but they live in London so they cannot get to training but they can turn up knowing what we have done in training because pretty much all of it is filmed.

“Fordy does points on training and where we are looking to improve. Potentially, you could not play and just watch our training from Hudl and turn up on a Saturday and realise what we are doing and it has worked.

As Vandermolen previously alluded to, he is one of the more experienced heads in the Westcliff dressing room. The second-row moved back to the Gables three years ago after a spell with Bedford Blues, where he won Players Player of the Year in 2014, before enduring a stint at Chinnor.

He revealed he has been able to use his knowledge to help his current club this season, but Vandermolen also admitted he knew the path he wanted his rugby career to go down following his time at the higher levels of the game.

He added: “Obviously, I was at Bedford for three years. I never thought I would be there. When I came out of Bedford, Chinnor offered me a big deal, not just to play rugby, but more so because I wanted to extend a career outside of the sport. It took me probably about a year to realise that actually, it is very mercenary. These National Leagues teams are happy to pay some considerable money for players to come, but why I play rugby, I found out, wasn’t because of this.

“Bedford, although it was a professional club, they kept alot of amateur attributes which naturally I liked. Chinnor wasn’t exactly the same. I wasn’t bothered about being paid to play rugby. I was just happy to just play rugby.

“I think when you’re in this league,  experience does a lot more than you expect it to. When you have got a squad that is entering into tier four rugby that have never played at that level, they do look at you. I think in changing rooms before the games and at half-time, simple words do go a long way.”

Vandermolen will now be keen for Westcliff to conclude a memorable 2019 with a victory on Saturday afternoon when they host Bury St Edmunds.

Westcliff bag win on big day for the club@westcliffrugby https://t.co/yu1QuOBe1s

Having also recently relocated to a new clubhouse, the Lions christened the unveiling with a triumph over Esher at the start of the month and they will now be gunning for a third straight home victory when they entertain ninth-placed Bury.

Westcliff, themselves, are currently two points clear of the drop zone, but Vandermolen insists he is not bothered by the league standings at this stage of the campaign.

“We always said we were going to target our home games whether that be against top or bottom of the league,” he said.

“I’ll be honest with you, I have stopped looking at the league table and where we are so if we win this, I don’t know what is going to happen! What I do know is we want to win every single game and pick up every single point.

“We can’t get too caught up about where we are in the league at the moment. We can’t put pressure on ourselves and say we must win. The aim of the game is to just enjoy it and then rest up over Christmas.”