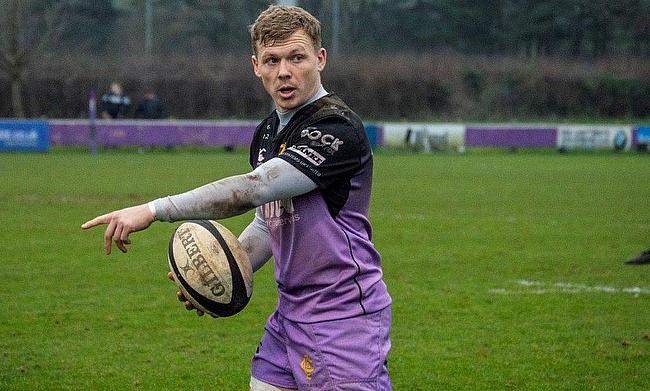 Mitch Spencer says Clifton are capable of toppling another National Two South title contender on Saturday, but admits the Bristol outfit must be ‘on the money’ when they face Tonbridge Juddians. Photo Credit: (Alan Stoles)

Last weekend, the Lavender and Blacks secured their fifth win from their last six matches as they defeated promotion candidates Henley Hawks in Round 24.

Tries from Bentley Halpin, Luke Stratford and Chris Levesley helped Clifton complete the double over the Hawks and the Bristol outfit are no strangers to defying the odds.

Matt Salter’s side also beat current league leaders Tonbridge Juddians 23-22 back in November and Spencer sees no reason why Clifton can’t replicate that outcome once again if they execute their game plan to perfection.

“If you don’t turn up against these top sides, it is going to be a pretty rough afternoon!” he said.

“We have seen that TJs are beatable and they are not invincible, but if you give them an inch, they will take it. When we beat them earlier on in the year, defensively, we were immense. It is probably the best we have defended all year and we will have to do something similar on Saturday.

“If you give TJs the ball, they keep hold of it for long periods and they are massively physical. Miss a tackle and suddenly it is ‘bang, bang’ and they are under the sticks. It is going to be a tough test again and we have to be on the money, but ultimately, I do think the pressure is on them. They are top of the league and if they slip up, that knocks their hopes so it is up to us to go there and play our own game and see what we can do!”

Whilst a strong defence played a crucial part in Clifton’s win over TJs earlier in the season, it was also the cornerstone of their victory against Henley last weekend.

With the fixture relocated to Dings Crusaders’ Shaftesbury Park due to the horrendous weather conditions, Clifton managed the game, and the elements, superbly to claim another win.

“We knew what Henley were going to bring,” Spencer said. “They are big and physical and like to chuck it around and ultimately, it was down to our defensive focus.

“We knew if we could kind of play without the ball and not play any rugby in our own half to make them play, we just had to be relentless in defence and we were. That was what won us the game because we were tough to break down.

“In the first 20, we were decent. We looked good and retained the ball well but that changed before half-time because we started to give away stupid penalties and that allowed them to kick to the corner which highlighted the dominance of their forward pack. We struggled, went into half-time to regroup and in the end, we played the territory well and coped with the ridiculous weather conditions that little bit better.”

Spencer was one of Clifton’s standout performers last time out along with Gloucester academy product and England U20 international Jack Clement.

The Lavender and Blacks are continuing to build a positive relationship with the Gallagher Premiership club and Spencer says the connection between the two teams is another positive sign for Clifton.

He added: “It is awesome. We have built a good link with the Gloucester academy over the past couple of years and to be fair, the players who have come down have really brought into it. We obviously have Jack, Archie [Benson], Tom Stanton etc and all of them are great assets.

“With our recruitment at the start of the year, there were a couple of areas where we were a little bit light so having that back up and resources which Gloucester are willing to give us is really good. It is helping their development as well as helping ours.”

Spencer is now in his sixth season at Station Road and during that period, Clifton have had to fend off the threat of relegation on a couple of occasions.

However, in the last two campaigns, Matt Salter and his coaching staff have guided the Bristol club towards the right end of the table and as things stand, Clifton sit just 10 points behind second-placed Taunton Titans as we enter the final furlongs of this term.

A top two finish is not unfeasible for Clifton and whilst Spencer says the club are just taking every game as it comes, he admits his side will have confidence behind them when they visit table toppers Tonbridge Juddians on Saturday following their excellent recent form.

“Confidence is massive,” Spencer added. “We do take things on a week by week scenario, but you can’t look past that win over Henley. It does give us confidence.

“We know TJs will be firing after the win we had over them earlier on in the year and also because of the position they are in.

“For us, with six to go, we have four away games which are never easy so it is going to be a good last push and it will be interesting because those top five positions are still anyone’s guess.”