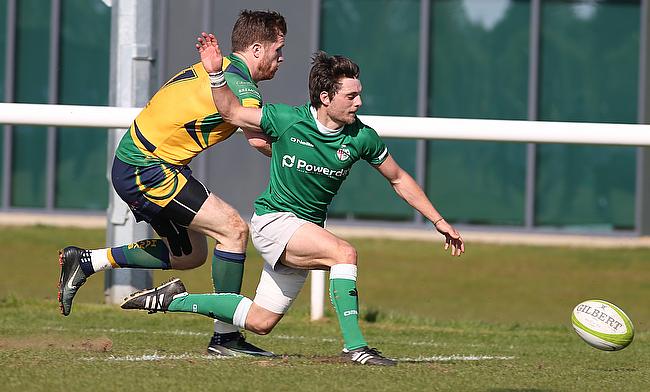 Lee Starling’s men are now seven points from safety while their fellow rivals, Barnes and Birmingham & Solihull, also picked up excellent wins in Round Eight.

Barnes defeated Old Redcliffians on their own patch while the Bees came away from Guernsey with the spoils as both sides continue to fend off the threat relegation.

At the top of National Two South, Rams RFC battled to a victory over Tonbridge Juddians and Taunton Titans are back in the top two following an away win against Old Albanian.

Elsewhere, Henley Hawks are up to third after beating Worthing Raiders while there were also impressive victories for Canterbury and Dings Crusaders.

Rams RFC were once again clinical as they claimed their fourth consecutive victory to remain clear at the summit of National Two South.

The Rams continue to set the pace in this division and they led at half-time in this contest thanks to scores from Ben Henderson (2) and James Page as well as a penalty try.

What an excellent game of rugby at Old Bath Road between Rams and Tonbridge. Excellent performances throughout the game.????Have a safe journey home Tonbridge and good luck for your next game???? pic.twitter.com/bSSOs4VBgV

Jak Rossiter’s effort 12 minutes from time sealed the win for Seb Reynolds’s men who stay four points ahead of the chasing pack.

Tonbridge Juddians scored through Hugo Watson and Robert White while Will Robinson kicked eight points for the visitors.

Taunton Titans climbed back into the top two of National Two South following a bonus-point win at Old Albanian.

Jarrard Hayler gave Taunton an early lead and further tries from Alfie Petch and Lewis Webb put the Titans 23-0 up after 34 minutes.

Scores from Dan Watt and Peter Warne, either side of the break, saw OAs threaten a comeback, but a penalty try plus Connor Baker’s effort ultimately secured a solid away win for Taunton.

Tobias Munday did cross for OAs in the final 15 minutes, but it was merely a consolation.

Henley Hawks moved up to third place in National Two South after an excellent win over Worthing Raiders at Dry Leas.

Alex Bradley went over twice for the home side with Leo Webb and Xavier Andre also touching down.

The Hawks were also awarded a penalty try while Worthing, who led this contest 8-5 at half-time, scored through Matt McLean and Jon Dawe.

London Irish Wild Geese came from behind to clinch their first victory of the season and stun Redruth at Hazelwood.

Redruth raced into a 14-0 lead following a brace from Dean Bonds and further scores from Ben Fox and Thomas Notman restored their 14-point advantage after 45 minutes.

Oliver Turner and George Owen had crossed for the Wild Geese, but the final half an hour of this contest belonged to the hosts.

Owen grabbed his second before Scott Moore and Brandon Baker both touched down to seal a welcome victory for Lee Starling’s side.

Canterbury produced an impressive fightback to beat Clifton and maintain their 100 per cent home record this term.

Clifton seemed to be in control of this encounter as they led by 12 points towards the end of a frantic first period, but the City Men battled back strongly.

Will Pomphrey (2), Bentley Halpin and Chris Rovery all crossed to give the visitors a 26-14 lead after 33 minutes, while JJ Murray and Aiden Moss went over for Canterbury.

The home side then scored three tries in five minutes either side of the break as James Stephens, Royce Cadman and Murray touched down to give the Kent outfit an 11-point advantage.

Back came Clifton as Pomphrey completed his hat-trick to reduce the arrears to four points, but Moss’ second score of the afternoon on 78 minutes clinched the victory for Andy Pratt’s side.

All of the tries in this contest came in the first 30 minutes as Mark Kohler opened the scoring for the home side before Dings struck back.

Trinham and Knight gave the Crusaders 14-7 lead at the break with the only points of the second period coming from the boot of Ben Bolster as the Bristol-based side continued their impressive return to National Two South.

Barnes secured their second win on the spin as they clinched a hard-fought victory over Old Redcliffians.

Jack O’Malley gave the visitors the lead after just three minutes, but his early score was cancelled out by tries from Jack Garrett and Daniel Ruddock.

Barnes failed to extend their 10-7 advantage until the 77th minute as Matthew Cornish crossed to seal the win for the home side, which now leaves them six points clear of the relegation places.

Birmingham and Solihull produced a late comeback against Guernsey to seal their second victory of the campaign.

The Bees did shade the opening half and had a 12-7 lead thanks to Matt Dight and Ashley Scriven only after Layton Bastian had begun the scoring for Guernsey.

But, the hosts responded after the break with tries from Dominic Rice and Nicholas Merrien, either side of a Jack Jolly penalty.

However, it was the aforementioned Jolly who kickstarted Birmingham and Solihull’s comeback as he landed two more kicks in the final 10 minutes before converting Corey Venus’ decisive score which sealed a potentially crucial win for the Midlands club.