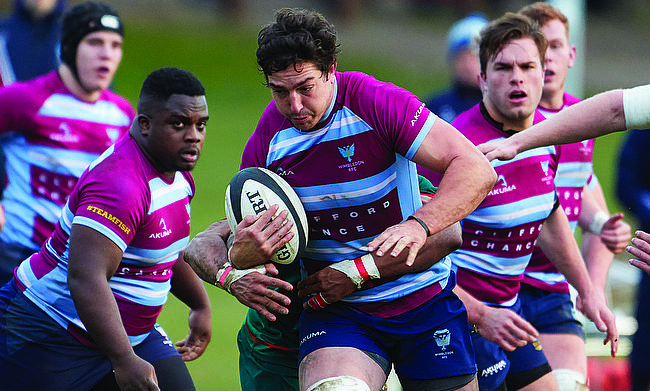 Barnstaple and Wimbledon will meet at Pottington Road on Saturday as both sides aim to avoid relegation to the fifth tier of English rugby.

Not only are Barum and the Dons fighting for their survival, Old Redcliffians and London Irish Wild Geese are also battling to stay in this division for another season.

Steve Perry’s Barnstaple are currently two points from safety while Wimbledon are also in the drop zone. Barnstaple require three points or more to stay in this division while the Dons must pick up a victory in Devon to stand any chance of staying up.

However, their fate could be dependent on Old Redcliffians’ result against Redruth because if Kevin Coster’s side secure two or more points at Scotland Lane, then they will be safe. As for London Irish Wild Geese, it is much more straightforward. A point from their home fixture against Worthing Raiders will confirm their place in National Two South for next season.

They did it the hard way, but Cinderford clinched the National Two South title and automatic promotion to National One last weekend. Paul Morris’ side battled back from a half-time deficit to defeat Bury St Edmunds in Suffolk which confirmed the Foresters’ return to the third tier of English rugby. In doing so, Cinderford also recorded their 23rd win in a row.

The party will be in full swing at Dockham Road this Saturday and the drinks may have been on the house for Canterbury if Cinderford had not beaten Bury last week. The City Men clinched a superb 52-29 win over second placed Chinnor so that result would have handed the title to Cinderford regardless of what they did at the GK IPA Haberden. As it was, Cinderford got their job done and Canterbury secured arguably their result of the season and they may even be able to sneak into the top half of the table if they pull off another excellent victory in Round 30.

Chinnor Director of Rugby Matt Williams told the club’s website that their loss to Canterbury in Round 29 will “act as a wake-up call” as the Oxfordshire side prepare for their National Two play-off game. It was a below par performance from the Black and Whites in Kent and with a potential clash with either Sale FC or Sedgley Park from National Two North to come, Chinnor will want to head into that contest on the front foot.

Throughout this season, we have seen the quality Williams’ side possess and they will be hoping to show their class when they host Clifton on Saturday. The Gloucestershire outfit were beaten by third placed Redingensians last week, but five straight wins prior to that loss was enough for them to secure their place in this division for another year. Credit must be given to Darren Lloyd’s side for an amazing revival and they will now be able to enjoy their trip to Kingsey Road.

Last week, Redingesians secured the bronze medal position in National Two South following their hard-fought win over Clifton at Station Road. The job Seb Reynolds and the staff at Redingensians have done over the last few years has been excellent. The Rams have continued to progress and to finish in the top three this term is a wonderful achievement for the Berkshire club.

The Old Bath Road faithful will be in high spirts when they entertain Henley Hawks this weekend while the Hawks are desperate to end this term on a positive note. All in all, it has been a step in the right direction for Pete Davies’ side as they continue building towards National One, but just one win from their last nine games has taken the gloss off their season. At one point, Henley were challenging for a top five place, but now they can only finish as high as seventh and to have a chance of achieving that, they must clinch a victory over Redingensians this weekend.

It has been another strong season, but another season of inconsistency for Taunton Titians. After a blistering start to the campaign, a poor run of results between November and December saw Tony Yapp’s side fall away from the promotion race and blips in form have plagued the Somerset outfit for the last few years.

It something which they will be keen to put right because they are a side capable of finishing in the top two and something else they will be eager to amend is their recent run of form. Taunton travel to already relegated Broadstreet on Saturday having lost all three of their matches in April while the hosts will be aiming to end a very tough campaign with a win in front of their own supporters. Street had their fate sealed at the start of the month, but Cliffie Hodgson and his staff are already putting plans in place for next season as Street look to recover from a difficult spell back in National Two.

“Everyone was gutted.” That was how Old Redcliffians Director of Rugby Kevin Coster described the feeling after their defeat to Wimbledon last weekend. Old Reds had the chance to confirm their safety in this division after a wonderful turnaround in their fortunes, but they failed to take the opportunity and it means their fate is still in the balance heading into the final day.

As things stand, the Bristol outfit are two points clear of danger and two points or more from their home fixture with Redurth will keep them in National Two South. However, if Redruth gain a victory at Scotland Lane then results elsewhere come into play for Old Reds. In terms of the visitors, they travel north this weekend having already secured fifth place which represents a solid season for Pale Nonu’s side. Their home form has played a major part in their success so just a fourth away triumph of the campaign would be a positive way to complete the campaign for the Cornwall-based side.

Tonbridge Juddians were promoted alongside the aforementioned Old Redcliffians 12 months ago and while Old Reds battle for safety, TJs have secured sixth place. It has been an amazing campaign for Peter Dankert’s side and their wonderful season was summed up by their 66-26 win over Taunton Titans last weekend.

TJs began life at this level with a 50-17 win away at Bury St Edmunds so the visitors to the Slade will be hoping for some revenge this Saturday. It has been a mixed season for Bury with changes to staff also going on in the background, but the Wolfpack must be pleased to be sitting in seventh heading into the final weekend of the term. Since Jon Curry’s appointment, Bury have continued to progress and narrow defeats against Cinderford and Chinnor emphasis that. The Suffolk side will travel to Kent aiming for a victory and a win will see them finish four places higher than last term.

London Irish Wild Geese secured a vital victory over Henley Hawks in Round 29 to leave them on the verge of safety in National Two South. Their 36-19 victory was described by head coach Lee Starling as “massive” because the Sunbury-on-Thames side require just one point from their fixture with Worthing Raiders this weekend to guarantee their place at this level for next season.

As for Worthing, they travel to Hazlewood aiming to confirm their position in the top half of the table. Jody Levett’s men were fighting to avoid the drop 12 months ago so to finish in the top eight is certainly a big tick in the box in terms of the Raiders’ progression. They come into this clash having won their last two games and if they were to deny Wild Geese any points, then results elsewhere will come into the hosts’ thinking.

The game of the round? Yes. The game of the season?  Very possibly. Barnstaple against Wimbledon is arguably the fixture of the weekend across all three National Leagues due to the fact it has so much riding on it. Both sides currently sit in the drop zone and it is possible that both teams could be relegated on Saturday afternoon, regardless of what the outcome is at Pottington Road.

One more training session. One final push. One more roll of the dice. One last draw.

However, both clubs are going for survival. In terms of Barnstaple, a run of one win from their last eight games has seen them tumble into the bottom three and they require three points or more to stay in this division, but that relies on Redruth doing Barum a favour against Old Redcliffians.

As for Wimbledon, they must win in Devon to stand any chance of survival and hope other results go in their favour. Considering the Dons won just one of their first 16 games, it is remarkable they could still be a National Two South side come Saturday night. The men from Barham Road deserve a lot of credit for their revival and if they were to pull off an escape, it would be one of the stories of the campaign.