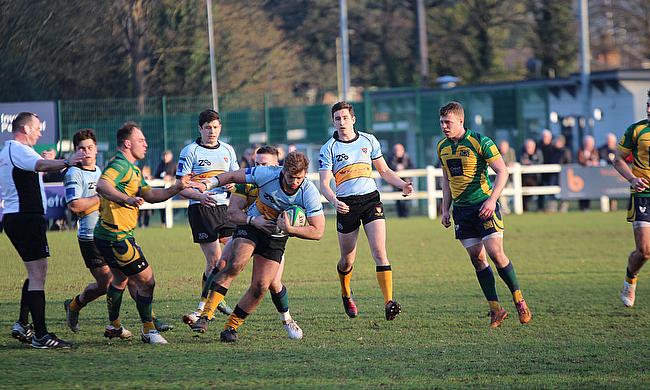 Henley Hawks and Canterbury have dazzled in recent weeks and both of the promotion candidates clash at Dry Leas on Saturday in National Two South.

The Hawks currently sit in second place following a run of seven consecutive victories while Canterbury are just two points behind Henley after four wins on the spin.

Along with this top of the table clash, there are some other really intriguing match-ups in Round 12. We have an all-Bristol affair as Dings Crusaders visit Old Redcliffians while Bury St Edmunds, under new head coach Nick Wakely, host Clifton and Guernsey take on London Irish Wild Geese in a significant fixture at the foot of the division.

Elsewhere across National Two South this weekend, league leaders Rams RFC will be gunning for an eighth straight win when they entertain Worthing Raiders while high flyers Taunton Titans and Tonbridge Juddians meet at the Slade.

Last week, I think it is fair to say that Rams RFC were staring at their first defeat since September. 24-7 down against Taunton Titans, the National Two South leaders showed character and calmness to fight back and claim a seventh straight victory to keep them in control of the title race. Yes, they were aided by a red-card to Taunton, but Seb Reynolds’ side showed their quality in Somerset last week and they can stay in the box seat for promotion when they host Worthing Raiders in Round 12.

The Rams have not lost at home since January so Worthing have a tough task ahead of them this weekend. The Raiders arrive in Berkshire with a growing injury list and that has affected their recent results as Jody Levett’s men have won just one of their last four matches. The ninth-placed side will be aware they are the underdogs for this weekend so can the Raiders upset the odds at Old Bath Road?

This is arguably the game of the weekend in National Two South as second placed Henley Hawks host fellow promotion candidates Canterbury at Dry Leas. The Hawks currently occupy a spot in the top two and that is down to the phenomenal run they are on. Nigel Dudding’s side have won their last seven games, but they are only two points ahead of their nearest challengers who they face this Saturday.

And back-row @tomhall6 believes their seven-game winning run is down to "professionalism" as the promotion candidates look to make a statement against Canterbury this weekend. #Nat2shttps://t.co/tJIra7U7Nw

Canterbury arrive in Henley in third place and while the hosts will be oozing confidence, the City Men will also be in a buoyant mood. Andy Pratt’s side have won their last four games to really strengthen their promotion bid and a fifth victory in a row would not only enhance their ambitions, but it would also take Canterbury into the top two heading into December.

Whilst second face third this weekend, fifth also plays fourth in National Two South as Tonbridge Juddians entertain Taunton Titans at the Slade. The Titans would have been hugely frustrated after the conclusion of Round 11 as it looked as though they were going to topple the league leaders. However, a red-card and a fightback from Rams RFC saw Taunton fall to consecutive defeats which now leaves them four points off second placed Henley.

In recent seasons, Tony Yapp’s side have found consistency hard to come by at this time of the year so a victory over Tonbridge Juddians would be the perfect way to enter the festive fixtures, however, the hosts will have other ideas. Three straight wins for Peter Dankert’s side leaves them just seven points behind the top two and a promotion push is certainly not out of the question for the Kent-based side. With rivals Henley facing Canterbury as well, a fourth victory on the trot would keep TJs in a very strong position.

The last month could be seen as a real turning point in Old Albanian’s season. Following relegation from National One in April, Gavin Hogg’s men made a stuttering start on their return to this level, but three straight victories as breathed new life into their campaign. OA’s currently sit sixth in the table and they are nine points behind the top two so there is still a lot of work to be done, but things are on the up for the men from Woollams.

Next for OAs is a home fixture against Birmingham and Solihull and the visitors arrive in Hertfordshire in contrasting position to their hostrs. The Bees occupy a place in the relegation zone as things stand, but they are only six points off safety despite suffering a deduction of five points at start of the season. Pete Glackin’s side have actually performed very well in recent weeks, especially on the road, and they come into this fixture having won their last two away matches. Victories against rivals Guernsey and London Irish Wild Geese were significant for the Midlands club and a third straight win on their travels would certainly enhance their chances of beating the drop.

Redruth were able to halt a run of three consecutive defeats in Round 11 as they battled back to earn a 20-20 draw against Bury St Edmunds at the Recreation Ground. Forwards coach Gareth Tedstone told the club website that the Reds were frustrated after they were unable to “make the game safe” in the second-half and he also stated that this week’s fixture with Barnes will be the biggest challenge Redruth have faced so far this season.

The Cornwall-based side are without a win in four games while Barnes most certainly have a spring in their step. After gaining promotion into National Two South, the London outfit have been superb over the last few weeks. Other than the top two sides in the division, Barnes are in the best form having won their last five fixtures and considering they had lost five on the spin prior to this run, it has been a brilliant turnaround by the club. Barnes will now be searching for a sixth victory in a row and they can leapfrog Redruth in the table should they achieve that feat.

Having witnessed back to back Bristol derbies at the beginning of the season, we conclude November with the latest local rivalry as Dings Crusaders take the 10-mile journey to Scotland Lane to face Old Redcliffians. Dings come into this clash aiming to recapture some of their early season form as Luke Arscott’s side have lost their last three matches.

Defeats against Barnes, Rams RFC and Tonbridge Juddians (three of the form sides in the league) is certainly not worrying for the Crusaders, but they will be keen to end a tough month with a victory under their belt. However, it won’t be straightforward for Dings as Old Reds come into this fixture in high spirits. A superb individual performance from Henry Bird helped Saul Nelson’s side thrash Guernsey 51-17 in Round 11 and now Old Reds are out of the bottom three. They currently sit two points clear of the drop and a second win on the spin against their near neighbours would be another welcome boost.

It has been a big week for Bury St Edmunds as the club announced Nick Wakely as their new head coach. The ex-Wales Women’s coach has replaced Jon Curry at the GK IPA Haberden and will be with the club until the end of this season as he looks to improve the fortunes of the Wolfpack.

Bury have recorded just one win from their last seven games so Wakely will be hoping for an instant impact when they host Clifton in Round 12. The visitors currently sit a place and three points behind Bury heading into this encounter and like their hosts, the Lavender and Blacks are struggling for form. Clifton have lost four straight games since their last win over Birmingham and Solihull just over a month ago so they will be craving a victory from their trip to Suffolk this weekend.

Two sides who currently occupy positions in the relegation zone meet in Round 12 as Guernsey welcome London Irish Wild Geese to the Channel Islands. Last weekend, the hosts slipped into the bottom three after a significant loss away at Old Redcliffians, but Jordan Reynolds’ side have the perfect chance to respond at Footes Lane in Round 12.

No parking at Grammar Sch this week, but there will be at Memorial Field.@GLRugby vs @WindsorDames. Sunday. KO 1pm pic.twitter.com/2ZtXmxELfK

The Raiders are just two points from safety while London Irish Wild Geese head into this Saturday seven points away from climbing out of trouble. Since back to back wins over Redruth and Clifton, Lee Starling’s side have fallen to successive defeats against Birmingham and Solihull and Canterbury so they will be desperate to relight their campaign by gaining a victory over one of their relegation rivals.