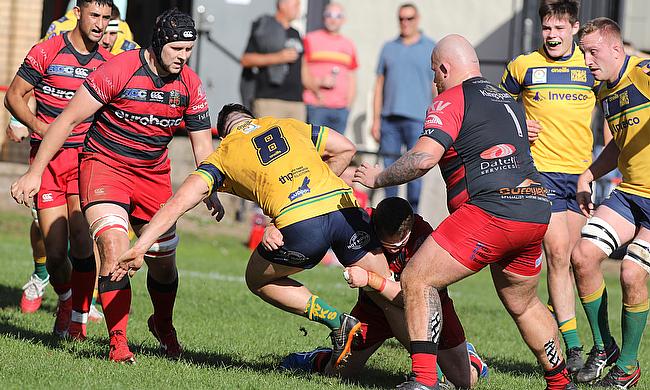 Rams RFC’s seven-point cushion at the top of National Two South is still intact as they dug deep to secure a victory over fellow promotion candidates Taunton Titans.

The Rams found themselves 17 points down at one stage in Somerset, but a red-card for Taunton gave the league leaders a route back into the contest and the Berkshire outfit came up with the goods.

Seb Reynolds’ men still have Henley Hawks hunting them down after they saw off Birmingham and Solihull while Canterbury are up to third following a victory against London Irish Wild Geese.

The Wild Geese remain at the foot of the division after that aforementioned loss, but Old Redcliffians no longer join them in the relegation zone after they thrashed rivals Guernsey at Scotland Lane.

Elsewhere across National Two South, there were wins for Tonbridge Juddians, Old Albanian and Barnes while Redruth rescued a late draw against Bury St Edmunds.

Rams RFC produced an excellent comeback against the 14-men of Taunton Titans to seal their seventh victory in a row.

The Titans had led 24-7 thanks to tries from Oscar Kolowski, Ollie Rice (2) and Nick Mason, but a red-card shown to Barrie-John Chapman at the start of the second half proved to be the turning point in this contest.

Before his dismissal, the Rams had scored a penalty try while Ben Henderson had also touched down, but with the man advantage, the league leaders had the upper hand.

The visitors grabbed a third score via Jamie Guttridge, however, Taunton were able to extend their lead to six points as Gary Kingdom landed a penalty,

But, the Rams took the lead when they were awarded their second penalty try of the afternoon before Sean McDonnell-Roberts sealed the win for the away side.

Kingdom did slot a penalty to secure two bonus-points for Taunton, but they will feel this was a missed opportunity against the table toppers.

Henley Hawks’ winning run in National Two South was extended to seven matches as they clinched a hard-fought victory over Birmingham and Solihull in the Midlands.

Two first-half tries gave the Hawks a 14-3 lead at the break after the hosts had gone in front via a Jack Jolly penalty.

Both sides exchanged scores after half-time as Henley’s third effort was cancelled out by Umraan Jadwatt, but Mike Hagan’s try brought the Bees to within four points of their visitors.

However, a bonus-point score for Henley was ultimately enough to secure the win for the visitors even though they had David Manning sent-off late on.

Canterbury are up to third in National Two South following a comfortably victory over London Irish Wild Geese in Kent.

The City Men have now won four games on the spin and they sit just two points behind second placed Henley Hawks.

Andy Pratt’s side dominated the first-half as Ricky Mackintosh, JJ Murray and Aiden Moss all scored in the opening 40 minutes.

The hosts continued to control proceedings after the break with Samuel Kenny and Tristan King both crossing to seal the victory.

London Irish Wild Geese, who are now seven points from safety, eventually got on the board in the final 10 minutes as Oliver Turner and Sean Cunningham both touched down.

Tonbridge Juddians secured their third win on the bounce as they saw off a valiant Dings Crusaders side in an eight-try thriller.

An entertaining first half ended with TJs 17-15 up following tries from Murray Galbraith-Lowe and Will Colderick, with Ben Bolster and Stean Williams responding for Dings.

Will Robinson’s penalty extended the visitors’ lead after the break, but Matt Smith’s try made the game level on 44 minutes.

But, Colderick was able to complete his hat-trick which helped TJs seal the win, while Josh Trinham’s late try earned Dings two bonus-points.

Old Albanian extended their winning run to three matches as they clinched a victory over Clifton at Station Road.

Chris Levesley’s try gave Clifton the lead in the first-half, but Tobias Munday and Alessandro Ricci both crossed as OAs led at the break.

Levesley’s second score straight after half-time put the hosts back in front, but tries from Charles Watson and Aaron White Martinez put the away side 24-14 up.

Lloyd Anderson’s effort either side of tries from Clifton’s Sam Goatley and Daniel Hill rubber-stamped the win for OAs while the home side claimed two bonus-points.

The hosts led 13-8 at half-time as two penalties from Aaron Simmonds as well as Richard Brown’s try cancelled out Cameron Richie’s effort and three points from the boot of Nicholas Perez.

After the break, Will Scholes crossed to bring the visitors level before Finlay Sharp raced over to put Bury 20-13 in front.

However, the away side were denied their first win in just over a month as Richard Kevern scored and converted his own try right at the death.

Barnes made it five wins on the spin in National Two South thanks to a battling victory over Worthing Raiders.

Barnes’ Matt Cornish and Robbie Martey made it 26-16 at half-time, with McLean grabbing his second before the interval for the home side.

Jack Lee reduced Barnes’ lead to two point with Worthing’s fourth try, but the visitors replied through Daniel Holmes and Martey as well as the boot of Tom O’Toole.

Those 13 unanswered points ultimately secured the win for Barnes with Forrest’s second try of the afternoon proving only to be a consolation for the Raiders.

Old Redcliffians have moved out of the relegation places in National Two South following a resounding bonus-point victory against Guernsey in which winger Henry Bird scored five tries.

The game was actually level at 17-17 at the break, with Sam Stevenson and Thomas Ceillam responding to Old Redcliffians tries from Bird (2) and Ed Boxall.

But Kieran Ward, Bird (3) and Dan Fry all crossed as Old Reds smashed their way to their first home victory of the campaign.

Old Reds are now two points clear of danger while Guernsey fell into the bottom three following this defeat to their rivals.