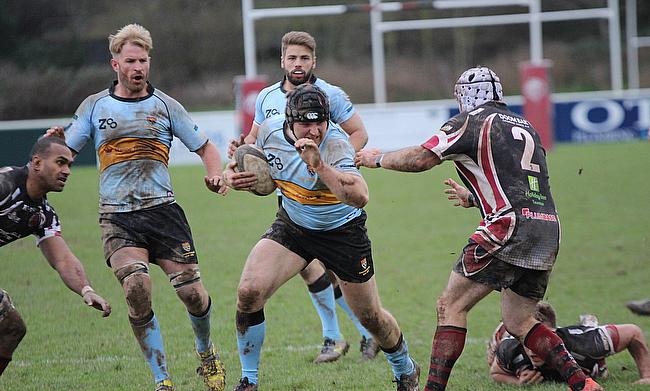 League leaders Taunton Titans will be aiming to maintain their 100 per cent start to the season when they host Canterbury this weekend.

Tony Yapp’s side have been imperious so far this term, but the visit of the City Men will be a stern test of the Titans’ credentials. Canterbury head to Somerset having not lost since the opening day of the season and they are certainly a side that can cause the table toppers problems in Round Eight.

Keeping close tabs on the fixture at Hyde Park will be second placed Chinnor. After seeing off a stubborn Tonbridge Juddians last weekend, Matt Williams’ men are once again up against a newly promoted side this Saturday, as they take the trip to Broadstreet while third place Cinderford go to the aforementioned TJs.

Two teams bang in form meet at Hyde Park this weekend as league leaders Taunton Titans host fourth place Canterbury. The Titans have won all seven of their matches so far this term, but they had to come from behind against Bury St Edmunds last weekend to ensure their 100 per cent record remained intact. Other than that, Tony Yapp’s side have been commanding, but the visit of Canterbury poses their toughest test of the season so far.

The City Men arrive in Somerset on the back of six straight wins with confidence flowing through their veins. Andy Pratt’s side have been the surprise story of the season so far and they fully deserve to be sitting fourth in the table as things stand. Canterbury have been plagued by inconsistency over the last couple of years, but they may well have overcome their patchy results and victory this weekend would certainly emphasis that point even further.

Second placed Chinnor travel to newly promoted Broadstreet this weekend aiming for a much more straight forward afternoon than last Saturday against another one of the newcomers. Tonbridge Juddians made life hard for Matt Williams’ side at Kingsey Road in Round Six, but the Black and Whites did prevail to seal their sixth straight win. Now, they head north this weekend looking to close the gap between themselves and Taunton.

Broadstreet welcome Chinnor to the Ivor Preece Fields aiming to make it two home victories on the spin. After triumphing against London Irish Wild Geese, Street fell to a defeat against Redingensians last weekend, but back on home soil, Paul Hurst’s side seem to be much more comfortable. This is their first ever season in this division and Broadstreet’s record in the Midlands could be key to their survival and victory over a side that has lost just four of their last 37 National Two South matches would be a huge bonus.

There were tight affairs involving the top three in National Two South last weekend and Cinderford completed the line-up following a narrow win against Worthing Raiders. Paul Morris’ side left it late, but it was the response the Gloucestershire men needed after suffering their first defeat of the season against Chinnor in Round Five. Now, Cinderford will refocus on manoeuvring themselves into the top two and victory away at Tonbridge Judddians could see them accommodate a promotion place come Saturday evening.

However, Cinderford will have to be wary of their hosts. Last weekend’s performance against Chinnor is the reason for that because Tonbridge Juddians so nearly toppled a side that hasn’t tasted defeat at home in 21 months. The TJs needed that kind of performance following defeats against London Irish Wild Geese and Redingensians so they will return to the Slade knowing that they have the qualities to upset Cinderford and clinch their fourth win of the campaign.

It is safe to say that Tonbridge Juddians have certainly started life at this level very positively, but the same cannot be said for fellow new boys Old Redcliffians who take the trip to Redingensians tomorrow. ORs currently sit in the relegation places and are already 10 points from safety at this early stage of the season. Saul Nelson’s men have lost six of their seven matches so far, with their only other result being a draw against Henley Hawks two weeks ago. They failed to take the opportunity to beat a possible relegation rival, London Irish Wild Geese, last weekend so the search for their maiden win at this level moves to Berkshire.

ORs have shown small shoots of recover in recent weeks, put they are in for a tough test this weekend as Redingensians are once again having a solid season at this level. Victory over Broadstreet last weekend moved the Rams up to fifth in the table and they welcome Old Redcliffians to Old Bath Road on the back of two successive wins. Redingensians are clear favourites to extend that run this weekend as Old Redcliffians aim to throw the form book out of the window.

Redruth’s blip in form continued last weekend as they lost narrowly against an in-form Canterbury. However, the Reds return to The Recreation Ground looking to make it a fourth straight home win on Saturday as they entertain ninth-placed Clifton. Pale Nonu’s side have made an impressive start to the campaign on home soil, with narrow victories aplenty against Bury St Edmunds, Worthing and Wimbledon respectively so the hosts will be hoping for more of the same come 3pm on Saturday.

Similarly, for Darren Lloyd’s side, the ability to put a good run together so far this season has hampered their progress, leaving them in a solid mid-table spot. Despite, having only won once on the road this term, that coming at Broadstreet in late September, the Lavender and Blacks will take heart from scoring nine tries in the last two trips away from Gloucestershire, including that aforementioned result at the Ivor Preece Field. The visitors will look to add to that total on Saturday as they aim to make it two wins on the spin following victory over Wimbledon in Round Six.

Bury St Edmunds may well have been frustrated on Saturday night after their defeat to league leaders Taunton Titans, but the Wolfpack would have taken a number of positives from that loss. Leading half-time against a side that has breezed past all before them is something to shout about and they welcome Worthing Raiders this Saturday, looking to channel those positives into a performance that can end a run of back to back defeats.

You’d be forgiven if you did sympathise with Worthing. The fixture list has not been kind to them, drawing the Raiders against the current top three sides in the division in their last three outings. A final minute heart-breaking defeat to Cinderford last weekend will offer Jody Levett’s side some encouragement as they head into this fixture, searching for their first win since early September. The Raiders will make the 149 -mile trip to East Anglia desperate to stop the rot of five straight defeats and begin their climb up the table.

A fortnight ago, Barnstaple produced a solid home win against Clifton, recording their first success in four attempts. Steve Perry’s side may have thought that could have been the catalyst to push on after a decent start to the season but, a 29-22 to Henley last time out halted their progress. Barum will look to the likes of Oli Mason and Gareth Evans once again to provide the inspiration to take the points as they host London Irish Wild Geese on Saturday. Both were influential in that victory against Clifton and the home faithful will be hungry for more of the same.

London Irish Wild Geese head to Barnstaple having won two of their last three matches which could prove crucial for the visitors come the end of the season. It is a big month for the men from Hazlewood and they began October with a solid win over Old Redcliffians. Now, they take on a side that battled to safety with last year and another win for the Sunbury-On-Thames side could lift them above their hosts this weekend.

For Wimbledon, it’s been a baptism of fire into the National Two South. Still awaiting their first win, the South West London outfit host Henley Hawks at Barham Road on Saturday. The Dons can be encouraged by picking up only their second bonus point as they ran Clifton close, narrowly losing 25-20 in their last encounter. Joe Gray’s side will channel that spirit into this Saturday’s fixture knowing another defeat may cut them adrift further in what is still a relatively early stage of the season.

An unbeaten streak of three matches as bolstered Henley’s start to this campaign, seeing them creep within points difference of the top half. Having lost the previous three games, Pete Davies’ men make the trip towards the capital on the back of wins against Broadstreet and more recently a 29-22 success over Barnstaple. In addition, a dramatic draw away at Old Redcliffians is sandwiched in between. Despite those results, the Hawks are yet to record a victory on their travels this season, but they may fancy their chances of breaking that duck in South West London as they look to continue this resurgence in form.