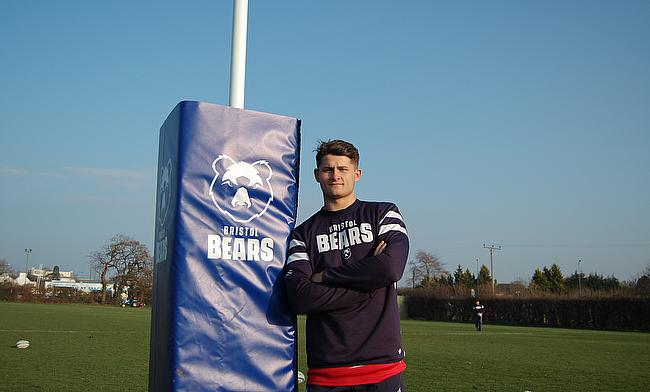 Despite the heart-breaking nature of Bristol Bears’ defeat last Sunday against Exeter Chiefs, Piers O’Conor, the latest young star to emerge at Ashton Gate, was in high spirits at Clifton RFC this week.

Summer arrival O’Conor has made an impression on Pat Lam and his staff after joining the Premiership returnees from former Championship rivals Ealing Trailfinders. The 23-year-old has stepped up to the plate both in his preferred position of outside centre and as emergency injury cover at fullback, starting five out of seven Gallagher Premiership fixtures so far this season.

Given the excitement surrounding O’Conor within the Bears camp, Ali Stokes headed to Bristol to chat to the man himself.

After earning an Academy contract with Wasps in 2013, the Australian-born utility back cut his teeth in the National Leagues whilst on loan to Henley Hawks, before going on to sign for Bedford Blues and Ealing Trailfinders in the Greene King IPA Championship, where the watchful eye of Lam identified him as a player of premier potential.

Whilst playing for seven clubs by the age of 22 exposed him to multiple cultures, styles of play and top-quality coaches, O’Conor notes that his time with Henley Hawks lit the blue touch paper, igniting his senior career with a first taste of men’s rugby.

#TOTW With 63% of the vote you chose this score from Piers O’Conor as the @meandccreative Try of the Week! pic.twitter.com/Yh9KGZYytG

“So obviously in the [Wasps] senior academy, most of the time you get put on loan,” O’Conor said. “I was fortunate enough to go to Henley. We actually had a really good team at the time, I think we went 15 games on the bounce.”

“Then I went to Bedford [Blues], which was another step up and a competitive team, then Ealing [Trailfinders] which was even more competitive again.

“Each year has been a step up, so I’ve taken massive things away from it all, physically, mentally and in every aspect of the game. I think every year has been like a step up and it’s put me in good stead.”

He continued: “Because you’re in the National Leagues, the level of rugby is slightly lower, so as a young player just trying to learn it’s the perfect opportunity to test yourself out and see if you are better than them.”

The former Ireland and England age-grade international also attributed the all-out attacking brand of rugby employed by former Henley head coach Pete Davies to his ability to seamlessly adapt to the enthused brand of rugby Bristol are playing under Lam.

“That was some quite exciting rugby, it was pretty expansive, he [Davies] didn’t like kicking the ball, similar to here.

“I’d actually say every club I’ve gone to has been quite expansive, love ball-in-hand and not a massive emphasis on kicking. I’ve relished opportunities to run with the ball and I think that’s helped me out.”

“I feel like that plays into my skillset, I much prefer to run the ball than kick the ball, so I’m happy.”

After stepping up at both fullback and outside centre for Bristol and exceeding the club’s pre-conceived expectations, O’Conor is happy to continue in a utility role, but leaves no doubts over the position he sees himself excelling within the Bears’ backline.

When questioned over his preferred jersey, he said: “I’d probably say thirteen. I prefer being in the front line, getting stuck in. But I’m honestly happy with either position, I just want to play. Literally all the positions I’ve played have helped me in different ways to improve my other positions.

“So when I moved to fifteen, that helped me improve my handling skills, my kicking, my footwork and my general engine and work rate. Then moving back into thirteen, having played at fifteen with more space, gave me the confidence with time on the ball and stability to read the game.”

The full interview will be out for @TalkRugbyUnion soon, but here’s a snippet of my chat with @bristolbears centre @oconorpiers

I have a feeling we may be hearing a lot more about this former @WaspsRugby man in the near future. pic.twitter.com/AG2gRW9QZm

As with any impressive youngster rising through the ranks, O’Conor will be well and truly focused on his role with Bristol, nailing down a starting berth in a competitive midfield. However, when it comes to international aspirations, he is pinning his allegiance to the English flag, despite qualifying for four tier one nations from a young age.

Born in Australia, O’Conor qualified for both his country of birth and New Zealand through his mother and both England and Ireland through his father, subsequently moving to English shores in 1998 as a three-year-old.  He then went on to feature for Ireland u19s against Australia in 2013, switching back to England later that year via the Sevens and u20s.

The Sussex-schooled star reaffirmed his desire to pursue a Test career with England, voicing his unwavering wish to wear the rose.

“Yes I’m partly Australian, but I wouldn’t really count it. Irish is such a small part of it. I don’t think it will allow me to play for the national side, so I forget about that. But my main focus is 100% on playing for England, that’s the goal.”