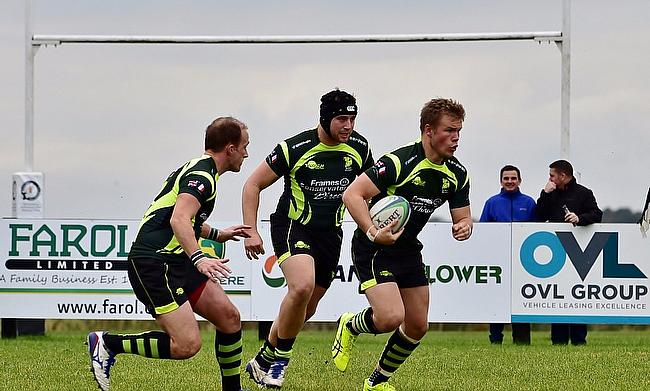 National Two South league leaders Taunton Titans made it nine wins in a row following a hard-fought victory over Clifton.

Tony Yapp’s men did not fail to disappoint and their latest victory keeps the Somerset club a point clear of second placed Chinnor who battled to a win over Old Redcliffians.

Cinderford remain just three points behind Taunton after an inspired Liam Hemming performance guided them to all five points against Broadstreet and Redingensians are now into the top four following a fourth straight triumph.

Also in the top half, Redruth secured their first win on the road and Bury St Edmunds produced a remarkable comeback to beat Canterbuy.

Down at the bottom, London Irish Wild Geese thrashed winless Wimbledon and Worthing Raiders secured a much needed victory over Tonbridge Juddians.

Taunton Titans remain a point clear at the top of National Two South after a hard-fought bonus-point win over Clifton.

The Titans flew out of the blocks at Station Road as Arun Struminski’s try gave the visitors the lead before Tom Popham and Gary Kingdom both crossed.

Clifton went over, but their try was quickly cancelled out by Sam Prior and it occurred once again before the break as Nick Mason wiped out the home sides’ second score of the afternoon.

The score line continued to ebb and flow after half-time as Clifton’s bonus point scores were matched by Ollie Rice and Brett Harvey going over, but it was a rampant first half that secured Tony Yapp’s side their ninth straight win.

Chinnor sealed their eighth win on the spin as they continued their fine form at Kingsey Road to beat Old Redcliffians.

Sam Hewick got one back for Old Reds before Scott Parsons dotted down for the visitors. Both sides then exchanged scores before the break, with Henry Bird responding to a penalty try.

Tom Price and Henry Lamont pulled Chinnor clear in the second period, but ORs kept plugging away as Hewick grabbed his second score of the day.

And just like at the end of the first period, both sides swapped tries as Luke Hibberd and Ethan Doyle crossed, but Chinnor had done enough to seal victory.

Liam Hemming scored 19 points against Broadstreet as Cinderford secured their eighth win of the season.

Cinderford were full of intensity from the off and went 15-0 up thanks to Kai Little and Matt Lane as well as Hemming’s boot.

The outside-half made it 20-3 with a score of his own, but Jeff Gregson went over for Broadstreet after a well worked move.

Redingensians ran riot in the second half against Barnstaple to seal their fourth win on the trot.

The Rams led 12-7 at the break thanks to a penalty try and a score from Conor Corrigan, while Hayler crossed for Barum.

But Barnstaple could not stay in touch with their hosts after the interval as Olly Foxley, Olly Poole and Andy Berry all crossed while visitors could only manage a Jordan Petherbridge penalty.

Redruth sealed their first away win of the season, ending Henley Hawks’ unbeaten run with a comfortable victory at Dry Leas.

Tries from Samuel Matavesi, and Ben Priddy helped put Redruth 20-15 up at the break, Marcus Lowe and David Hyde responding for Henley.

Henley hit back through Alan Awcock, but a third penalty of the day for Ashley Hosking and a try from Richard Brown wrapped up the win for the Reds.

Having trailed 21-5 at half time, Chris Lord’s try left the away side 24-21 up midway through the second-half before Brendan Mitchell completed the remarkable turnaround for Ollie Smith’s men.

Will Scholes’s try had given Bury the lead in this contest, but scores from JJ Murray, Tom Best and Barney Howard put Canterbury in control heading into the break.

However, Bury were to score 24 unanswered points in the second period and it began with Conan Osborne’s try, 10 minutes after the interval.

Dwayne Corcoran once again got himself of the scoresheet as Bury started to pounce on Canterbury mistakes and the visitors were then able to turn this game on its head as Lord and Mitchell sealed the win.

Hugo Watson’s try brought Tonbridge to within five points and when Jide Ajay was yellow-carded, the visitors turned their pressure into points as Will Colderick dotted down on the hour to give his side a 19-17 lead.

However, despite Colderick adding to scores from Watson and Luke Bellinger, the Raiders hit back as McLean used all of his experience to land two penalties and clinch a much needed win for Worthing.

It was a second home win on the bounce for Wild Geese who have now won three of their four matches at Hazlewood this term.

The hosts led 20-6 at the break in Sunbury-On-Thames and were rampant in the second period to secure a victory which moves them up to 11th in the table and 10 points clear of the bottom three.

As for the Dons, this was arguably their worst performance of the season and defeat for the newly promoted side means they are now 14 points adrift of safety as the search for their first win at this level continues.