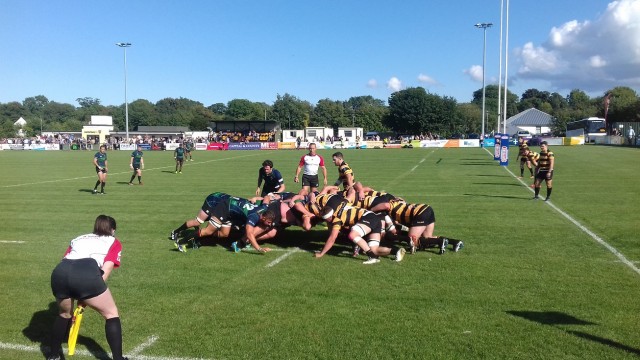 We review the first weekend of the new season in National Two South as new boys Tonbridge Juddians get off to the perfect start.

The team is expected to struggle and more than likely suffer an immediate relegation. In truth, National Two South went against that stereotype last season with the likes of Barnstaple and London Irish Wild Geese all avoiding the drop and there may well a new side to achieve just that.

After losing just once on their way to promotion last season, Tonbridge Juddians can now add one more tick to their ‘W’ column.

It is now 26 league wins from 27 matches in just over a year for TJs after they brushed aside Bury St Edmunds on the opening day of the season.

The three other sides promoted alongside the Kent outfit all suffered defeat while there were wins for Cinderford, Worthing Raiders and Henley Hawks.  Elsewhere, promotion hopefuls Chinnor were unable to convert a winning positon against Clifton.

Jack Simmons (2) and Nielson Webber ran in first-half tries to earn a 22-3 cushion at the break.

And, following their fifth place finish last season, the Reds showed just why they could challenge again this term as Richard Brown, Jack Oulton, Craig Williams, Chris Fuca and Tom Norton (2) all crossed in the second period.

Ashley Hosking and Joe Elderkin were both on good form with the boot for the hosts, while Dan Fry scored a late consolation for Old Redcliffians.

Murray Galbraith-Lowe (2), Hugo Watson and Cole Campbell went over for the visitors as they led 26-0 at the break against a shell shocked Bury side.

Murray Galbraith-Lowe completed his hat-trick after the restart and tries from Duncan Tout and Mike O’Sullivan secured a superb win.

A penalty try followed by scores from Harry Horne and Reuben Norville gave Cinderford the lead just after half-time, with Ollie Best and Aaron Cooper crossing for the hosts.

Canterbury narrowed Cinderford’s lead to just seven points when Dan Smart touched down, but tries from Norville, Horne and Joe Smart gave the Gloucestershire side the bonus-point win.

Taunton Titans comfortably beat newly promoted Broadstreet at Hyde Park to get the new term off to a winning start.

Gary Kingdom slotted over a penalty before a try from Stanley Mayne put Street ahead.

Aron Struminski then went over for a brace but the visitors were just a point behind going into half-time as Mayne grabbed his second.

Lee Chapman dotted down to put Broadstreet back in front shortly after the restart, but a yellow card to Sam Harcourt saw the Titans take advantage.

Toby East and Brett Harvey eased any nerves at Hyde Park before Kingdom and Ollie Rice both dotted down late on to complete the victory.

Barum, who survived relegation on the final day of last season, ran in five tries to pick up an opening day win.

Wimbledon managed just the one score on their National Two South debut, having led after 20 minutes, but Joe Gray’s men will be confident of an improvement as the season progresses.

Following a season of flirting with relegation last term, the Raiders began this season with a positive result.

The hosts were inspired by captain Liam Perkins who scored twice on his 100th appearance for the side, while Sam Hampson and Sam Boyland both dotted down.

The scores were level at 19-19 in the final quarter with Wild Geese’s points coming via Jack Cohen, Reon Joseph and Zaina Alexis Montout, but after suffering a yellow-card, the hosts were able to take the game away from their visitors.

Henley Hawks pulled off a wonderful second-half fightback to snatch a narrow victory of near neighbours Redingensians.

Jak Rossiter crossed following an interception for Redingensians, who then stretched their advantage thanks to Steve Bryant and a penalty try.

The Rams led 24-10 at half-time, but that was as good as it got for the visitors as the Hawks sparked into life.

Dave Hyde had gone over in the first period for Henley and in a half that saw several yellow cards brandished, Rob Bell and Dave Manning both scored in the second period to help the hosts to victory, while Connor Murphy guided them home from the tee.

Clifton came back from 14 points down to claim a draw in a tense opening day fixture against Chinnor at Station Road.

Leading 17-3, Matt Williams’ side saw their lead vanish in the final 20 minutes as Andy Chesters, Henry Harper and Callum Roberts all crossed to salvage a share of the points.

Chinnor, who finished level on points with eventual play-off winners Old Elthamians last term, were cruising after Phil Chesters and Danny Barnes had put them in front, but the Black and Whites were unable to see the game out and had to settle for a draw.