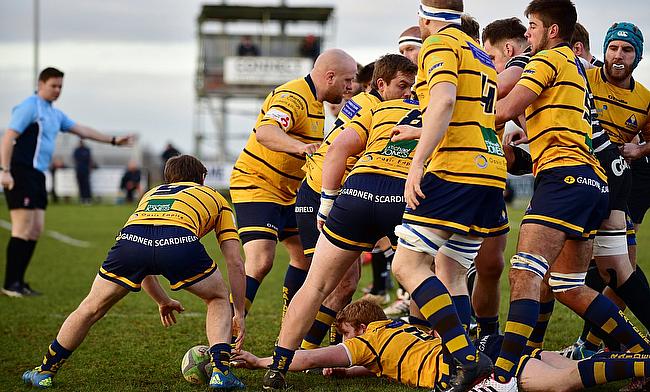 At this early stage of the season in National Two South, it is always tough to say who will be challenging for promotion come April.

However, with the way the likes of Cinderford and Taunton Titans have started this campaign, it does give you a snapshot into what could occur in the final months of this term.

The aforementioned sides have been unstoppable so far and they will look to continue their rampant start this weekend. Current table toppers Cinderford go to Henley while it is second against third with Taunton hosting the impressive Barnstaple.

Elsewhere, the only other side with a 100 per cent record is Worthing Raiders and they welcome Redingensians to Roundstone Lane tomorrow, while Chinnor visit London Irish Wild Geese and Clifton, Broadstreet, Wimbledon and Old Redcliffians go in search of maiden victories.

Cinderford head to Oxfordshire this weekend to take on Henley Hawks as they search for their third straight win of the season. It has been an excellent start to the campaign for Paul Morris’ side as they have racked up 16 tries in the opening two rounds to move to the top of the table at this embryonic stage of the term.

The Gloucestershire side look ruthless at present, but looking to stop them in their tracks will be Henley tomorrow. After a superb comeback against Redingensians on the opening weekend, the Hawks suffered a derby day defeat to Chinnor last Saturday, but there were certainly positives for Pete Davies’ men to take away from Kingsey Road seven days ago. Both Henley and Cinderford were relegated from National One in 2016, but which side will come out on top this weekend?

As we have seen over the last couple of seasons, Taunton Titans have flown out of the blocks and Tony Yapp’s side have once again made a flying start to a campaign. The Somerset outfit have scored 89 points in their first two games of the season and are back at Hyde Park tomorrow looking to continue their momentum.

I know we are only three weeks into the new term, but this fixture between Taunton and Barnstaple is second against third in the table. In truth, not many followers of National Two South would have expected Barum to be sitting in the top three after two rounds, but Steve Perry’s men have been excellent thus far. Their dramatic win against Redruth last Saturday emphasises that point and a win at Taunton tomorrow would certainly suggest that Barnstaple could be a different proposition in their second season at this level.

Looking to also be a different proposition this term are Worthing Raiders. After two successive seasons fighting off relegation, Jody Levett’s men have begun this campaign very positively. The Raiders have secured back to back wins against London Irish Wild Geese and Wimbledon and return to Roundstone Lane tomorrow as they host Redingensians.

The Rams head to West Sussex tomorrow on the back of a very comfortable win against London Irish Wild Geese. It was exactly what the doctor order for Mike Tewksbury’s men after their defeat to Henley Hawks on the opening day and they will now be aiming kick on from last weekend’s win. Redingensians won this corresponding fixture 29-24 a year ago so they will be hoping for a similar result this Saturday.

Matt Williams would certainly have been pleased with the way his side responded last weekend. Following a disappointing draw away at Clifton in Round One, Chinnor produced an assured performance against Henley Hawks to continue their impressive home record. The Black and Whites have not lost on home soil in 20 months, but their attention turns to their travels tomorrow at they visit Hazlewood.

The hosts, London Irish Wild Geese, just about kept their heads above water last term, but they have not started this season in a fashion which suggests they can avoid that same battle this year. Wild Geese have suffered back to back defeats against Worthing and Redingensians and the visit of a possible promotion challenger is not exactly the perfect fixture for Lee Starling’s men. However, the Geese could take a leaf out of Clifton’s book and make it a frustrating afternoon for Chinnor tomorrow.

Redruth would have been kicking themselves last Saturday evening. Victory against Barnstaple was in their grasp with two minutes to go in Devon, but two late tries saw Barum snatch the win off the Reds. Pale Nonu will now be hoping his side can produce a reaction as they look to get their season back on track when Wimbledon visit the Recreation Ground tomorrow.

Newly promoted Wimbledon are still trying to find their feet at this level. Following promotion via the National Three South play-off, the southwest London outfit have lost both of their opening two fixtures at this level against Barnstaple and Worthing respectively. The long trip to Cornwall awaits them this weekend, but having seen Barnstaple beat Redruth last Saturday, Wimbledon may feel that they could get a result tomorrow.

From the ecstasy of an opening day win, to a disappointing local derby defeat, it certainly has been an interesting baptism of fire for Tonbridge Juddians in National Two South. After impressing against Bury St Edmunds on Day One, TJs left themselves with too much work to do against Canterbury last week to claim their second win of the season so their attention must now turn to Clifton this Saturday.

The Gloucestershire hosts got their home campaign off to a positive start as they salvaged a draw against one of the potential promotion candidates Chinnor, but were quickly brought back down to earth last Saturday as they were thrashed by Cinderford. Clifton return to Station Road aiming for their first win of the season, but will know newly promoted Tonbridge Juddians will be a tough test.

Canterbury claimed their first win of the new season last week thanks to a commanding first half display against Tonbridge Juddians. Their performance in the second period would have been frustrating for Andy Pratt, but he knows the victory was the most important thing as they prepare to take on Broadstreet tomorrow.

The City Men have been inconsistent over the last two years so a win against Broadstreet on home soil this weekend would be a refreshing feeling as they aim to string a sequence of good results together. Newly promoted Broadstreet have struggled to adapt to life in this new division having suffered back to back defeats and another long journey awaits Paul Hurst’s side tomorrow as they go in search of their maiden win in National Two South.

Ollie Smith and Kevin Maggs would have been delighted with Bury St Edmunds’ response last weekend. After being outplayed by Tonbridge Juddians in Round One, the Suffolk side edged out Broadstreet to open their account for the season.  Bury are back on home soil tomorrow so they will be hoping for a much better afternoon than the one their endured at the start of the month.

Old Redcliffians’ time in National Two South has been a tough one thus far. ORs have shipped 106 points and have scored just 20 in their opening two matches where they faced Redruth and Taunton Titans. In truth, those two fixtures against possible promotion candidates were always going to be tough so this match against Bury St Edmunds could provide a better chance for Kevin Coster’s men to get off the mark.