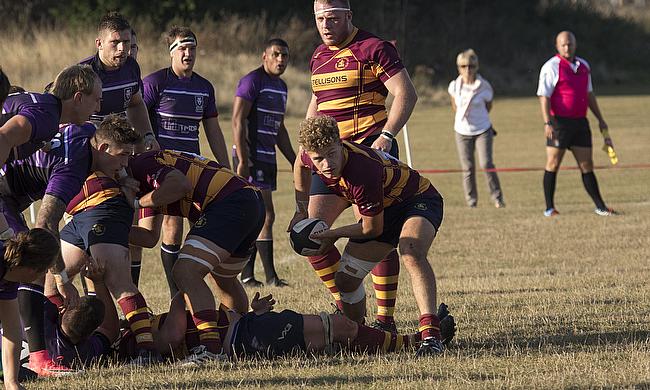 Westcliff are out of the bottom three following a brilliant performance against Esher whilst after numerous near misses in recent weeks, Bournemouth finally clinched a narrow victory over rivals Old Redcliffians.

Barnes also boosted their own hopes of avoiding a relegation scrap as they edged past Old Albanian and Sutton & Epsom so nearly followed suit, but they suffered a late defeat against third-placed Taunton Titans.

After an evenly matched opening quarter – which saw Toby May’s effort cancelled out by Dings’ Joe Hawkesby – five unanswered tries helped the league leaders race away from their visitors.

Duncan Tout crashed over to kick-start TJ’s dominance and the centre also scored again before the break after David Irvine had dotted down for the hosts.

David Priest got in on the act following the interval and Tout sealed his hat-trick to round off an excellent TJs display.

Henley Hawks’ top two ambitions continue to burn brightly, but they had to dig deep to see off an impressive Bury St Edmunds at Dry Leas.

Tries by Reuben Norville and Jack Robinson helped the second-placed side come from behind to rescue the victory.

Second-half scores from Tomas Milosevic and Garside, either side of a Kodie Drury-Hawkins penalty, gave the visitors an 11-point lead with 10 minutes remaining but Henley pulled off a dramatic fightback to snatch the victory.

Taunton Titans remain one point behind second-placed Henley Hawks as they escaped Sutton & Epsom with a hard-fought win.

After a scoreless first period, the Titans battled back from 12 points down thanks to scores from Greg Kitson and Isaac Dalton, before Gary Kingdom dealt a hammer blow to S&E as he landed a late penalty to snatch the win for Taunton.

Matt Whitaker and Michael Cooke had scored for the hosts, but despite the heartbreak of losing it at the death, this could turn out to be a valuable point in S&E’s fight for survival.

Clifton’s top two hopes were dented in Round 14 as Connor Gilbert’s late try clinched a dramatic victory for Redruth.

The Reds led 18-13 at the break thanks to a brace from Todd Prisk and eight points from the boot of Fraser Honey, whilst Tom Jones and Niall Gibbons dotted down for Clifton.

Brad Barnes also landed a penalty for the hosts and he was also able to add the extras when both Jack Clement and Gibbons crossed, either side of Dean Bonds going over for Redruth.

The Lavender and Blacks now led 27-25 and Clifton remained two points ahead after Honey’s penalty was cancelled out by James Dixon.

However, this nip and tuck contest had one final twist as Gilbert raced over with one-minute remaining to snatch the win for Redruth to leave Clifton seven points behind second-placed Henley.

Worthing Raiders returned to winning ways in National Two South after fighting back to beat Leicester Lions, who had Kaz Henderson sent off.

Tries from Curtis Barnes and Calum Waters put Worthing 14-11 up at the break, with Devon Constant going over for the Lions to add to Ben Young’s two penalties.

Henderson’s score on 45 minutes put the visitors ahead for the second time in the match, but Worthing responded as Matt McLean landed a penalty before Liam Perkins took full advantage of Constant’s yellow-card.

With five minutes to go, the Raiders held a 24-16 lead and any hopes of a dramatic Lions comeback were dashed when Henderson was red-carded and McLean pinged over a penalty to add insult to injury.

However, the away side did have the final say as Ed Sumpter dotted down to secure a losing bonus-point but the Lions couldn’t rescue the victory late on.

Westcliff beat Esher to move out of the relegation places in National Two South.

A penalty from Gus Locke and a try via James Booth helped the away side into a 10-8 half-time lead, with Kostas Dellas crossing for the hosts.Fly-half Jack Jones also landed a penalty and his converted try just before the hour put Westcliff in front. It got better for the home side six minutes later as Joe Vandermolen powered over to make it 22-10.

Esher set up a tense final 10 minutes after replacement Adam Bullett scored, but Westcliff held on to move one point clear of the drop.

Barnes have boosted their survival hopes in National Two South after a narrow win over Old Albanian.

The London-based club are now three points clear of the drop thanks following their first away win since September.

As for OAs, it is now three defeats in a row for James Buckland and James Osborn’s side and the Hertfordshire outfit travel to Dings Crusaders next week as the domestic season reaches the halfway mark.

The scores were level at half-time as Josh Hallett’s effort was matched by Barnes’ Jamie Collins before both sides swapped penalty tries.

It was first blood to Barnes after the break as Conor Harbison touched down, but back came OAs as Tom Bednall darted over.

The pendulum swung back in Barnes’ favour as Harry Salisbury was next to cross and despite Nic Defeo rounding off a special OAs move to bring his side back into contention, it was too little too late for the hosts.

Dan Fry’s early try was matched by Bournemouth’s Alex Sutherland, but his second score helped the visitors into a 17-12 half-time lead.

Dan Stewart had crossed for the hosts whilst Ashley Groves pinged over a penalty and the latter added another three points to his and Old Reds’ total after Hancox’s effort from the tee.

The pendulum then swung in Bournemouth’s favour as two more kicks from Hancox gave them a 21-20 lead, but with three minutes remaining, the Lions thought they were going to suffer another heart-breaking and frustrating afternoon when Groves landed another penalty.

However, it was Bournemouth’s turn to end up on the right side of the result and the ever-reliable Hancox held his nerve to clinch a precious win for the hosts. The victory leaves them six points from safety whilst defeat for Old Reds has seen them slip into the bottom three.