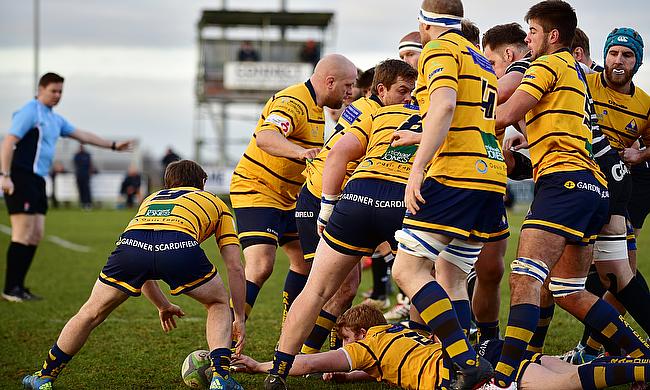 Worthing Raiders and Exmouth both secured vital victories against relegation rivals to give themselves a chance of avoiding the drop.

Worthing picked up their first win in three months against Barnstaple to move to within three points of saftey while Exmouth continued their fight with a victory over Barnes.

The battle at the bottom is as intense as it is at the top as the promotion race continues to gather pace. Chinnor remain at the summit after a superb win over Cinderford while Bishop’s Stortford kept on the coattails of the Oxfordshire side with a victory against Taunton Titans.

The aforementioned Titans may still be harbouring promotion ambitions, but that defeat to Stortford may well have ended their hopes for this season. The same could be said for Redruth who were beaten by Old Elthamians with OEs still very much in the hunt for a top two finish.

Centre Broughton went over for Chinnor’s only try of a frustrating first-half as Cinderford held a 17-10 lead at the break thanks to brace from Harry Robinson and a score via James Moffatt.

However, Cinderford were unable to improve on their tally after the restart as the league leaders took control of the
contest.

Jonny Bentley landed a penalty for the hosts before a second score for Broughton and a penalty try put Matt Willaims’ side ahead.

Davis then grabbed his double in the last 10 minutues either side of Kieran Goss’ score as Chinnor secured their sixth win in a row.

Bishop’s Stortford can replace Chinnor at the top of National Two South this coming weekend after they clinched a bonus-point victory over Taunton Titans in Round 23.

This win for Stortford keeps them level on points with Chinnor, but Andy Long’s side have a game in hand against
Canterbury in five days time and a victory could see them move to the summit of this division.

A superb second-half performance against Taunton helped them stay hot on the heels of Chinnor after a tight first 40 minutes.

Dan Frost crossed from close range to open the scoring, but Stortford showed just way they are in this title race as Nick Hankin made the game all square. Gary Kingdom and Tom Banks made sure it stayed level at the break as both sides exchanged penalties.

However, there was nothing close about the second period as Stortford blitzed their hosts. Banks slotted over another penalty before Sam Winter, Hankin and Seb Brownhill all crossed to complete a huge win for Stortford as their quest for promotion continues.

Old Elthamians strengthened their promotion bid thanks to this away victory over Redruth while the hosts’ hopes of a top two finish are now hanging by a thread.

Pale Nonu dived over from close range to score the first try inside the opening minute, but scores from Dominic Lespierre and Will Robinson put Old Elthamians 14-7 up at the break.

Jack Oulton’s converted try levelled the game on the hour before Brett Rule gave the Reds a three point lead from the tee.

However, Rule was to be outdone by his opposite number Robinsion who landed two penalties in the final quarter of this match to seal a crucial win for the OEs in this promotion race.

Redingenians held on for their fourth straight victory as they beat Bury St Edmunds at Old Bath Road.

Ollie Foxley and Jacob Atkins crossed in the first period for the Rams and the fly-half also added eight points from the tee to give his side an 18-0 lead at half-time.

Bury claimed their first try of the afternoon three minutes into the second period as Maku Koroiyadi crossed, but the Rams responded immediatley as Atkins grabbed his second score.

Bury battled back in the final 15 minutes to secure a losing bonus-point thanks to tries from Shaq Meyers and Donovan O’Grady, but it was too little too late for the Wolfpack who are now only three points clear of the relegation places.

Henley Hawks continued their surge away from the bottom three as they beat Canterbury at Dry Leas.

First-half tries from David Manning and Sam Portland helped Henley into a 13-12 lead at the break with Tom Rogers (on his 200th appearance for Canterbury) and Kieran Thompson crossing for the visitors.

Henley then took control after the interval. A Dave Clements try plus five points from the boot of George Jackson put the hosts 11 points ahead.

Guy Hilton reduced the deficit as he knocked over a penalty, but a Simon Perry score put Henley back in the driving seat.

Jake Albon was then sin-binned in the final 10 minutes for Henley and Canterbury crossed for their thrid try of the
afternoon via Kyan Braithwaite.

However, Henley had the final say as Liam O’Neil sealed the win for the home side.

Clifton secured their second away win on the spin thanks to a dominant five-try victory over London Irish Wild Geese.

A converted try and a penalty from James Newey gave Clifton a 10-7 interval lead after Joe Touna had opened the scoring for the hosts.

Worthing Raiders ended a losing run of 10 games as they beat relegation rivals Barnstaple in an exhilarating encounter at Roundstone Lane.

The hosts scored five tries for a bonus point as they halted their winless run. Their first victory since November now
means the Raiders are just three points adrift of saftey with a game in hand against Old Elthamians this coming Saturday.

A hat-trick from Harry Forrest plus tries from Finlay Coxon-Smith and Kariym Irving gave the hosts a 32-14 lead.

Matthew Gohl and Jordan Petheridge hit back for the visitors in the final 20 minutes adding to the earlier scores from Isaac Hydleman and Steve Perry, but it wasn’t enough for Barum to snatch the victory as the relegation battle continues to intensify.

A late try from Mark Wathes gave Exmouth a vital victory over Barnes in their bid to avoid relegation.

Barnes ran in three tries in the opening period as Ed Aulterac, Fraser Carlisle and Gareth Williams-Davis crossed to lead 20-11 at the break. The Cockles’ points came via George Meadows’ boot and try from Tom Bedford.

Scores from Issac Dalton and Dave Bargent put Exmouth five points ahead going into the last 10 minutes, but a length of the field try for Barnes levelled the game up.

However, there was to be one final twist as Wathes ran 40 metres to score and snatch a much needed win for Jon Hill’s side who are now 10 points from saftey.