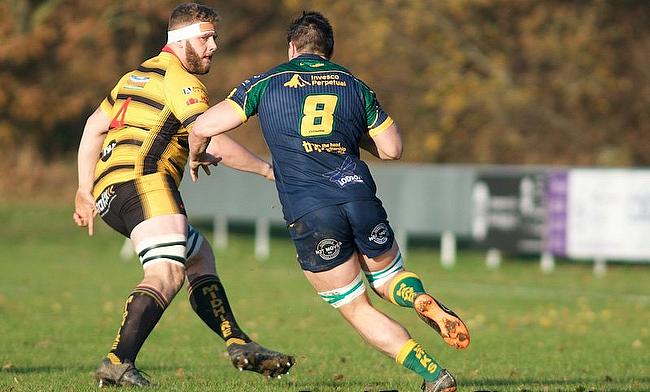 Henley Hawks and Birmingham and Solihull will head into Round 25 of the National Two South season aiming to enhance their respective aims for the remainder of the campaign.

The Hawks are currently embroiled in a battle for a top two finish and Nigel Dudding’s side are four points off second place, while their opponents on Saturday are fighting to avoid relegation.

Pete Glackin’s men picked up a crucial win last week and now they sit eight points shy of safety so Henley’s rivals will be hoping the Bees have a sting in their tail on Saturday.

As things stand, Canterbury are the side who occupy the play-off spot and they will be looking to stay in control of their own fate when they visit London Irish Wild Geese, a team which is battling against Birmingham and Solihull for survival.

In terms of Birmingham and Solihull’s nearest competitors, Barnes entertain Worthing Raiders on Saturday while Old Redlcliffians take on bottom of the table Guernsey.

Elsewhere, the battle for sixth place will continue on Saturday as Redruth take on Bury St Edmunds and Clifton make the journey to Old Albanian.

A win to keep a promotion challenge on track is always pleasing at this stage of the season and Rams RFC’s triumph over Dings Crusaders in Round 24 was no different. The league leaders ran in eight tries in Bristol as Seb Reynolds’ men maintained their 12-point lead at the summit with just six games in the season to go. Their title bid has hardly hit a bump in the road all season, but their ambitions to go up automatically into National One will be put to the test as a strong Taunton Titans side visit Old Bath Road this weekend.

Another fine win for @Rams_RFC as Andrew Denham grabs a hat-trick and Ben Henderson scores a stunner – https://t.co/QSfKmEKrpS

Tony Yapp’s men arrive in Berkshire after a narrow victory over Barnes and the result was the perfect response from the Titans after a tough defeat against play-off rivals Henley Hawks at the end of February. Taunton are nine points behind second placed Canterbury so the odds are stacked against if they are to finish in the top two, but they have more than enough quality to cause the table toppers problems as they aim to become the first side to beat Rams on their own patch for almost 14 months.

The pressure doesn’t look like it is getting to Canterbury. Last Saturday, the City Men secured their sixth win in a row as they brushed aside Guernsey to stay in control of the play-off spot in National Two South. Andy Pratt’s side have been relentless since their defeat to Dings Crusaders back in January and the way the Kent-outfit are performing, they don’t look like wobbling any time soon.

Canterbury sit four points clear of nearest challengers Henley Hawks and they will be strong favourites to maintain or even increase that gap when they visit London Irish Wild Geese in Round 25. The hosts suffered a major setback in their own season ambitions as last weeks’ defeat to rivals Birmingham and Solihull has left Eddie Fraher’s men 14 points from safety with six games to go. Over the last two years, Wild Geese have managed to dig themselves out of trouble, but it would a remarkable escape if they were able to achieve that goal for the third year running.

It was the turn of Dan Barnes to grab the headlines for Henley Hawks last week. His superb hat-trick helped Nigel Dudding’s side fight their way past Clifton, but it was far from a straightforward afternoon for the Hawks. However, all that matters for Henley is the bonus-point win and it keeps them within touching distance of second-placed Canterbury as we enter the final stages of this campaign. The men from Dry Leas have also won their last six games, but they will come up against a Birmingham and Solihull side with confidence behind them this weekend.

The Bees produced an excellent display in a crunch match with London Irish Wild Geese in Round 24 and it means the Midlands club are now eight points shy of safety with six games to play. Their recent home form has given Pete Glackin’s side a real chance of avoiding relegation, but now they will be aiming to translate their displays at Portway on to the road. They have lost their last four matches on their travels, but a positive result at Henley would only enhance their survival hopes.

It is now just one defeat from their last 16 matches for Tonbridge Juddians after they secured a well-deserved victory over Old Redcliffians in Round 24. Peter Dankert’s side have been flying since October and their consistency has kept them in the conversation for a top two finish, even if they do sit seven points behind second-placed Canterbury.

All TJs need to keep doing is churning out victories and they will be keen to make it eight wins on the bounce when they host Dings Crusaders. The visitors take the trip to Kent on the back of a heavy defeat against Rams RFC and their indiscipline cost them against the league leaders. Dings have won just one of their last six games and the 11th placed side will be aware that two or even three more wins should be enough to keep them in National Two South for another season. That, in itself, would mark a very successful campaign for Luke Arscott’s side so they will be searching for a positive outcome at the Slade in Round 25.

The battle for sixth place is one of the highlights of the week in National Two South as Redruth travel to Bury St Edmunds. The visitors currently occupy a top six position following their fourth consecutive home win last time out. Nigel Hambly’s side beat Old Albanian, but the Director of Rugby is still asking for more from his team as the Reds aim for their first away victory since the end of November on Saturday.

In terms of Bury, Nick Wakley’s men ended a run of successive defeats by narrowly beating Worthing Raiders in Round 24. The Wolfpack are now only behind Redruth in the table because the Cornwall outfit have won one more game than them, but a home victory against the Reds on Saturday would keep Bury on course for their joint-best finish in National Two South.

Two other clubs who may be harbouring a top six finish meet on Saturday as Clifton take the trip to Old Albanian. The away side come into this Round 25 clash after a very encouraging display against Henley Hawks last time out. Matt Salter’s side battled back from a slow start to lead the Hawks at one stage, but their lack of accuracy proved to be Clifton’s downfall as they fell to a defeat at Station Road.

Nevertheless, they will take positives into this weekend while Old Albanian will be looking to bounce back after losing to Redruth in Round 24. I think it is fair to say the club have got an eye on next season already as they look to build their way back up to National One and with James Buckland at the helm, they will also like to finish the season with a flourish. OAs did win their last fixture at Woollams so can they make it two home wins on the spin this weekend?

If this was the final weekend of the season, I don’t think Worthing Raiders would be complaining too much. That may sound harsh, but Jody Levett’s side have hit a rut in form since the turn of the year and last week’s lost to Bury St Edmunds means the Raiders haven’t won in seven games. Their results have seen them fall to 10th in the table and while a relegation battle doesn’t look likely for Worthing, they could really do with a shot in the arm this weekend.

The men from Roundstone Lane visit Barnes on Saturday and the home side head into Round 25 with some encouragement. A victory over Dings Crusaders was most welcome for Joe Gray’s side and despite falling to a narrow defeat against a quality Taunton Titans outfit last weekend, they still produced a positive display. However, after Birmingham and Solihull’s win in Round 24, Barnes are only eight points clear of the relegation places so they will be hoping their improved performances can continue this weekend as they look to confirm their status in this division for another term.

After a solid run of form across the Christmas period and into the New Year, the last few weeks have been tough for Old Redcliffians. Saul Nelson’s men have lost three of their last four games and that has just taken the shine of what has been a very pleasing few months for the Bristol-based club. Granted, two of their recent defeats have come against high-flying Rams RFC and Tonbridge Juddians, but Old Reds are now nine points clear of the bottom three.

There is still a cushion between themselves and the drop zone, but the men from Scotland Lane can take a step towards another campaign at this level when they face relegation-threatened Guernsey on the weekend. The Raiders currently sit 18 points off safety with six games remaining and their latest loss to Canterbury was their fourth on the bounce. Injuries have really plagued Guernsey’s debut season in National Two South, however, they may be able to create a glimmer of hope for themselves if they can get the better of Old Redclififans on Saturday.