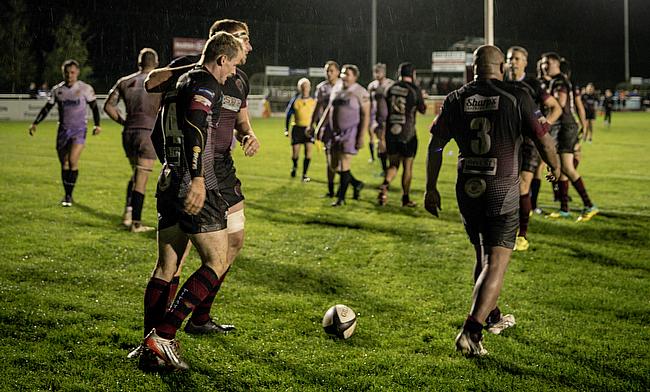 Tony Yapp’s side edged a compelling battle between two of the division’s frontrunners to move to the top of the table and after Saturday’s action, the Somerset side remained at the summit.

Tonbridge Juddians, who began the day in pole position, were unable to pick up a bonus-point during their win over Redruth so Peter Dankert’s men are now one point behind Taunton.

Henley Hawks are also up to third following their triumph over Old Albanian, whilst Esher and Leicester Lions are still very much in the frame after victories against Bournemouth and Bury St Edmunds, respectively.

At the wrong end of the division, Westcliff created a new piece of club history as they secured their first ever win at this level. Rick Compton and Jacob Ford’s side defeated Worthing Raiders away from home to open their account for this season and they are now just two points off safety.

Elsewhere, Dings Crusaders ground out a hard-fought win over Sutton & Epsom and Old Redcliffians left it late to clinch a victory against Barnes.

Jack Arnott scored a hat-trick in an enthralling second half as Taunton Titans defeated Clifton to move to the summit of National Two South.

Chris Courtier scored the first try of the evening for Taunton, but his side trailed 8-7 at the break with Cameron McDonald landing a penalty for Clifton before Bentley Halpin scooted over.

Great turnout tonight at the @Towergate Stadium despite the weather. Thanks for all the support and @cliftonrugby for a good game. Travel home safe and see you all soon!

However, Taunton raced clear in a blistering spell and Arnott was at the heart of it. The winger scored a seven-minute hat-trick before Isaac Dalton also crossed as the Titans built a 35-8 lead.

Clifton refused to roll over, though, and scores from Henry Harper, Finlay Sharp and Niall Gibbons rescued two points for the Bristol outfit, but it was Taunton who were able to go top.

Tonbridge Juddians have been knocked off top spot by Taunton Titans despite securing a victory over Redruth.

TJs failed to secure a bonus-point which means they are one point behind Taunton as the race for a top two position begins to heat up.

Tries by Hugo Watson and Ryan Jackson gave the hosts a 10-7 interval lead, with Ben Fox touching down for Redruth.

After the break, the Reds couldn’t add to their tally despite receiving penalties in kickable positions and instead, it was the boot of Will Robinson on 42 minutes which ultimately won the game for TJs.

Henley Hawks edged closer to the top two in National Two North after clinching a home win over Old Albanian.

The hosts have moved up to third in the table and they sit just three points behind second-placed Tonbridge Juddians as the opening two months of the season come to a conclusion.

Jacob Albon gave Henley the perfect start with a try after four minutes, but OAs held a 13-12 lead at the break with fly-half Joe Butler converting his own score and kicking two penalties.

His opposite number, Ben Bolster, nudged over three points at the start of the second-half to put the Hawks in front and Ewan Fenley’s effort, to add to Charlie Hughes’ score in the first period, made it 22-13.

Back came OAs through Michael Hogan with 12 minutes to go, but Henley were able to see out the game as Bolster landed another penalty to secure the win.

Esher ended October with a 100 per cent record for the month as they overcame Bournemouth to seal their fourth straight win.

James Chaumeton opened the scoring from the tee for Esher before Jack Walsh crossed to give the visitors a 10-0 lead at the break.

Another great win for the EEEs, though Bournemouth gave us a much tougher time than the scoreline suggests. Commiserations @bournemouthrfc and all the best for the rest of the season

Two tries in 10 minutes from Thomas James and Sam Druce put Esher in complete command and it proved to be enough to seal the victory.

Gianluca Firetto crashed over for Bournemouth’s only try, but this was another strong showing by Peter Winterbottom’s side.

Leicester Lions battled to victory over Bury St Edmunds as they maintained their 100 per cent record at TMDP Park.

The Midlands club, who are competing in this division for the first time, knew their home form would be vital this season and this win over Bury was their fourth consecutive victory on their own patch.

After a scoreless first-half, the Lions sparked into life. Ben Young landed a penalty just after the hour before Drew Rudkin and Ethan Godefroy both crossed in the final five minutes to wrap up the win.

Dings Crusaders halted a three-game losing run as they sealed a battling victory over Sutton and Epsom.

The Crusaders were looking for their first win of the month and managed to do achieve that aim in challenging weather conditions.

A try by Sutton & Epsom’s Alex Mount was not the start Dings had planned, but the visitors responded before the break as Ollie Millner’s penalty was backed up by a score from Joe Hawkesby.

The reliable boot of Millner helped Dings control territory after the interval and the decisive moment in this contest came via Hawkesby again as his second score clinched the win for the away side.

Old Redcliffians returned to winning ways in National Two South as a late try from Kieran Ward sealed a victory over Barnes.

A first-half try from Ryan Seabright and a penalty from Josh Hammett gave Barnes the lead, but Chris Pursall responded for the hosts just before half-time.

Old Reds then went ahead through Ethan Doyle and they held a slender four-point lead until the final 10 minutes of this contest.

Barnes then went in front as Nick Van Buuren touched down, however, there was to be a late twist as Ward dotted down for a converted score to hand Old Reds their third victory of the campaign.

Westcliff ended their seven-match winless run by coming from behind against Worthing Raiders to record a first victory of the campaign.

Curtis Barnes darted over to give Worthing the lead after 17 minutes and a penalty from Matt McLean made it 10-0.

But a try from centre Rob Smith and 11 points from the boot of the impressive Greg Bannister saw Westcliff lead 16-10 in the final quarter.

Tom Gwyther’s second try in as many weeks for Worthing went unconverted and the Raiders also missed a penalty with five minutes remaining.

Worthing were still trailing by a point, but Westcliff’s long wait for their maiden victory at this level was finally over when Bannister kicked his fourth penalty of the afternoon two minutes from time.