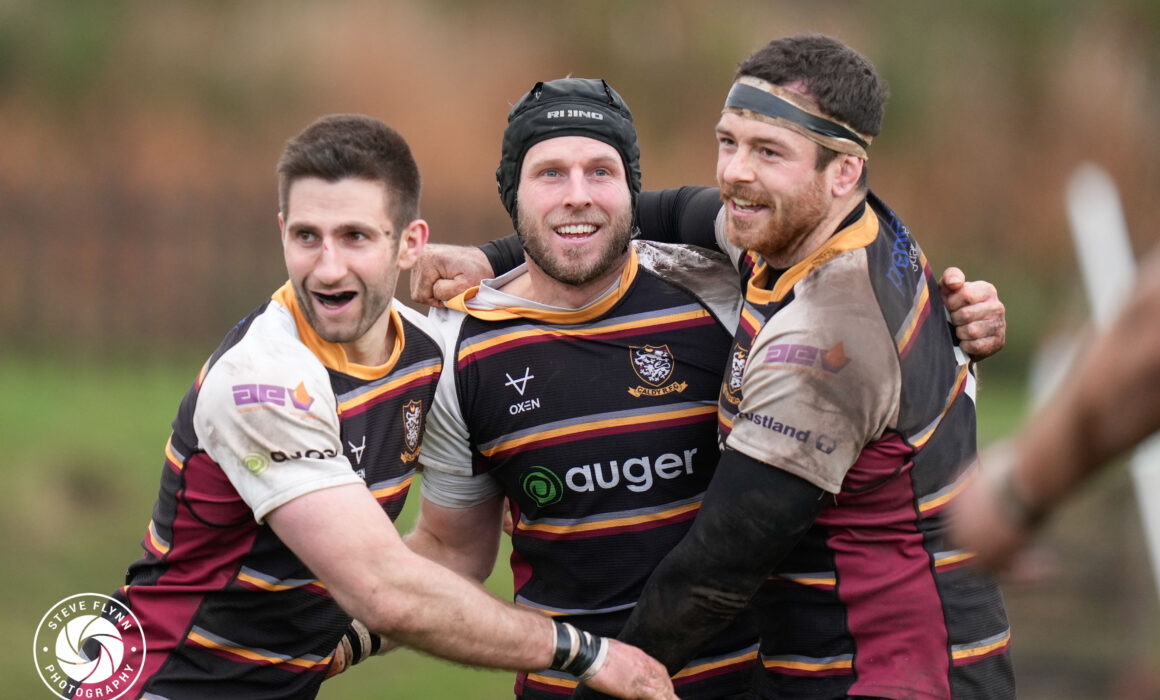 The National Leagues delivered yet another compelling weekend with significant movements at the top of all three divisions. Photo Credit: (Steve Flynn)

Rosslyn Park edged out Leeds Tykes 19-13 at Headingley Stadium to remain on top of the pile in National One.

Arthur Ellis’ try put Park ahead, but Seremaia Turagabeci jinked his way into the corner to level the scores after 15 minutes.

Tries from Hugo Ellis and Lewis Jones, either side of a penalty from Tykes’ Connor Lloyd, put the league leaders in control in Yorkshire, but the home side did secure a losing bonus point as Charlie Venables’ penalty on 58 minutes proved to be the final change to the scoreboard.

Nick Royle scored a sensational second-half try to secure a 26-24 victory for Caldy over Cinderford as the Wirral outfit lifted themselves to third in the National One standings.

Tries by JJ Dickinson and Ben Jones put the hosts in front, but James Elliot replied on the stroke of half-time to cut Caldy’s lead to 12-10.

Max Wilcox then moved Cinderford ahead with an incept try before Caldy wrestled back the advantage thanks to a penalty try on 55 minutes.

The topsy-turvy nature of this contest continued into the final quarter as Will Baldwin did superbly to gather a cross-field kick and stretch over the line to give the visitors the lead.

However, a moment of individual brilliance from Royle saw him collect his own kick to slide over and seal another eye-catching win which leaves the Wirral outfit just one point behind second-placed Cinderford.

Down at the other end of the table, Plymouth Albion moved out of the bottom three as they clinched a 31-17 bonus point win against Bishop’s Stortford at Brickfields in testing weather conditions.

After Albion led 14-0 following Henry Clement’s opener and a penalty try, Stortford cashed in on some ill-discipline from the hosts to reduce the arrears to 14-12 at the break thanks to the boots of Dan Powell and George Cullen.

But winger Shea Cornish darted through the Stortford defence to once again give Plymouth some breathing space in this encounter.

Craig Duncan then went over for the bonus point before adding a second, only after the visitors had pulled one back through James Ayrton.

In The National League Rugby Review Show’s Key Game of the Week, Cambridge continued their brilliant campaign as second-half tries from Joe Green, Andrew Henderson and Matt Hema was enough to shake off Sale FC and earn a 17-14 win at Volac Park.

It is now one defeat in 12 matches for the Blood and Sand, who sit just four points off second spot.

Elsewhere in National One, Taunton Titans stretched their unbeaten run to four matches as George Gosling dotted down on two occasions to help his side to a 24-14 win over Darlington Mowden Park whilst Andrew Humberstone’s try four minutes from time snatched a 22-19 victory for Rams RFC against Tonbridge Juddians.

Also in the third tier, Birmingham Moseley kicked off the New Year with a 22-17 triumph away at Blackheath.

Hull sent out another statement of intent in National Two North as the table-toppers ran in six tries to secure a seriously impressive 48-5 win over Stourbridge.

A solid scrum led to Mike Adlard scoring his first try of the afternoon and the hosts kicked on from there as Will Hall and Loma Kivalu both crossed.

Stour then sparked into life and waves of pressure led to both Steve Johnson and Ali Thompson being sin-binned, which the Midlands club used to their advantage as Dan Rundle scooted over.

But the league leaders weathered the storm and were able to control the second half as Adlard wrapped up his hat-trick whilst Laurence Cowen, Thompson and Reece Dean also crossed to seal a sixth straight win for Gary Peace’s side.

Hull are now four points clear at the summit, but Rotherham Titans have their fellow Yorkshire compatriots in their sights after they dramatically held on to a 13-12 win over promotion candidates Sedgley Park.

With the clock in the red, Matt Gallagher’s try handed Sedge the opportunity to steal the win at Clifton Lane, but Steve Collins saw his conversion narrowly miss the target as the Titans’ unbeaten record remained intact.

The hosts dominated the first period as Harry Newborn’s superb try was backed up by eight points from the boot of Matt Minogue.

Sedge then hit back after the break through Gallagher’s first score, but The Tigers couldn’t clinch the victory at the death.

📺 The National League Rugby Review Show: Round 16@WMuggleton brings you the best tries and biggest moments from the weekend.

The Lancashire club are now five points off the top, and Fylde are one point further back in fourth place after beating Loughborough Students 32-28 in an entertaining contest.

Scrum-half Matt Sturgess scored two tries – and Henry Hadfield and Tom Carleton one apiece – as Fylde held a 26-7 lead at the beginning of the second period.

But the visitors had to survive a resurgence from Loughborough as Dave Aniebonam and George Barber both scored to pull the Students right back into the match.

Greg Smith’s penalty wasn’t enough to halt the revival from the hosts as Dan James capitalised on a Scott Rawlings yellow-card to cut Fylde’s lead to just a single point.

However, Jack Shine’s sin-binning handed the away side the chance to secure the win and Smith landed the resulting penalty late on.

There was also drama at Corbridge as Hull Ionians (6th) rescued an 18-18 draw against Tynedale thanks to Thomas Peters’ converted try on 80 minutes.

Elsewhere, Liam Reeve’s accuracy from the tee helped Chester claim an 18-13 win over Luctonians, whilst Curtis Wilson’s try with nine minutes to go was enough for Sheffield Tigers to beat Wharfedale 13-9 at The Avenue.

Also in Round 16, Bournville secured their first away win since the opening day of the season as they defeated Harrogate 24-17 and Tom Hodson was the star of the show for Huddersfield as Gareth Lewis’ side scored five tries to beat Blaydon 35-19.

The Lavender and Blacks led 21-15 at half-time as tries from Harry Bate and Brad Talbot (2) were responded to by Dan Martin and Zach Bean.

But the hosts stormed clear of the away side after the break, with Charlie Powell and Alex Giltrow both crossing before Bate grabbed his second.

Devon Constant added a late try for Leicester Lions, but Clifton’s rapid start to the second half proved to be the difference in Bristol.

Esher extended their winning run to eight matches following a 37-32 victory against Dings Crusaders, but they were made to battle for their latest success at Molesey Road.

Tries from Dan Rowland, Pierre Thompson, Matt Lowes and Cameron Wilkins – plus 17 points from the boot of Sam Morley – means the Eees are now one point off the top with two games in hand.

However, this was never a comfortable afternoon for Peter Winterbottom’s side as scores from Tom Wilstead (2), Waylon Gasson and Harry Rowson kept the Crusaders firmly in the contest throughout and they deservedly left Surrey with two bonus points.

Our next 3 home matches:

Redruth’s own promotion challenge was dented in Round 16 as Barnes grabbed a last-gasp 17-14 win at The Recreation Ground.

With the scores level at 7-7 at half-time, with tries coming from Ed Berridge and Ben Fox, Barnes moved their collective noses in front through the boot of Rob Kirby.

A Chris Fuca try then handed Redruth the lead with just over a quarter of the game remaining, but there was to be more late drama in Cornwall as Angus Farquhar darted under the sticks to snatch the victory and extend Barnes’ unbeaten run to six matches.

The Reds are only two points off the top despite this setback, but Henley Hawks and Worthing Raiders are breathing down their necks.

The Hawks (4th) survived a late fightback from Hinckley to earn a 29-27 win whilst Worthing played the majority of the second half against Bury St Edmunds with 14-men after Liam Perkins was sent off, but they were still able to seal a gusty 20-14 triumph in Suffolk.

Elsewhere, Old Albanian managed the challenging weather conditions the better as they defeated Canterbury 12-3 at The Marine Travel Ground.

Guernsey v Rochford Hundred and Westcliff v Barnstaple were both postponed due to Covid-19 concerns.