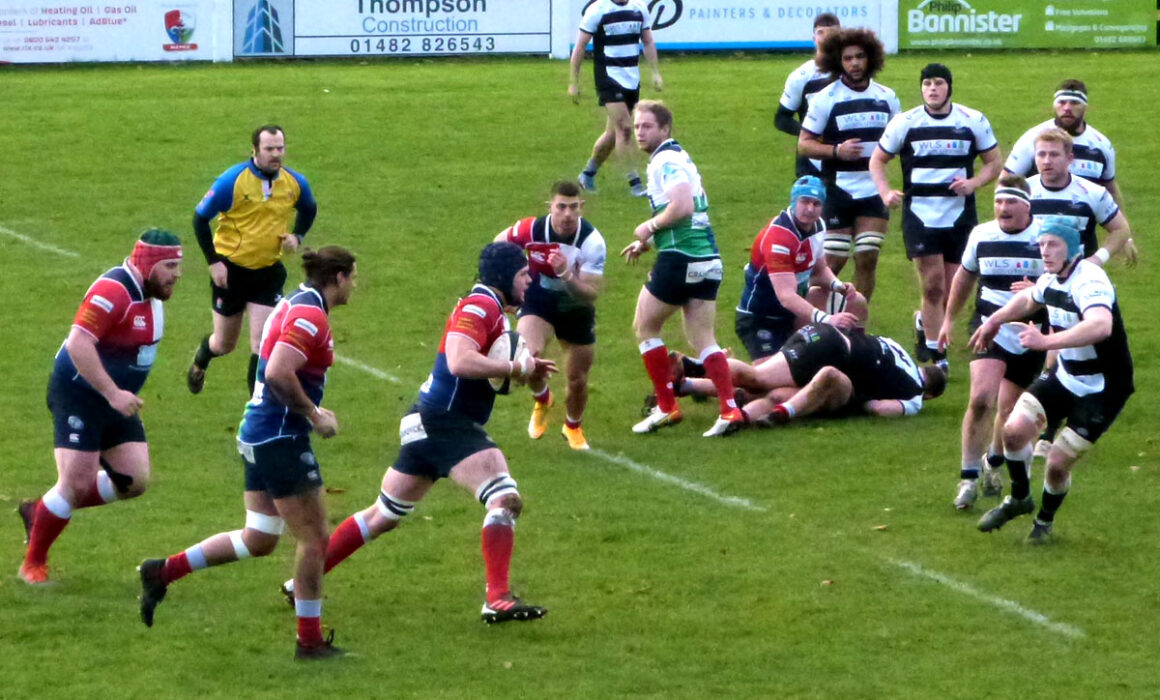 Despite the disruption caused by Covid-19, the National Leagues still provided us with some Christmas cheer across Round 15. Photo Credit: (Hull Ionians)

Cinderford ended 2021 by returning to winning ways as they sealed a solid 26-13 victory over Birmingham Moseley at Dockham Road.

Behind to an Isaac McNulty try and two penalties from Oliver Allsopp, the hosts moved 14-13 ahead as Nathan Taylor dotted down from close range for his second score of the afternoon.

And it was Taylor’s replacement – Jack Preece – who made sure Paul Morris’ side concluded the year in a positive fashion as he also grabbed two tries to ensure Cinderford moved back up to second in the National One standings.

The Foresters have leapfrogged Sale FC in the table as the North West side saw their winning streak come to an end against Caldy in Round 15.

Gareth Davies’ men have now lost just one of their last 12 games and this 26-21 victory was their third success on the bounce.

A first-half try from Jack Metcalf and two James Robins penalties helped Sale to a 13-12 lead, as Lucas Titherington and Callum Ridgway got on the scoresheet for the visitors.

Robins extended the hosts’ advantage with another penalty, but Caldy replied with tries from brothers JJ and Sam Dickinson.

For the final time this year, @WMuggleton wraps up all the action from tiers three and four in our Derby Day Christmas special.

Metcalf did grab his second two minutes from time, but it proved to be just a consolation as Caldy’s superb return to National One continues.

Cambridge also completed a very impressive first half of the season with a victory as they emerged narrow 24-19 winners against Bishop’s Stortford.

The Blood and Sand, who are now up to fifth place in the table, were level with their hosts at the break after a penalty try and Ben Brownlie’s effort were matched by scores from Will Roberts and Chris Smith.

The only other fixture in National One came in Somerset as Taunton Titans claimed a 35-25 victory over Plymouth Albion in an entertaining contest.

Aron Struminksi, Lewis Webb and Toby East went over for the home side before Isaac Dalton and Jack Walsh also crossed.

Albion were never out of this enthralling battle, but the visitors left Veritas Park empty-handed.

The new league leaders led 19-5 thanks to tries from Will Hall, Reece Dean and Mike Adlard, whilst the I’s could only muster up a Sam Wilson score in the first period.

The hosts then mounted a fightback as Lewis Minikin converted Josh Britton’s try before slotting two penalties to set up an intriguing last 10 minutes.

However, it was the boot of Simon Humberstone which sealed the victory for Hull as Gary Pearce’s side move one point clear at the summit.

Stourbridge missed an opportunity to keep the pressure on Hull as they slipped to a 24-19 defeat against Luctonians in a fiery contest at Mortimer Park.

Charlie Grimes and Rob Bengry went over for the hosts in the first half, either side of Jack Lea’s try.

However, tempers boiled over after the break as following a scuffle between both sets of players, Sam Jones and Matt Perks were shown red-cards with Grimes and Stef Thorp receiving yellows.

Lea was then sent to the sin-bin, which was compounded by Luctonians being awarded a penalty try.

Mark Harrison did respond for Stourbridge, but an Owen Randell penalty made it 24-14 to the home side.

A big win for @Luctonians in the derby game against @StourbridgeRFC at Mortimer Park. Dave Thomas has a few thoughts on Lucs' performance. https://t.co/JyCXd33ZEL

Lea was able to grab his second for the visitors to earn a losing bonus point and with Neil Mitchell’s side taking on Hull on January 8th, it does provide the Midlands club with an immediate chance to hit back in the title race after the festive break.

Fylde continued their excellent home form in Round 15 with a bonus-point 40-10 win over Chester.

The hosts made a scintillating start, Tom Grimes scoring with barely a minute on the clock before the winger completed his hat-trick in the first half.

Scott Rawlings strolled over to stretch Fylde’s lead and then Ben Gregory helped himself to a score as Alex Loney and Chris Briers’ men continued to be rampant.

Harry Wilkinson got one back for Chester, but Tom Carleton and Fylde had the final say as the Lancashire club concluded 2021 with another triumph at Woodlands.

Elsewhere in the division, Blaydon picked up just their second win of the campaign as they beat North East counterparts Tynedale 19-14 to move off the foot of the table.

Redruth made it three wins on the spin to move to the top of National Two South after beating Barnstaple 19-3 at Pottington Road.

After losing to Worthing Raiders at the end of November, Nigel Hambly’s side have responded by stringing together three straight victories to keep their promotion bid on track.

Richard Brown grabbed a brace for the away side, while Will Trewin also crossed in the first half.

Jake Murphy landed Barnstaple’s only points of the afternoon as the Chiefs fell to a seventh defeat on the trot.

The Reds’ lead at the summit stands at two points after Clifton fought off a spirited Dings Crusaders side to claim a sixth win in a row with a 29-23 victory.

Dings were actually 20-15 up at half-time after Olly Bilton, Ashley Challenger, Jake Holcombe and Tom Hargan all charged over to score.

After soaking up more pressure from the hosts, Clifton were able to nudge themselves in front as Joe Owen added to first-half scores from Brad Talbot and Finlay Sharp.

The Lavender and Blacks then ultimately took the game away from Dings as Harry Bate collected their fourth try of the afternoon before Tom Wilstead’s penalty sealed a bonus point for the home side.

Henley Hawks are now eight points off the top of National Two South after a 17-17 draw against Barnes, but this fixture will be remembered for its Christmas spirit.

The Hawks could have snatched the win right at the death when they were awarded a penalty after Barnes’ Jasper Cameron was pinged for not rolling away from the tackle.

However, the flanker had actually been knocked unconscious after making the tackle and was unable to move away so rather than Henley opting for the three points, they kicked the ball out of play as the sides shared the spoils.

The visitors went 5-0 up thanks to Rhyan Scott-Young’s try, but Barnes responded through Alex March and the quick thinking of Josh Davies.

The game was level at the break following Will Crow’s effort and the next score in this contest didn’t come until the 68th minute when Barnes’ Pete Weightman touched down.

The Hawks hit back when Samson Adejimi powered over and even though Nigel Dudding’s side had the opportunity to seal the win, an unbelievable show of sportsmanship shone through in the capital.