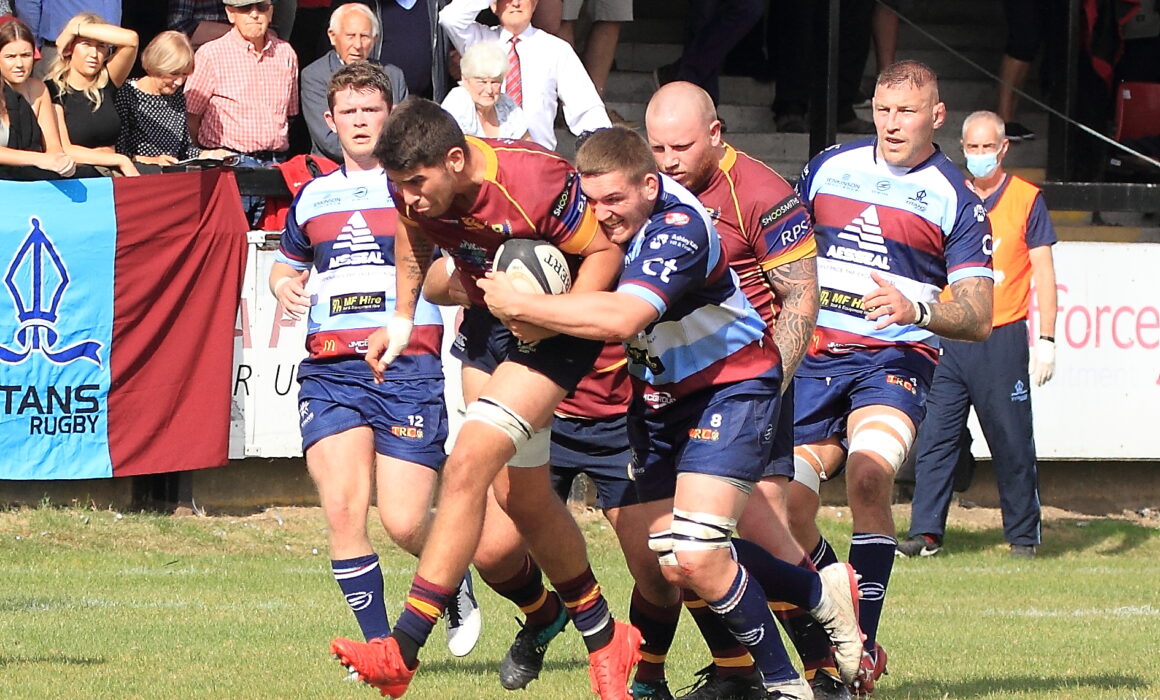 Rosslyn Park strengthened their position at the top of National One after brushing aside Taunton Titans in a 68-21 victory.

Taunton managed to get on the board through Matt Johnson and Jack Walsh, but the second period was dominated by the league leaders.

Hugo Ellis, Marfo, Charles Piper (2) and Henry Robinson added further tries for the hosts, with Charlie Wright scoring a consolation for the Titans.

Caldy are now Park’s nearest challengers after Gareth Davies’ side continued their sensational season as they beat Birmingham Moseley 15-11.

The Wirral outfit leapfrogged Cinderford into second place and they led this contest 10-6 at the break after Adam Aigbokhae’s try and five points from the boot of Ben Jones.

Elliot Bale had nudged over two penalties for Moseley and Tom Benjamin’s try then put the Midlands side in front on 47 minutes.

Incredible away win for Caldy against a very strong Birmingham squad, top marks for the Ravers !!!!!@CaldyRFC pic.twitter.com/53PdSqEn32

But a missed conversion and penalty by the home side opened the door for Caldy to clinch the win and with 10 minutes to go, Sam Dickinson went over.

Caldy are eight points behind Rosslyn Park, but they now have a two-point gap between themselves and the rest of the chasing pack in National One.

From the promotion race to the scrap at the wrong end of the table where Bishop’s Stortford battled to a 12-7 victory over Leeds Tykes to move out of the bottom three.

The men from Silver Leys held a 7-0 lead at the break, Will Roberts going over for a converted score and this cagey affair continued into the second half.

Cole Potts’ effort just short of the hour levelled things up, but the home side would ultimately come up with the decisive score as Josh Stannard crossed the whitewash to seal a potentially crucial win for Stortford.

This victory meant Plymouth Albion dropped into the danger zone after they were soundly beaten 41-27 by Rams RFC, who had Jak Rossiter sent off on 18 minutes.

Back towards the summit, and Sale FC are up to third after crushing Tonbridge Juddians 66-10 – with Andrew Hughes grabbing a hat-trick for the North West outfit – whilst Cinderford’s promotion ambitions were dented further as they were beaten 31-24 by old foes Chinnor at Dockham Road.

Hull made it seven wins on the bounce in National Two North as the table-toppers ran in five tries to beat Sheffield Tigers 33-10 at Dore Moor.

Gary Pearce’s side led 19-10 at the break thanks to tries from Duell Trueman, Keane Naylor and Mike Jobling, whilst Rob Davidson dotted down for The Tigers.

However, the league leaders stretched their advantage when Ben Boothman crossed eight minutes after half-time and the victory was wrapped up on 75 minutes as Reece Dean scooted over.

Hull hold a five-point cushion at the summit over second-placed Sedgley Park, who overcame a strong challenge from Wharfedale to snatch a 29-25 win.

Matt Gallagher’s late try clinched the victory for Sedge after Tom Davidson had thought he’d won it for Dale with a penalty four minutes from time.

The visitors led 14-12 at the interval following tries from Elliot Stockton and Davidson whilst Sedge’s scores came via Jamie Harrison and Danny Openshaw.

Gallagher grabbed his first shortly after the break to put Sedge in front but back came Wharfedale with their third try of the afternoon.

Both sides then exchanged penalties before another three points from Davidson looked to have given the Greens the victory only for Sedge to stun their visitors in the dying embers of this contest.

Fylde have crept up to third in the National Two North standings after they comfortably beat Huddersfield 38-5 at Woodlands.

The Lancashire club have now picked up four wins from their last five games and were never behind in this contest once David Fairbrother had opened the scoring.

Harlan Corrie and the prolific Tom Grimes both went over before Huddersfield got themselves on the board through Nick Sharpe, but that was as good as it got for the visitors.

The home side then ran in three more tries in 11 minutes as Henry Hadfield, Joe Bedlow and Matt Garrod all crossed to seal Fylde’s latest success.

Rotherham Titans’ promotion hopes suffered a blip in Round 17 as they saw a 10-point lead evaporate against Bournville as the Midlands outfit rescued a 17-17 draw in the final quarter at Avery Fields.

The Yorkshire club are now eight points off the top with two games in hand whilst Stourbridge injected some new life into their own title bid after a dominant 32-17 win over Chester.

Elsewhere, Nathan Hill’s late try and Lewis Minikin’s conversion saw Hull Ionians clinch a dramatic 24-23 triumph against Loughborough Students whilst Luctonians made it four home victories on the spin after they beat Tynedale 32-14 and Harrogate defeated Blaydon 29-12 to seal their first win in just over two months.

Clifton continue to march on in National Two South as they beat Barnes 50-26 in an eight-try demolition.

The hosts were reduced to 14-men when George Dean was sent off on the stroke of half-time and Barnes’ indiscipline throughout the afternoon didn’t help their cause against the league leaders.

Flanker Harry Bate dotted down just before the interval, with Howman, Ascherl and replacement Aaron Thompson also going over for the table toppers.

Barnes did manage to earn a four-try bonus point of their own with Paul O’Dell, Matt Branfield, Peter Weightman and Cameron Leigh touching down, but this defeat marked the end of their six-match unbeaten run.

Esher are still breathing down the necks of Clifton after they battled to a 27-14 win over a spirited Barnstaple outfit.

Finlay McBrearty, Lorcan Dow and Dan Rowland all scored first-half tries for the Eees with Hugh Sloan crossing on 75 minutes for the bonus point.

📺 The National League Rugby Review Show: Round 17@WMuggleton is at @HenleyHawks to bring you the best tries and biggest moments from the weekend!

After only scoring three tries in their previous four matches, Barnstaple were able to improve on that statistic as Johnathon Carter and Will Topps went over in this contest but the home side could do nothing to prevent Esher from securing a ninth win on the bounce.

And in The National League Rugby Review Show‘s key game of the weekend, Redruth and Henley Hawks played out a 21-21 draw at Dry Leas as both sides continue to target promotion.

A penalty try on 62 minutes was enough for the Hawks to tie their second game of the campaign, but the result for either team might not be ideal with their title rivals all securing victories in Round 17.

After Redruth had fought back from 14-0 down, Henley’s pressure was eventually rewarded but both clubs couldn’t find the cutting edge to snatch the win.

A brace from Alex Harmes had put the hosts ahead before Richard Brown crossed twice and Luke Hattam surged through to score on 43 minutes for The Reds.

The result leaves Redruth (3rd) five points off the top with a game in hand which, coincidentally, is against fifth-placed Henley in three weeks time.

Worthing Raiders were able to profit from the stalemate in Oxfordshire as Jerome Rudder scored a hat-trick in a 33-19 win against Canterbury whilst sixth-placed Leicester Lions beat Westcliff 49-12.

It was heartbreak for Old Albanian (7th) as Ben Pointon’s late converted try saw Hinckley – who had Josh Smith sent off seven minutes from time – seal a dramatic 28-26 victory whilst Guernsey Raiders defeated Dings Crusaders 31-17 and Bury St Edmunds overcame Rochford Hundred 28-14 in a feisty affair at The Rugby Park.