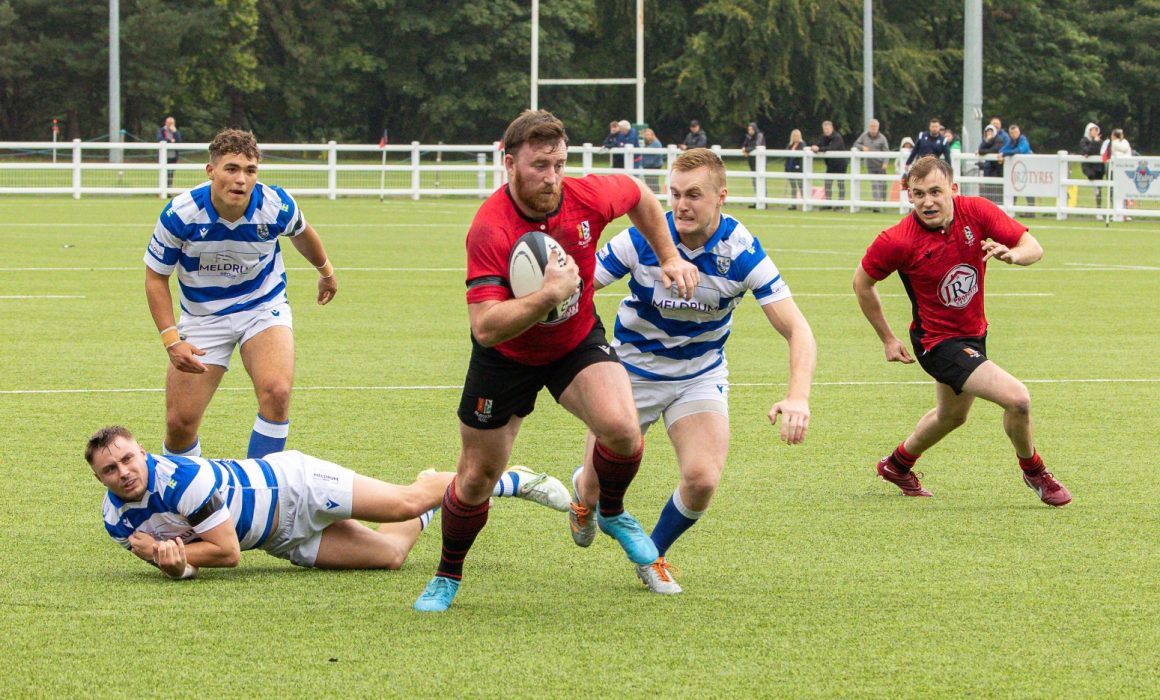 Teams at the wrong end of their respective divisions picked up welcome and valuable victories in Round Eight while clubs at the top highlighted their credentials once again. (Photo Credit: John and Barbara Austin)

Rosslyn Park missed a last-minute penalty as Cambridge clung on to a 24-22 win at The Rock to move up to second in the table.

The scoreboard was dominated by the Blood and Sand in the first half as Joe Tarrant and Ben Brownlie crossed for Cambridge.

Billy Walker’s try on 51 minutes stretched the lead for the visitors but Rosslyn Park roared back into the contest with a quick-fire double from full-back Henry Robinson.

Scott Lloyd’s three-pointer for Cambridge made it 24-12 but scores from Benji Marfo and Charles Piper cut the deficit to just two points.

Piper’s unconverted try came four minutes from time and Park had the chance to steal it at the death but their penalty attempt was off target meaning they slipped to back-to-back defeats against promotion rivals.

The victory for Cambridge leaves them four points off the top as league leaders Rams RFC made it eight successive bonus-point wins after they beat Birmingham Moseley 50-25 at Old Bath Road.

Henry Bird and Jak Rossiter both scored twice in their latest triumph while Sale FC (4th) defeated Chinnor 37-18 away from home and fifth-placed Cinderford departed Esher with a 42-25 success.

Esher remain winless in National One as do bottom-of-the-table Hull who were beaten 38-28 by Taunton Titans. Charlie Wright and Francisco Diaz Dart grabbed two tries each to lift Tony Yapp’s troops out of the bottom three while Darlington Mowden Park created some breathing space between themselves and the relegation zone with an important 29-20 victory over Leeds Tykes in front of a record crowd of 2,279 at The Darlington Arena.

Elsewhere, Bishop’s Stortford recorded their third win in a row as they got the better of Plymouth Albion 31-19 at Silver Leys.

Blaydon potentially kick-started their 2022-23 campaign in Round Eight after beating Sheffield 32-19 at Crowtrees.

The North East outfit had lost all seven of their fixtures heading into the weekend, but their first success of the season could be the platform they need to move out of the bottom three.

Darren Fearn’s try after six minutes set Blaydon on their way and they led 19-12 at the break thanks to tries from Alex Charlton and Ethan Clarke, while Robert Fawdry and Matt Adcock replied for Sheffield.

The men from Yorkshire closed the gap just three minutes after the restart as Christian Hooper darted over but that was as good as it got for the away side as two Zach Thompson penalties – either side of Charlton’s second score – sealed the win.

Blaydon are now just two points from safety after Preston Grasshoppers lost 29-13 to Chester while Huddersfield and Harrogate remain in the drop zone after falling to defeats against Rotherham Titans (27-3) and Otley (6-16) respectively.

At the top, Fylde maintained their 100 per cent record as they cruised to their eighth consecutive bonus-point victory against Tynedale.

Full-back Tom Carleton scored twice in the 43-10 triumph but Sedgley Park (2nd) still have the table-toppers in their sights as they made it eight wins from eight by beating Wharfedale 15-6 at The Avenue. The Tigers are four points behind Fylde and the leading pair take on one another in Round Nine at Park Lane.

Meanwhile, Lewis Minikin was once again the star man for Hull Ionians as his individual haul of 19 points helped his side to a 36-16 win over Sheffield Tigers.

Blackheath have moved back to the summit of National Two East as they earned a 15-6 win over Henley Hawks at Dry Leas.

The unpredictable nature of this division continued in Round Eight but it is ‘Club’ who now hold top spot again as scores from Tom Baldwin and Jake Lloyd helped them to victory.

Dorking – who started the afternoon in seventh place – are back up to second after a fabulous 36-26 victory away at Old Albanian. Austin Emens scored twice for the Red and Whites who are now two points behind Blackheath while Barnes remain in the bronze medal position despite losing 35-22 to Tonbridge Juddians.

Worthing Raiders saw their five-match unbeaten streak come to a halt as Guernsey Raiders remarkably fought back from 26-3 down to claim a stunning 36-31 win at Footes Lane.

Guernsey’s third home success on the spin leaves them two points clear of the bottom three while Canterbury jumped out of the relegation places following a 31-12 triumph over Rochford Hundred.

The City Men’s victory means Sevenoaks have slipped down to 12th in the standings after they were beaten 29-24 by Bury St Edmunds, Fin McCartney at the double for the Wolfpack.

James Basavaraj, James Knight, George Loose, Frank Scott, Ethan Sikoriski and James Riley all dotted down for the hosts who were also awarded a penalty try, while Westcliff had Oliver Walker sent off seven minutes from time.

The scores were locked at 14-14 heading into the break after tries from Tom Williams and Simon Johnson were matched by Dan Broady and Alex Giltrow but Constant’s first nudged the Lions in front.

Ben Young then landed a penalty for the Midlands side before Constant’s second try completed the win as Clifton failed to add to their tally in the second half.

Leicester Lions are two points clear at the top after Bath loanee Ciaran Donoghue inspired Dings Crusaders to a 48-24 victory against Loughborough Students. The full-back scored 18 points in the win while third-placed Hinckley extended their unbeaten run to six matches with a hard-fought 24-19 success against Hornets.

📺 The National League Rugby Review Show: Round Eight @WMuggleton hosts from @WalshamVikings as he brings you the best of the action from another compelling weekend.

Redruth ended October with their fourth straight victory as they beat Old Redcliffians 26-14 while Exeter University (5th) ran in eight tries in their 50-22 triumph over Newport (Salop).

Ben Link was at the double for Luctonians in their 36-19 win against Stourbridge and Barnstaple jumped out of the bottom three following a 37-14 away success at Bournville.

The Chiefs lost to Old Redcliffians in Round Seven but bounced back in the Midlands thanks to tries from Bryn-Lee Jago, Brendan Darley, Dylan Gosling and Tyler Gordon-Oke.

Barnstaple are now a point clear of the drop zone while Bournville, who had Callum Thompson sent off with nine minutes remaining in this contest, are still searching for their first victory of the campaign.