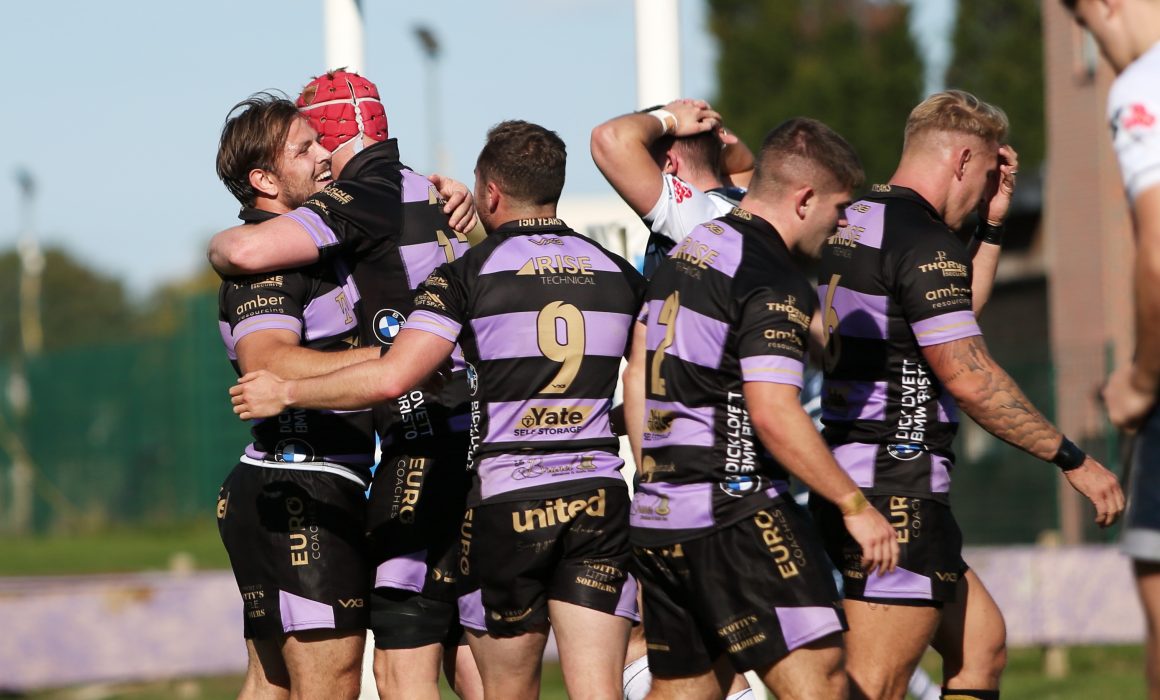 A September which saw a cluster of teams go four from four is now in the past as pacesetters across National One and Two collide on an intriguing weekend. (Photo Credit: Ian Clark)

Sale FC’s tweet following their recent victory over Taunton Titans spoke volumes; ‘We keep building the momentum.’ The North West outfit may have had a dream start to the season collecting four wins on the spin, but they’ve had to graft extremely hard in September to maintain their 100 per cent record.

In a way, that can be a positive for Jonathan Keep and his side because it illustrates mental fortitude as they continue piecing together a title bid. But those possible promotion ambitions will be put under the microscope in Round Five when they travel to a Cambridge outfit that also concluded the opening month of the campaign with maximum points.

The Blood and Sand had a really impressive year in 2021-22 and it seems like they have carried their own momentum into this term. Richie Williams’ boys did beat Sale FC 17-14 on their own patch back in January and even in the contest at Heywood Road, the teams were separated by just eight points (with Sale coming out on top) so who will prevail this time around?

The stakes might not be as high when Cinderford go to Taunton Titans, but the Foresters will be keen to keep the leading pack in their vision in Round Five. After losing on the opening day to Rosslyn Park, Paul Morris’ men have won three on the bounce and now they are only four points off the top.

As for Taunton, they have already played the aforementioned Cambridge and Sale FC this term and their performance last time out in the North West will be a source of encouragement for Tony Yapp’s charges as they go in search of their second win of the season this weekend.

In the huddle just above Cinderford are league leaders Rosslyn Park and fresh from being named England Rugby’s Team of the Month for levels three and four, Kieran Power’s men host Bishop’s Stortford this weekend while second-placed Rams RFC will be looking to go five from five when they entertain Darlington Mowden Park.

Also across National One, Plymouth Albion take on an Esher side aiming for their first win of the season at Brickfields, Chinnor face Leeds Tykes in Oxfordshire and Birmingham Moseley are at home against Hull who are still yet to get off the mark.

Graham Steadman was pleased his side showed “character and guts” in defeat last weekend against Fylde, but the Hull Ionians boss admitted the Yorkshire outfit needed to show a bit more “nous” at times. The I’s saw their winning start to the season come to a halt in Round Four as the league leaders headed back to Lancashire with a narrow 34-31 victory.

Hull Ionians will be determined to display more intelligence this weekend when they travel to second-placed Sedgley Park. Like the aforementioned Fylde, The Tigers shut the door on September with a fourth successive win but based on league position alone, welcoming Hull Ionians to Park Lane will be their toughest test to date. These two sides have featured towards the top end of National Two North over the last few years and perhaps this latest instalment could give us an indication of the aspirations of both clubs this term.

Without a victory to their name thus far, both Huddersfield and Harrogate will be desperate to get off the mark at Lockwood Park. The hosts have narrowly lost to Sheffield Tigers, Otley and Chester this term so Gareth Lewis will be hoping his side find themselves on the right side of the scoreline this time around.

Field are currently second from bottom with Harrogate propping up the division, so the home side might fancy their chances of opening their account in Round Five. However, that same sense of opportunity may actually be felt amongst the visitors. Martyn Wood’s men faced all of the current top four in September, but despite a difficult start to the term, internally, the club have seen improvements in performances and they may well be targeting this trip to Huddersfield as the perfect way to clinch their first National League Rugby triumph since January.

Back towards the summit of the division and table-toppers Fylde will be aiming for maximum points once again when they welcome Blaydon to Woodlands while it is third v fourth as Rotherham Titans travel to North Yorkshire to take on Wharfedale.

Elsewhere, Tynedale host an Otley side with a spring in their step, an in-form Chester go to Sheffield Tigers and two promoted sides meet when Sheffield face Preston Grasshoppers.

Blackheath delivered a stunning statement of intent last time out against Canterbury and will be eager to head into the first ‘Rest Week’ of the season by adding a fourth consecutive victory to their name. With the National Two East table as tight as it is, stitching together a positive sequence of results could be key at this early stage of the campaign, especially against sides who are nestled closely behind you in the standings.

Enter Bury St Edmunds who currently occupy fourth place and are just one point adrift of league leaders Blackheath. Granted, ‘Club’ have a game in hand, but Bury were quick to put the wheels back on in Round Four as they reacted to their loss to Tonbridge Juddians by beating Westcliff. However, it certainly wasn’t a stroll in the park for Jacob Ford’s troops, so they will know they’ll have to up their game if they are to leave the capital with a fourth win from their first five fixtures.

As mentioned in this week’s review, just five points separate the league leaders Blackheath and the relegation places in National Two East. Henley Hawks are level on points with ‘Club’ and the second-placed side go to North Walsham on Saturday while Old Albanian (3rd) visit Westcliff.

Four games gone and four wins for second-placed Leicester Lions and Dings Crusaders (3rd) so how both clubs would love to maintain their sparkling records at the beginning of October.

The Lions are seeking a highly impressive 13th straight victory before heading into the ‘Rest Week’ while Dings have actually only lost one of their last 14 games – which includes beating Saturday’s opponents back in March.

On that occasion, the fixture was played at Shaftesbury Park but the Crusaders are heading to the Midlands where Leicester Lions have won their last 16 matches. Records galore at TMDP Park but something has got to give between two of the in-form sides in National League Rugby.

It will be a special afternoon at Station Road on Saturday when Clifton host league leaders Exeter University. This week marked 150 years since the formation of Clifton and a commemorative plaque was unveiled at the King’s Arms on Blackboy Hill to recognise the landmark occasion.

In recent times, the current stars who don the Lavender and Black have been writing their own history with best-ever league finishes and as we enter Round Five, Matt Salter’s side are on the right path again. Three wins from their opening four fixtures leaves them on the coattails of the leading pack and they have also scored the joint-highest amount of points in the division.

Who are they level with in that particular category? Of course, it is league leaders Exeter so the party atmosphere in Bristol should also contain some free-flowing and exciting rugby. The Green and Whites had a September to remember in their debut season in the National Leagues, but a win in the West Country would certainly prove their explosive start isn’t just a flash in the pan.

With the top four all in action against one another, Hinckley (5th) may well be keeping a close eye on proceedings when they take on Loughborough Students in Round Five while Redruth host Newport (Salop) and Luctonians go to Barnstaple.

Elsewhere, Hornets – buoyant after their first win of the campaign last time out – take on bottom-of-the-table Stourbridge and Old Redcliffians host Bournville.