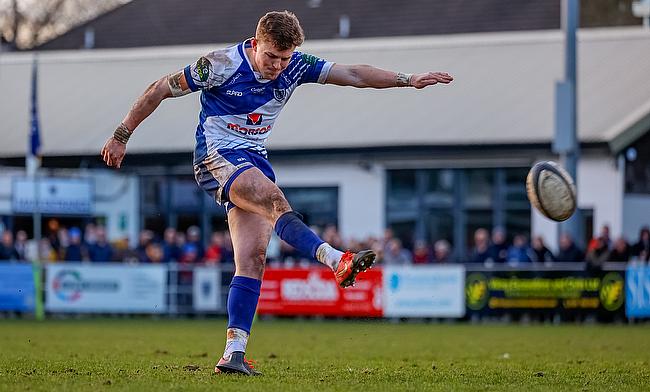 Their seventh triumph on the trot leaves Sale three points behind Caldy, with both teams having played the same number of matches.

Rams were 21-5 up at the interval thanks to scores from Henry Bird and Ollie Cole – plus a penalty try – before Sale roared back in the final 12 minutes.

Joe Carpenter had crossed in the first period for the hosts, but quick-fire tries from Jack Metcalf and Ollie Longmore set up a dramatic finale.

Robins had converted both efforts and was on hand to ping over a last-gasp penalty to seal the win.

We put together a little clip of the celebrations from Saturdays victory.

This is what it’s all about!

James Robins ,who slotted the final kick is sponsored by @handlGroup pic.twitter.com/OZbwCYDjON

There was also a late twist in the tale at Well Hall as Leeds Tykes also snatched a 22-21 win from Blackheath, who once again fell to a narrow defeat.

Tries from Marcus Kershaw and Nathan Morris had helped ‘Club’ into a 15-10 lead, only after Andrew Lawson had opened the scoring for the away side.

Freddie Gabbitass and Patrick Case were on target from the tee in the opening 40, but it was the exemplary kicking display from the latter which helped the Tykes over the line.

The duo swapped penalties before Case landed two of his own to give the Yorkshire outfit  a 19-18 advantage. Jake Hennessey then took over the kicking duties for the home side and nudged over a simple three points with two minutes to go, but Leeds Tykes were to get one more opportunity which the visiting centre didn’t pass up.

The victory for Jon Callard’s men means they are now only four points from safety with a game in hand whilst Blackheath are still very much embroiled in a scrap towards the bottom.

Cambridge’s (4th) run of just one defeat from their last 10 games has kept them involved with the frontrunners in National One as they came from behind to beat Darlington Mowden Park 22-20. The Blood and Sand are now 10 points behind Caldy with a game in hand.

Elsewhere, Chinnor arrested a five-match winless run by beating bottom of the table Tonbridge Juddians 36-10, whilst tries from Ethan Priest and Dan Lewis helped Birmingham Moseley to a 22-20 comeback win over Taunton Titans.

Adlard sealed the win after latching on to Reece Dean’s pinpoint kick even though the hosts had been reduced to 14-men when Ben Bootham received a 70th-minute yellow card.

Hull full-back Dean opened the scoring before the league leaders were awarded a penalty try as the first half ended 12-0.

Simon Humberstone landed a penalty to keep the home side in control, but Rotherham sparked into life as three points from Matt Minogue, a score from Tomos Richardson and a penalty try saw the Titans flip this contest on its head in 20 second half minutes.

📺 The National League Rugby Review Show | Round 23 @joeharvey34 hosts this week's show as we look back at another thrilling weekend, including our Key Game between @hullrugbyunion and Rotherham Titans.

However, Hull were not to be denied a 13th straight win and Dean’s magic and Adlard’s finish means the table-toppers are now 11 points clear at the summit.

At one point, it looked as though that margin would be greater when second-placed Sedgley Park found themselves 13-0 down against Luctonians, but tries from Matt Gallagher and Jamie Harrison, plus the boot of Steve Collins, saw the Tigers turn it around in Herefordshire.

It was tries galore for both Fylde and Stourbridge as they racked up 139 points between them on Saturday afternoon. The Lancashire club scored on no less than 13 occasions to beat Blaydon 79-31 -with scrum-half Matt Sturgess helping himself to four tries – whilst Stour secured a 60-27 win over Wharfedale in the Midlands.

Both Hull Ionians (52-5) and Tynedale (53-19) surpassed a half century of points in their victories against Bournville and Huddersfield respectively whilst Chester defeated Harrogate 34-14 at Hare Lane and Sheffield Tigers sealed a 20-12 success over Loughborough Students.

Esher’s two recent results have completely changed the dynamic of the National Two South title race and their latest 41-24 win over rivals Clifton leaves the race for promotion beautifully poised.

Before the game, there was a minute’s silence at Station Road in memory of Sam Polledri, who tragically died last week aged just 24. His family have strong connections with community clubs across Bristol and his former side, Dings Crusaders, also held a minute’s applause ahead of their 31-19 win at Barnstaple.

Jack Bartlett’s early try was cancelled out by Esher’s Jack Lavin (2) and Myles Rawstron-Rudd before Ian Clark and Fergus Donnelly swapped tries in this top-of-the-table battle.

With the score at 28-10 to Esher, it was first blood to Clifton just after half-time with Thomas Wilson going over, but Rawstron-Rudd and Tomasz Pozniak saw Peter Winterbottom’s side hold a 21-point lead heading into the final quarter.

Henry Harper did respond for Clifton, but Sam Morley’s penalty made sure Esher backed up their excellent victory over fellow promotion candidates Redruth with another potentially crucial triumph.

Here are your Round 23 results throughout National 2 South this weekend! #Nat2S pic.twitter.com/gaLpfZwqCB

The Eees are now two points behind the aforementioned Redruth who returned to top spot after beating Guernsey Raiders 54-17 at the Recreation Ground.

Esher do have a game in hand over Nigel Hambly’s side, but that fixture – which takes place on March 19th – is against third-placed Worthing Raiders who stretched their winning streak to nine matches after edging past Barnes 26-25.

The Sussex outfit are level on points with Esher whilst Clifton’s loss leaves them in fourth and three points off the summit.

On a special and emotional day at Dry Leas, Henley clinched a 12-10 win over Canterbury in a game which was played in tribute to former Hawks second-row David Hyde, who sadly passed away at the beginning of this season.

Elsewhere, Leicester Lions full-back Alex Wilcockson scored four of their five tries as the Midlands club beat Rochford Hundred 33-17 and Bury St Edmunds came away from Hinckley with a 48-28 win whilst Westcliff picked up just their second success of the season as Greg Bannister’s boot guided them to an 18-14 victory against Old Albanian.