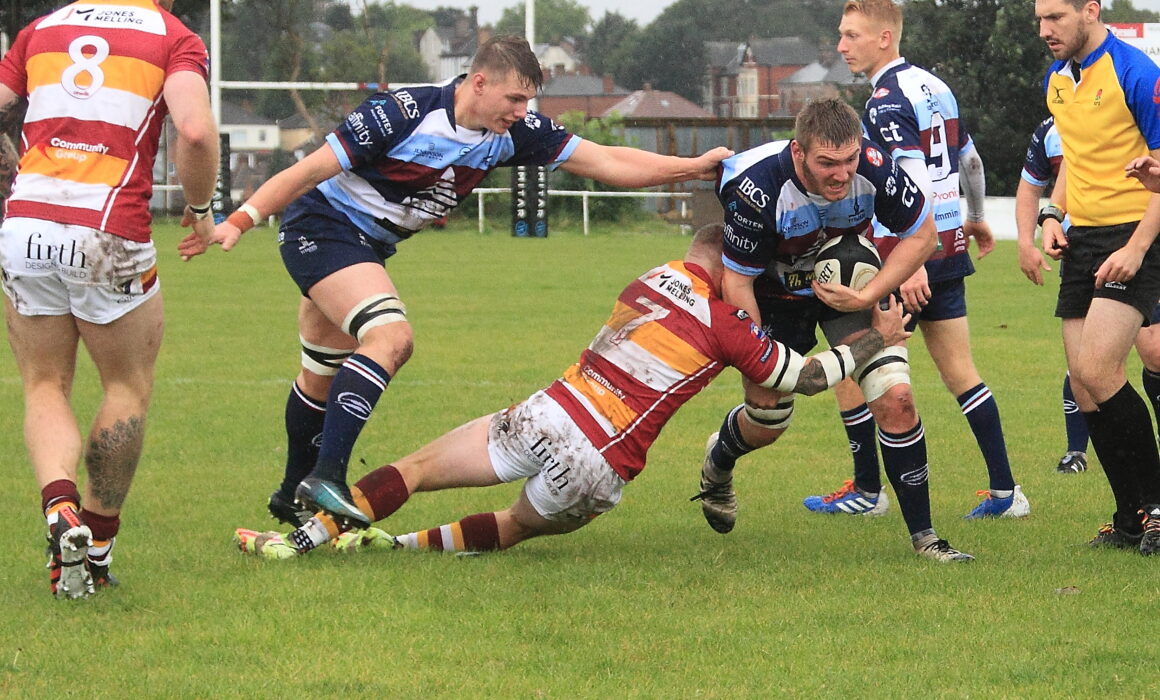 Fylde’s meeting with Rotherham Titans is expected to change the direction of the promotion battle in National Two North whilst fixtures between the top and bottom clubs in National One sets up an interesting weekend. Photo Credit: (Gareth Siddons)

Rosslyn Park have won nine of their last 10 matches in National One and it has left Kieran Power’s men in command of the title race. You’d be brave man or women to bet against the league leaders extending that run in Round 19 and given they are already nine points clear with a game in hand, another victory would keep them firmly in the box seat.

There is still a long way to go before Park ‘get over the line’ but out to stop the table-toppers this weekend will be Bishop’s Stortford. Tom Coleman’s side are concluding January in good spirits after collecting seven points from their last two matches. Last Saturday’s superb fightback against Taunton Titans means Stortford are now four points clear of the bottom three, but they will need to be fully focused at Silver Leys if they are to acquire a positive result against the promotion favourites.

Second-placed Caldy continue to dispel any talk of them potentially ‘running out of steam’ this season as Gareth Davies’ men maintained their wonderful form last time out. They have now lost only one of their last 15 games and their mentality right now might be ‘no room for error’ if they are serious about challenging for a promotion spot.

This weekend they visit Darlington Mowden Park who ran Caldy pretty close in their first league meeting back in October. The North East club will think the fixture list hasn’t been too kind to them after they faced league leaders Rosslyn Park in Round 18, but perhaps more pressing for DMP is where they currently are in the standings. Garry Law’s men are sitting preciously above the bottom three – level on points with Plymouth Albion and Leeds Tykes who are directly below them – so if they were able to halt the Caldy juggernaut, it could prove to be a turning point in their campaign.

The same narrative of a promotion chaser vs a side scrapping towards the bottom applies to Sale FC’s (3rd) visit to Leeds Tykes (14th). After a gritty win over Plymouth Albion last Saturday, the dynamic for Sale remains the same as they are on the coattails of Caldy. Jonathan Keep’s side have recovered from their blip either side of Christmas so they will want to end the month with a hat-trick of victories.

However, Leeds Tykes will be on a high after their dramatic triumph over Rams RFC in Round 18. National One’s Player of the Week, Charlie Venables, landed a late penalty and it means the Yorkshire outfit have actually secured three victories from their last five games. With the news this week that Director of Rugby Phil Davies will leave the Tykes next month to take up a role within World Rugby, his side will be keen to give him the ideal send off by maintaining their recent upturn in form.

Fourth-placed Cinderford need to start mirroring their fellow promotion contenders if they are to remain in contention for a top-two spot. Paul Morris’ men host bottom of the table Tonbridge Juddians in Round 19, aiming to arrest a run of six defeats from their last seven games.

Elsewhere, Cambridge will be looking to stretch their unbeaten streak to six matches when they visit Birmingham Moseley whilst Chinnor, desperate for some consistency, travel to Blackheath and Rams RFC welcome Taunton Titans to Old Bath Road.

Over the next month, National Two North leaders Hull have a run of fixtures which they will want to capitalise on. Between now and their potentially huge clash with Rotherham Titans on March 5th, Gary Pearce’s charges only face one side [Loughborough Students] who are currently in the top half of the table.

On paper, Hull will be favourites to extend their winning run across the course of the next five weeks, but as they will know, they cannot afford to become complacent if they are to create history in April. They will certainly not be underestimating any opponent they play, starting with Tynedale this weekend. The North East outfit gave Hull a run for their money back October and they also showed their spirit to earn a bonus-point against title challengers Stourbridge last week, but ahead of their trip to Chanterlands Avenue, Tyne are yet to pick up an away victory this term. Can they defy the odds?

The fixture of the weekend – and The National League Rugby Review Show’s Key Game – comes from Fylde (3rd) as they host unbeaten Rotherham Titans at Woodlands. The home side have won five of their last six matches and if they were to add another success to that sequence, then it would only raise the Lancashire club’s hopes in regards to the promotion race.

There is something brewing in #Nat2n ??

The title race is ready for its latest chapter and The National League Rugby Review Show has you covered in Round 19!

You can watch this clash + the rest of the action in our changed slot of Monday evening!

Chris Briers and Alex Loney’s side have not been beaten on their own turf this season, but that record will be put to the test on Saturday. It can be argued that Rotherham are in control of the title battle despite sitting fourth in the table. Adam Byron’s side are eight points off the top with two games in hand so how their campaign pans out will be driven by their own results. It might be too early to say, but the outcome at Woodlands will have a serious impact on the fight for top spot.

Fifth-placed Stourbridge will be keeping a beady eye on proceedings when they face Loughborough Students in Round 19. Last weekend’s blistering opening 40 minutes from Neil Mitchell’s side against Tynedale helped them to successive victories for the first time since November, but more importantly, it still leaves them in the title race conversation.

As for Loughborough, they will take the trip across Birmingham in better spirits after halting a run of five straight defeats last time out. A narrow victory against Luctonians was most welcome for Scott Sneddon’s men and now the Students will be hoping to build on that triumph in order to breathe some new life into their campaign.

Elsewhere this weekend, Hull Ionians welcome Harrogate to Brantingham Park and Chester travel to Sheffield Tigers. Also in National Two North, Luctonians are up against Huddersfield, Wharfedale go to Blaydon whilst Sedgley Park’s trip to Bournville has been postponed due to Covid-19 concerns.

Matt Salter praised his team’s attitude after Clifton clinched a ninth straight victory in National Two South last weekend. The Lavender and Blacks fought their way past Henley Hawks to extend their record-winning streak at this level, and they enter the final weekend in January still in possession of top spot.

Speaking to the club website, Salter also stressed the need to maintain their concentration in this relentless title battle and Clifton will want to harness that message when they visit Hinckley this weekend. Last week, the Hornets once again had their plans disrupted on the day of the game but Director of Rugby Scott Hamilton admitted they made too many mistakes against Redruth and were punished. The Midlands club will be aware they will have to wise up quickly if they are to get anything from this meeting with another promotion contender.

The fact second-placed Esher were able to claim a bonus point in their win over Leicester Lions last weekend and Clifton weren’t able to follow suit means an already gripping race for pole position has become even tighter. Their 10th victory on the spin leaves them level at the summit of National Two South and there may well be a sense of eager anticipation amongst the Eees faithful.

Esher have two games in hand over Clifton but they have to face all of their title rivals between now and the middle of March, so there is still a lot of work to be done for Peter Winterbottom’s men. Their pursuit of a place back in National One continues when they visit Barnes on Saturday, who complete January by facing another side in the top three. After starting the year by superbly beating Redruth, they were well beaten by Clifton in their last home outing so how will Joe Gray’s side fare this time around?

Can Redruth keep up with the unforgiving pace which both Clifton and Esher are setting? A solid win over Hinckley means they are four points off the top, but the next two weeks are critical for the Reds if they are to strengthen their promotion aspirations.

Nigel Hambly’s side do have a game in hand over Clifton, which they will fulfil against Henley on February 5th, and if they were to win that as well as this weekend’s meeting with Old Albanian, Redruth would go above Clifton in the league standings. That won’t be easy though against an OA’s itching for a reaction. Just one victory from their last four games has seen them fall away from the frontrunners, but they will be keen to close out January by returning to winning ways.

Worthing Raiders (4th) were the most recent side to beat Old Albanian so it doesn’t get much easier for Dan George’s men in Round 19. In terms of Worthing themselves, that victory has kept them in the promotion picture and the Sussex outfit take on Rochford Hundred on Saturday.

Elsewhere, Henley Hawks will want to avoid a third winless week in a row when they entertain Westcliff whilst Bury St Edmunds travel to Barnstaple and Dings Crusaders face Canterbury.

Leicester Lions’ meeting with Guernsey Raiders has been postponed due to Covid-19 concerns.