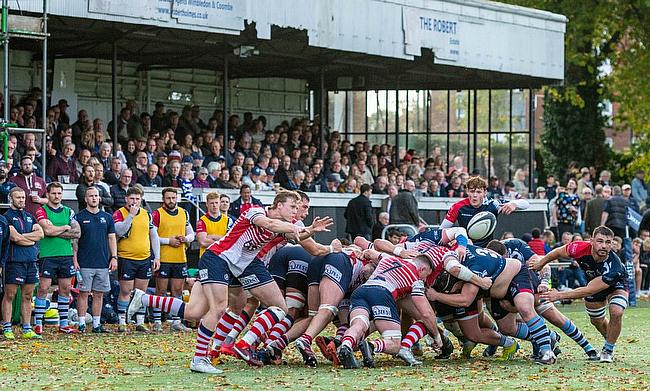 Chinnor and Sevenoaks both lifted themselves out of the bottom three in their respective divisions, Fylde maintained their pristine record while the race for top spot in National Two East and West continues to thrill. Photo Credit: (Tim Pitfield)

Rams RFC secured their seventh successive bonus-point win as they beat promotion rivals Rosslyn Park 29-21 to maintain their 100 per cent record this term.

A penalty try after just three minutes provided the perfect start for Park but the National One league leaders clicked into gear and began to take the game away from their hosts.

Jak Rossiter’s try was swiftly followed by Charles Robson’s effort to give Rams a 12-7 half-time advantage before man of the match James McRae scored a superb try to stretch their lead two minutes after the restart.

A penalty from Alex Seers and a converted Andrew Humberstone try confirmed the bonus-point for Seb Reynolds’ side with a quarter of the game still to go.

Park rallied late on as replacement Jake Buckingham touched down twice, but the damage had been done as Rams moved three points clear at the top.

Cambridge were able to leapfrog Rosslyn Park into second spot as the Blood and Sand capitalised on Cinderford’s indiscipline to record a 40-29 victory.

Richie Williams’ side were eight points down heading into the final 10 minutes but Matt Lane and Mike Austin were both sent to the sin-bin which allowed the hosts back into the contest.

Ben Brownlie and Stef James both scored either side of a penalty try to clinch the victory for Cambridge while Sale FC’s own flurry of yellow cards could have cost them against Esher, but the North West outfit were able to secure a 35-21 victory, with hooker Josh Brown claiming a hat-trick.

Jack Oulton and James Salter both scored twice as Plymouth Albion made it three wins on the spin thanks to a 45-5 triumph against bottom-of-the-table Hull, Bishop’s Stortford ended Leeds Tykes’unbeaten run with a 27-13 victory in Yorkshire and fly-half Oliver Allsopp was the star of the show for Birmingham Moseley as his late penalty clinched a dramatic 32-30 success over Darlington Mowden Park.

Elsewhere, Chinnor moved out of the relegation places after coming from behind to defeat Taunton Titans 31-21 in Somerset, with Reece Marshall scoring four tries.

Chinnor’s hooker dotted down on two occasions in the opening 40 to give his side a 12-7 lead but Taunton hit back soon after the interval.

Toby East and Brett Harvey added to Tom Stewart’s first-half effort to turn the tide, but the away side went on to score 19 unanswered points through Josh Pieterse and the prolific Marshall to seal just their second win of the campaign.

A superb individual performance from winger Lewis Workman gave Huddersfield a vital 24-7 win over Blaydon as Gareth Lewis’ side tasted victory for the first time this season.

The Yorkshire outfit began the afternoon at the foot of National Two North but led this contest 17-0 at half-time thanks to a brace from Workman and Tom Hodson’s effort.

Workman completed his hat-trick on 48 minutes and while Owen Chaplin did get Blaydon on the board, it wasn’t enough to trouble Huddersfield as they saw out the rest of the contest.

Field have jumped ahead of Blaydon and Harrogate in the standings after the latter were beaten 16-10 by Sheffield Tigers while Preston Grasshoppers are now the team directly above the drop zone following their 28-15 loss against an Otley side who find themselves in fourth place.

League leaders Fylde recorded their seventh bonus-point triumph in a row as they ran in six tries to beat Wharfedale 43-3 at Woodlands while Sedgley Park remain on their coattails after an impressive 25-17 victory over Rotherham Titans.

Adam Mallinson and Rhys Henderson went over in the first 40 for the second-placed side as they held a 15-12 lead at the break, but Rotherham matched their try count with Gareth Denman and Matt Challinor dotting down.

The Titans then got their noses in front through Jack Taylor but Sedge delivered the final blow of this encounter as Steve Collins’ penalty was added to by Alex Brookes who went over 13 minutes from time.

Also across National Two North, Lewis Minkin once again starred for Hull Ionians as his individual points haul of 16 helped Graham Steadman’s troops defeat Sheffield 26-19 while Chester picked up a third away win on the bounce as they beat Tynedale 21-14.

It is all change once again at the summit of National Two East after Old Albanian were knocked off top spot by Worthing Raiders as they extended their winning run to five matches thanks to a 38-20 success.

The hosts also achieved this feat with 14-men after prop Fraser Bruce was sent off after only 13 minutes in Sussex.

They also received two further yellow cards before half-time but a blistering period either side of the break proved to be the difference.

Samson Adejimi and Dan Lilley put OAs 10-0 up just before the half-hour mark but this seemed to spark Worthing into life as Curtis Barnes, Thomas Bowen and Jack Forrest all delivered scores.

Barnes then completed his hat-trick before Bowen grabbed a second as Worthing moved 38-10 in front and even though Kemp Price and Kaz Henderson cut the gap with 10 minutes still to play, the home side didn’t concede again.

Only one point separates the top five in National Two East (which includes Worthing and Old Albanian) but it is Blackheath who have returned to pole position as Alex Harris and Paul Schroter scored twice in their 48-19 triumph against Guernsey Raiders.

Barnes – who are level on points with Blackheath – are up to second after they beat Rochford Hundred 28-3 and Henley Hawks are tucked in behind in third as they battled to a 38-24 victory against bottom-of-the-table Westcliff.

Dorking – who began the day in the top two – have now dropped to seventh after fly-half Charlie Reed guided Bury St Edmunds to a 17-16 win over the Red and Whites while Hugo Watson scored a hat-trick for Tonbridge Juddians as they comfortably won 45-7 against North Walsham, who had No.8 William Hodgson sent off inside the first two minutes.

Elsewhere, Sevenoaks jumped out of the bottom three following a 26-17 success against Canterbury.

Sixteen points from Ben Adams proved to be the difference as the full-back’s efforts helped his side to their second win of the campaign.

The hosts led 11-3 at the break before Will Young dotted down for Canterbury, but Jonathan Short responded for Sevenoaks. A penalty try for Canterbury made it a one-point game on 66 minutes but a penalty from Adams and Charlie Naismith’s score sealed the win.

Dings Crusaders’ winning start to the season came to an abrupt end as Redruth ran in seven tries to defeat the Bristol outfit 49-19.

Ed Pascoe, Todd Prisk, Mackenzie Oliver and Dean Bonds went over in the first half, with Dings replying via Oliver Bilton and a penalty try.

The hosts led 28-14 at the break and continued to be ruthless in the second half as Jess Tompsett, Jarrard Hayler and Tommy Phillips touched while Lewis Beer scored a consolation try for the Crusaders.

The defeat for Dings means Leicester Lions now top National Two West after hammering Bournville 57-14 in the Midlands. Chester Owen and James Stubbs both scored twice while it was also a straightforward afternoon for Clifton (2nd) who beat Hornets 63-17, with scrum-half Danny Openshaw bagging a hat-trick.

SCB sponsors for todays match made the decision to choose the whole team🔴🔴 pic.twitter.com/MWpdF2jkoe

Hinckley extended their unbeaten run to five matches as they survived a revival from Exeter University to claim a 29-26 victory at Topsham.

Despite a closely-fought contest, the Midlands club never fell behind and the teams shared five tries in the first half. Exeter’s Josh Bailey and Jon Searle had their efforts cancelled out by Alex Salt, Dale Bowyer and Oliver Povoas.

Henry Povoas’ score shortly after the break gave the Hornets some breathing space before Salt’s second opened up a 17-point advantage.

Two tries in four minutes from Tom Tribe and Oscar Gleave set up a tense final 15 minutes but Hinckley held on for the win.

Just four points separate the top six in National Two West and Loughborough Students are now in the shadows of the frontrunners after Tom Smith’s late penalty sealed a 27-24 win over Luctonians. Elsewhere, Newport (Salop) claimed their third win of the season after beating Stourbridge 37-27 on their travels and Jalen Curry’s try nine minutes from time helped Old Redcliffians to a 20-14 victory against Barnstaple.