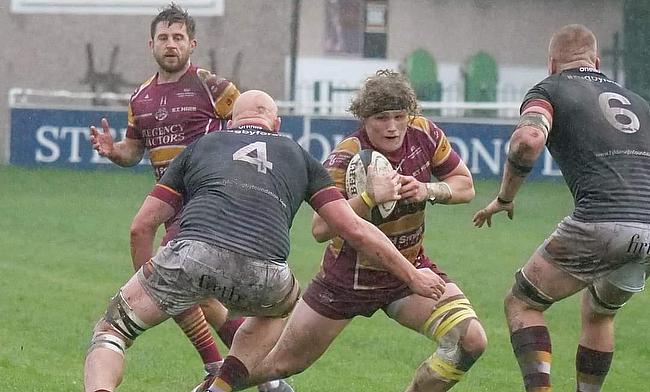 While the weekend went mostly with the form book, Sedgley Park and Clifton halted the momentum of their possible promotion rivals. (Photo Credit: Glenn Hutton)

Bishop’s Stortford sealed a fourth win on the bounce as they defeated Taunton Titans 31-24 in Somerset, with Will Rogers scoring a hat-trick.

His double in the first period gave the visitors a 12-5 lead but Taunton’s Charlie Wright added to Sam Knott’s effort to tie things up.

It was also two tries apiece in the second 40 as Issac Dalton and Jordan Gott dotted down for the hosts while Josh Stannard and Alex Rayment went over for Stortford before Rogers’ third 13 minutes from time ultimately secured the victory.

Tom Coleman’s troops are now up to fifth in the standings but it is still Rams RFC who lead the way as their ninth successive bonus-point win keeps them four points clear at the summit.

Seb Reynolds’ men defeated Leeds Tykes 36-10 – with hooker Max Hayman bagging a brace – while Joe Tarrant starred for second-placed Cambridge as his four tries helped the Blood and Sand to a 38-24 triumph over Esher.

Despite having Dan Birchall sent off just after half-time, Sale FC (3rd) took advantage of two yellow cards shown to Hull to defeat the division’s bottom club 34-7 in the North West while in the Midlands, Rosslyn Park (4th) survived a remarkable revival from Birmingham Moseley to record a 47-36 success, Charlie Walker scoring a hat-trick.

Elsewhere, Nick Smith’s late penalty secured a share of the spoils for Chinnor as they drew 10-10 with Cinderford and Plymouth Albion returned to winning ways as they beat Darlington Mowden Park 36-24.

Sedgley Park knocked Fylde off top spot in National Two North as they ended the Lancashire outfit’s 100 per cent start to the season following a 30-20 win.

Connor James crossed early on but Tom Grimes and Ben Gregory both dotted down for Fylde to give them a slender advantage at the break.

But that 13-10 lead was the last time the away side would be in front as three points from the boot of Steve Collins and a penalty try gave Sedge a seven-point buffer on the hour.

Connor Wilkinson’s score levelled things up but another penalty from Collins and Danny Maher’s try on 77 minutes secured the victory for the Tigers and denied Fylde any points at Park Lane.

It was a good weekend for Rotherham Titans (4th) and Chester (5th) with both picking up solid victories in Round Nine. The Titans beat Sheffield 39-14 while Chester made it six wins from their last seven as Alick Croft’s hat-trick helped them to a 45-19 success against Harrogate.

Despite being shown four yellow cards over the course of the afternoon, Jack Howieson’s side managed to clinch a 34-22 win while a 20-14 victory for Field now leaves them three points from safety.

Blackheath maintained their slot at the summit of National Two East as they thrashed North Walsham 50-3 at Well Hall.

Nick Foster (2), Tom Baldwin, Jack Daly and Lewis Hollidge crossed as the hosts moved into a 31-3 lead at the interval before scores from Brendan McMillian, Tom Ffitch and Tom Stradwick put the icing on the cake for ‘Club’.

HAWKS WIN! Henley score in the corner right at the death to win 30-26 and secure a try bonus point in the process! My days… #GTH pic.twitter.com/yb9L38ehsE

James Shanahan’s men are three points clear at the top after Dorking continued their fine start to life back in the fourth tier with a 17-13 victory over Guernsey Raiders. Third-placed Barnes made it three home wins on the spin after beating Canterbury 37-26 in the capital while Tonbridge Juddians also extended their good, recent form with a 48-13 success against Westcliff.

The jostling for position towards the top of National Two West continued in Round Nine with Clifton’s 34-13 victory over Hinckley one of the standout results of the weekend.

The Hornets were on a six-game unbeaten run and they led 10-8 in this contest at the break thanks to Dale Bowyer’s try and a penalty from Joe Wilson.

Nick Selway had dotted down for Clifton in the first period, and two tries in four minutes from Will Owen and Bradley Talbot put the Lavender and Blacks 10 points ahead.

Another Wilson penalty cut the gap but a second try for Owen and Finlay Sharp’s effort wrapped up the win for the hosts who are now up to fourth in the standings.

Leicester Lions still lead the way but had to work hard to secure their 26-10 victory against Barnstaple. Four yellow cards for the Chiefs – who led 10-0 at one stage – proved to be their undoing as the Midlands club turned the contest around in the second period.

Dings Crusaders have the Lions in their sights as Ciaran Donoughe starred yet again in their 29-24 win over Stourbridge, the full-back scoring two tries and kicking nine points while Redruth picked up their fifth victory in a row as they beat Bournville 36-17.

Elsewhere, Ben Link’s hat-trick helped Luctonians to an impressive 33-3 triumph over Exeter University, 13 tries were scored in Loughborough Students’ 57-30 win against Old Redcliffians and Hornets moved out of the bottom three following a 33-19 success against Newport (Salop).