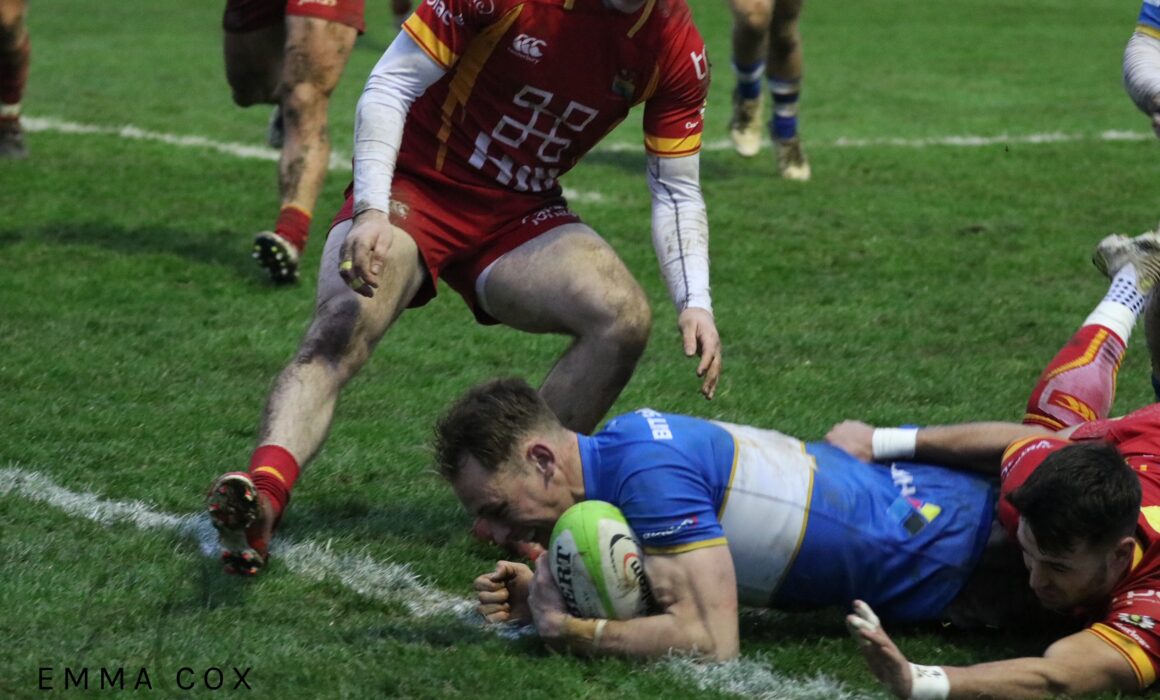 For all of Fylde’s attacking flair this season, their victory over National Two North promotion rivals Rotherham Titans was unpinned by a superb first half defensive display. (Photo Credit: Emma Cox)

Rosslyn Park’s promotion charge was halted in Round 19 as Bishop’s Stortford produced an outstanding performance to beat the league leaders 36-24 at Silver Leys.

Sam Bryan went over to get the hosts going, but Park responded through Henry Spencer.

Benji Marfo then handed the away side the lead with his try, but Joss Linney smashed his way over the line for Stortford just before half-time.

Linney’s second was matched by Charles Piper, but two excellent tries created by debutant Al Orchard and finished by Josh Stannard – either side of Harry Charter’s effort – gave Stortford an unassailable advantage.

Piper’s second try did salvage a bonus-point for the table toppers, whilst this superb win for Stortford has created some breathing space between themselves and the bottom three.

Caldy are now just five points behind Rosslyn Park as they scored six tries in a 40-7 victory against Darlington Mowden Park.

Callum Mackenzie put the hosts in front after 10 minutes, but that was as good as it got for DMP as the visitors ran riot in the North East.

A penalty try was followed by Nathan Rushton going over before Adam Aigbokhae grabbed his first score of the day.

A selection of match shots from Saturday's, 7-40 away win at the Darlington Arena against @MowdenPark!

Please visit the following link for the fully gallery:https://t.co/wMWkM8Pxkm#Ravers pic.twitter.com/ziSBBc6IkP

Oli Hearn, Aigbokhae and Lucas Titherington all crossed to make it a comfortable afternoon for Gareth Davies’ men.

A difficult outing for the home side was compounded by Fred Lockwood receiving a second yellow-card four minutes from time.

The red-card theme continued in Yorkshire, but despite being reduced to 14-men, Sale FC battled to a 17-13 victory over Leeds Tykes.

The North West side were never behind in the contest and opened the scoring through Jack Metcalf.

Charlie Venables slotted two penalties for the hosts before Sale’s Dan Birchall was sent off on 34 minutes.

But the visitors mustered up an ideal response as Jake Barron dotted down in the corner before the break.

Henry Robinson’s well-taken try on 54 minutes brought Leeds Tykes back into the match, but a late penalty from James Robins confirmed a third straight success for Sale FC.

There were also victories for Cinderford (4th) and Cambridge (5th) in Round 19. It was a welcome win for the Foresters who defeated Tonbridge Juddians 41-5 at Dockham Road whilst the Blood and Sand came away from Birmingham Moseley with a 21-10 triumph.

Elsewhere, Tom Vooght scored his 50th try for Rams RFC as they crossed on seven occasions in a 43-19 win against Taunton Titans whilst Jake Lloyd and Jake Hennessey starred for Blackheath in their 25-15 victory over Chinnor.

Hull remain in control of the National Two North title race after a thumping 60-10 win over Tynedale at Chanterlands Avenue.

After increasing their gap at the top last weekend, Will Hall got the ball rolling for Gary Pearce’s side in Yorkshire.

Fylde secured their ninth home win on the spin as they ended Rotherham Titans’ unbeaten record in a 21-17 triumph.

A physical first-half was underpinned by some resolute defending from the home side and their endeavour to shut out the Titans was rewarded with two Greg Smith penalties in the opening period.

Harry Dunne’s try for Rotherham ignited this contest at the start of the second half, but Fylde roared back with excellent scores from Matt Strugess and Henry Hadfield to move 21-5 ahead.

Who is ready for some Monday Night Rugby? 📺

The National League Rugby Review is in its new home for the next 7 weeks so subscribe now to watch the action from Round 19!

The Titans continued to battle and Callum Bustin’s try 11 minutes from time kept them in with a fighting chance.

However, Fylde remained strong in defence and despite Bustin going over for a second, the Lancashire club held on to what could be a crucial win in this fascinating title battle.

Stourbridge have lifted themselves to third in the table after they hammered Loughborough Students 46-24 in this all-Midlands affair.

The excellent Tomas Bacon, Dan Rundle and Immanuel Feyi-Waboso notched first-half tries for Stour whilst Michael Penn also went over to give the hosts a 36-12 lead at the interval.

Tobi Wilson’s try was bookend by Rundle’s second as the hosts completed their eight-try rout after the break.

Loughborough did end the afternoon with a bonus-point thanks to Alex Wainwright’s score which added to earlier efforts from Fergus Dick, Sam Kildunne and Tom Smith.

It certainly wasn’t a dry January for Hull Ionians who ended the month unbeaten after defeating Harrogate 47-14 at Brantingham Park whilst Mark Ireland’s penalty was enough for Sheffield Tigers to record a 10-7 win over Chester.

Elsewhere, Wharfedale ran in six tries to beat Blaydon 38-24 and Huddersfield secured only their second away win of the campaign after seeing off Luctonians 22-17 at Moritmer Park.

Clifton made it 10 victories in a row in National Two South after a hard-fought 28-15 win over Hinckley.

Matt Salter’s side were 7-0 up inside 15 minutes when prop Ricardo Cano dotted down, before Alex Howman doubled the Lavender and Blacks lead.

A try from Mitch Lamb brought Hinckley back into the encounter, but Clifton entered the sheds with another score to their name, this time via Alex Forrester.

The Midlands club made a strong start to the second period with both Dale Bowyer and Toby Baldwin going over but Tom Wilson’s try 11 minutes from time secured yet another victory for the league leaders.

Tom Mitchell’s second-half try proved to be enough as Esher extended their run to 11 straight wins after battling past Barnes.

The full-back’s score with 13 minutes left saw the Eees secure a victory in the capital and now they sit one point behind league leaders Clifton.

Dan Rowland’s effort was the only try of the first period and Barnes looked to be heading into half-time with the advantage after two Rob Kirby penalties.

After that fantastic win away today, who have the #LavenderAndBlack got at home next?

Only @redruth in 3rd place!

However his opposite number, Sam Morley, nudged over a three-pointer for an 8-6 lead before Mitchell came up the key moment as he finished smartly in the corner.

Redruth are still keeping the top two in their sights as they held off a spirited fightback from Old Albanian to clinch a 28-21 win.

Two penalties from Craig Williams gave the Reds a platform before Richard Brown and Steele Barker both crossed.

Nick Defeo hit back for OA’s, but it was first blood to Nigel Hambly’ side after the break as Brown collected his second score of the afternoon.

The hosts then mounted a comeback with Alex Noot and Ben Charnock going over in a five-minute window, but the visitors held on to the victory.

Worthing Raiders and Henley Hawks made sure the top five all won in National Two South. The Raiders displayed their cutting edge in a 34-14 win against Rochford Hundred whilst Henley Hawks scored eight tries in their 48-24 triumph over Westcliff.

Meanwhile, tries from Chris Bolton and Matthew Bursey made sure Bury St Edmunds departed Barnstaple with a 17-0 win and Dings Crusaders hit Canterbury for six in a 32-10 victory.