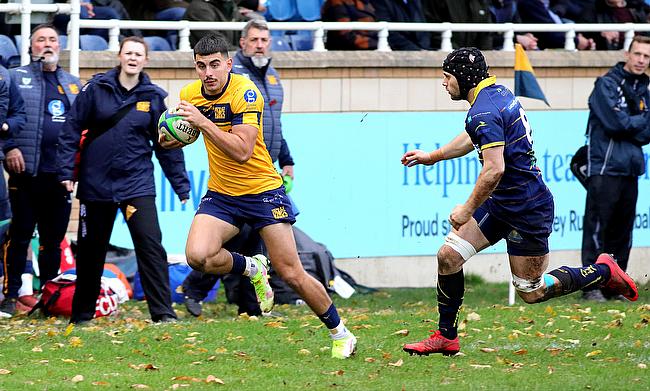 The gripping title battles in National Two delivered in Round 10 whilst the top three in National One all picked up victories. (Photo Credit: Steve Karpa)

Cinderford returned to winning ways at the first time of asking as the National One league leaders ran in nine tries to beat Bishop’s Stortford 55-39.

After suffering their first loss of the campaign in Round Nine against fellow title candidates Rosslyn Park, Paul Morris’ side displayed bucketloads of resilience to see off a stubborn Stortford outfit.

Tries from Seb Brownhill, Rory Banks and Cole Swannack – plus two penalties from the boot of Tom Walker – helped the visitors to a half-time lead.

James Forrester, Will Hendy, Will Baldwin and Joe Dancer had crossed for Cinderford, and it was first blood to the table-toppers after the break as Matt Lane’s effort gave his team the lead.

But the final segment of this sensational contest belonged to Cinderford as Dancer completed his hat-trick before Liam Hemming concluded the scoring with a penalty.

Second-placed Rosslyn Park eased to a 29-8 victory against Birmingham Moseley at the Rock as they continue to hunt down Cinderford.

Tries from Hugo Ellis, Jared Saunders and Austin Hay (2) wrapped up the bonus-point for Kieran Power’s charges whilst Craig Holland and Harry Leonard kicked nine points between them.

Joe Dancer with one of his three tries from Saturday 😍😍

That show and go 👀 second row or centre? 🤔 pic.twitter.com/fENU9ZJjYW

Moseley had opened the scoring through the boot of Harry O’Brien and did lead 8-7 when Sam McNulty dotted down in the first period, but that was as good as it got for the Midlands club.

Park remain seven points off the top with a game in hand whilst Moseley slipped to a second defeat of the month.

Down at the bottom of National One, Plymouth Albion scored three tries in the final six minutes to record a remarkable 41-36 win over a stunned Chinnor.

Albion’s third victory from their last four games means Damien Welch’s men are out of the bottom three, whilst Chinnor’s frustrating campaign continues.

When Elliot Chilvers crossed for the home side’s fifth try of the afternoon on 68 minutes, it looked like Richard Thorpe’s side had sealed the deal.

However, Ben Parsons and Alex Ducker – who completed his hat-trick – both ran in tries to flip the game on its head at Kingsey Road.

Jeremy To’a and Shek Sheriff also touched down for Plymouth whilst scores from Charlie Fleckney, James Bourton, Ben Manning and Kieran Goss weren’t enough for Chinnor despite building a healthy advantage in this contest.

Elsewhere in the division, Sale FC lifted themselves to third in the table after claiming a 32-15 bonus-point win at Darlington Mowden Park whilst it is now seven games unbeaten for Caldy, who defeated Leeds Tykes 31-28 in a pulsating contest at Paton Field.

Cambridge’s excellent form also continued as the prolific Ben Brownlie scored four in a 45-14 win over Tonbridge Juddians and it was also a comfortable afternoon for Blackheath who picked up a welcome maximum at Well Hall after beating Taunton Titans 42-19.

Michael Heaney’s penalty one minute from time was enough for Stour to seal their ninth successive victory as they leapfrogged Sedge in the table.

The Tigers had fought back from 12 points down to lead on 72 minutes following tries from Tom Ailes and Matt Gallagher but having had their collective noses in front for large portions of this compelling contest, the Midlands club ultimately had the final say.

The game was still in the balance at the interval as Rian Hamilton’s try and a penalty from Tom Davidson left Dale trailing by just two points after Ben Boothman and Will Hall had crossed for Hull.

However, the hosts took complete control of this contest in the second period as Stephen Johnson, Mike Adlard (2), Keane Naylor and Tipiloma Kivalu all went over to record an eighth win of the campaign for Gary Pearce’s men.

Fourth-placed Fylde continued their rampant scoring form as they ran in seven tries to defeat Sheffield Tigers 43-12 at Dore Moor.

Predictably, Tom Carleton led Fylde’s charge as he claimed a hat-trick in Yorkshire whilst Ben Gregory grabbed himself a brace.

Tom Grimes had opened the scoring inside the first minute for the Lancashire outfit and fellow backs Greg Smith and Henry Hadfield also got in on the act.

Robert Davidson and Connor Scott did offer some respite for Sheffield Tigers, but having racked up 113 points in their final two games in October, Fylde’s relentless mentality doesn’t look like stopping anytime soon.

Also in National Two North in Round 10, Hull Ionians hammered Blaydon 51-19 to remain in touch with the leading pack whilst Loughborough Students edged past Huddersfield 33-29 and there was also a narrow win for Luctonians who beat Bournville 17-11.

Meanwhile, Harrogate claimed just their second triumph of the campaign after defeating Tynedale 38-31 at Corbridge.

It is all change at the top of National Two South again, with Redruth now leading the way following their 31-18 success against Bury St Edmunds.

The Reds currently sit at the summit of the division by virtue of ‘Games Won’ as this fascinating title battle produced its latest twist in Round 10.

Bury’s Charlie Reed scored the only points of the first half at The Recreation Ground before the game sparked into life after the break.

Ciaran Leeson had given the visitors an 8-3 advantage after his converted score, but tries from Will Trewin, Kyle Bradley and Luke Barnes put Redruth in control.

Another effort from Leeson cut the gap to six points with four minutes left on the clock, but Sam Stevens’ try wrapped up the victory for Nigel Hambley’s side.

Tom James scored a hat-trick for the Eees, who secured the bonus point before the break after the winger had crossed twice whilst Pierre Thompson, Andy Hamilton, Tareq Haffar, Dan Rowland and Chris Davies also touched down.

With a 47-0 advantage, the away side kept their foot on the throttle as James completed his trio of tries before Davies, Charlie Gossington, Harvey Scott and Luke Peters also joined in.

TRY ESHER! Luke Peters gets in on the action now, as Jack Lavin converts and the referee blows the final whistle.

Callum Lynch’s converted try was Westcliff’s only response on another tough afternoon.

Worthing Raiders have dropped to third in the league standings after falling to a 43-26 defeat to an excellent Henley Hawks outfit.

The Sussex club did begin the day on top of the pile, but a second defeat in three matches now leaves them trailing the leading pair of Redruth and Esher by a point.

Tries from Guy Rawsthorn, Will Crow and Tom Emery helped Henley into an early 21-0 lead, but Ken Dowding and Henry Birch both scored to reduce the deficit.

Cail Cookland – who scored 18 points in total – did go over before the break for the Hawks, but two tries in six minutes from Levi Davis and John Lee saw Worthing tie the game up at 26-26.

However, the final quarter belonged to Henley as Emery and Reuben Norville both dotted down – either side of a Cookland penalty – to clinch the win for the home side.

Old Albanian are also very much in the title race conversation as Ben Charnock and Chris West both scored twice in a comfortable 45-21 victory over Barnstaple whilst sixth-placed Clifton beat Guernsey Raiders (5th) 40-17 at Station Road.

Elsewhere, Barnes defeated Rochford Hundred 23-15 and Canterbury’s meeting with Hinckley was postponed due to Covid-19 concerns.

Subscribe to The National League Rugby Review Show to watch the highlights from Round 10...