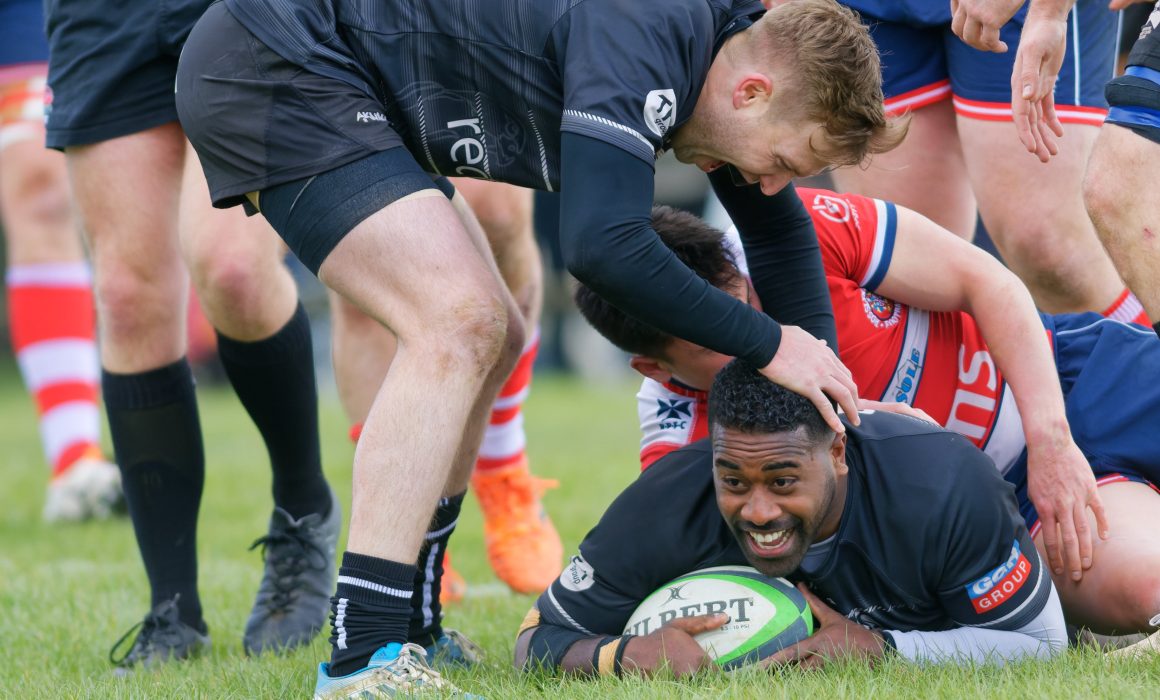 Defeats for Leeds Tykes, Blackheath and Plymouth keep them in a relegation scrap, title bids were dealt significant blows whilst there was nothing to separate two of National Two South’s promotion hopefuls. (Photo Credit: David Howlett)

Leeds Tykes were left crestfallen as Tonbridge Juddians snatched a dramatic 29-27 victory at The Slade in a pulsating National League Rugby encounter.

Visiting Leeds had fought back from 21-5 down to lead by a single point with a minute remaining, but a last-gasp penalty from Ryan Taylor-Dennehy stole the win for the already relegated TJs.

Jon Callard’s side, who themselves are trying to avoid the drop, did leave Kent with two bonus points and they are now seven points off safety with four games left to play in their campaign.

The hosts scored three first-half tries through Bobby Bratton, Kyle McGhie and Duncan Tout but Leeds brought themselves right back into the contest in six second-half minutes.

Adebowale Ademakin and Harry Jukes both dotted down to add to Adam Brown’s effort before Taylor-Dennehy converted his own score for TJs.

However, the home side were to fall behind as Will Hardwick and Dominic Hardman both touched down to make it 27-26 in favour of Leeds, but their failure to convert the latter’s try would prove costly as Taylor-Dennehy clinched the win with the last kick of the game.

Blackheath remain Leeds Tykes’ closest target after they fell to a 29-17 loss at home to Rams RFC.

Three tries in the opening half an hour from Robbie Stapley and Tom Vooght (2) effectively took the match away from ‘Club’ and with Leeds Tykes having two games in hand over James Shanahan’s side, there is still work to be done if Blackheath are to secure their place in National One for next term.

In contrast, Darlington Mowden Park are on the cusp of confirming their position in the third tier after defeating rivals Plymouth Albion 25-22 in the North East.

Garry Law’s side have now won three on the spin which leaves them 13 points clear of Leeds Tykes with three matches remaining in their season.

📺 The National League Rugby Review Show: Round 27@WMuggleton hosts from The Slade as he wraps up all the major talking points from a cracking weekend of action.

The hosts led 14-10 at the break through tries from Euan McKirdy and Max Davies, with Alex Ducker going over on two occasions for Plymouth.

A penalty from player/coach Law extended the lead before Albion’s Ramaz Rukhadze levelled things up with his try on 54 minutes.

Plymouth’s long list of recent injuries was evident given they were only able to name two replacements on the bench, but they continued to fight even after Davies had rumbled over for his second for DMP.

Rukhadze followed suit to reduce the deficit to three points with seven minutes to go, but the home side held on for a crucial victory. Defeat for Albion keeps them nine points above Leeds Tykes, who they face this coming weekend.

The drama continued at the top of National One in Round 27 as there was a further twist in the race for the title. League leaders Caldy marched on as they beat Bishop’s Stortford 31-18 to record their 15th successive win but Sale FC remain seven points behind them after their own 43-24 bonus-point victory over Birmingham Moseley at Billesey Common.

However, the main headline came from Chinnor as they dealt Rosslyn Park’s promotion hopes a severe blow following a superb 55-17 triumph in Oxfordshire.

Kieran Power’s side arrived at Kingsey Road eight points adrift of Caldy, but their sixth defeat from their last nine games means it is now a very tall order for Park to reach the Championship.

After the restart, Goss, Mark Darlington and Nick Smith crossed for Chinnor before Park – who received three yellow cards during the afternoon – ended a difficult day with a flurry as Henry Spencer and Charles Piper both went over.

Their latest defeat means Cambridge have moved themselves into third spot after they secured their sixth win on the bounce following a 38-24 success against Taunton Titans. Jake McCloud and Ben Brownlie both bagged braces for the Blood and Sand who stay nine points behind Caldy with a game in hand.

Hull continued their relentless pursuit of the National Two North title with a nine-try demolition as they beat Blaydon 57-7 to extend their winning streak to 17 matches.

Sam Crane, Keane Naylor and Mike Adlard all scored twice for Gary Pearce’s troops who are now nine points clear at the summit.

Their lead increased over the weekend as second-placed Rotherham Titans suffered a surprise setback as they lost 36-31 away at Huddersfield in a thrilling contest at Lockwood Park.

Rotherham’s Jamie Cooke and Kieran Curran scored tries either side of efforts from Callum Thompson and Nick Sharpe as the game was level at 12-12 after 25 minutes.

Scores from wingers Kian Stewart and Sam Nunn pushed Field 14 points in front at the interval, but the Titans almost completely wiped out that lead just after half-time through Harry Dunne and George Tucker.

The ‘see-saw’ nature of this contest continued when Thompson crossed for his second before Lewis Allen’s converted try made it all square with eight minutes remaining.

But the decisive moment came from the hosts on 77 minutes as Sharpe burst through the Rotherham defence to secure only Huddersfield’s seventh win of the campaign.

Rotherham’s setback means they are now level on points with third-placed Sedgley Park who ran in seven tries to beat Tynedale 45-14, with Jacob Tansey and Matt Gallagher both scoring twice for Scott Barrow’s men.

Clifton and Worthing Raiders still have work to do if they are to realistically get their hands on the National Two South title after playing out a gripping 31-31 draw at Station Road.

With table-toppers Esher picking up a maximum in their 43-22 win over Bury St Edmunds and second-placed Redruth following suit after a comprehensive 59-5 triumph against Rochford Hundred, it means their nearest challengers have slightly fallen away.

The result leaves Clifton eight points off the pace whilst Worthing are 12 points behind Esher, but they do face Peter Winterbottom’s side in two weeks’ time.

Tries from Dan Sargent (2) and Kieran Leeming gave the Raiders a 19-0 lead after just 12 minutes in this contest as the visitors capitalised on some Clifton indiscipline.

FT@cliftonrugby 31@WorthingRFC 31@Natleague_rugby @swsportsnews
The ref blows up and that's the end of a fantastically exciting game. That's 3 points each and well deserved.
What a match. Safe travels Raiders.

However, the hosts roared back with Brad Talbot and Alex Giltrow on target but Worthing held a 12-point advantage at the break after Liam Perkins had dotted down the bonus point score.

It was first blood to the home side after the interval as Dan Broady touched down and when Alex Howman scooted over with 10 minutes to go, the scores were level.

Away from the top four, Leicester Lions continued their strong end to the season by beating Barnes 28-10 whilst Henley Hawks returned to winning ways as Reuben Norville’s hat-trick helped them to a comfortable 48-17 victory over Barnstaple.

Elsewhere, it is seven wins in a row for an impressive Dings Crusaders side who held off a late Hinckley revival to leave the Midlands with a 34-29 triumph, Tom Stileman produced a scintillating individual performance as he scored a remarkable six tries to guide Old Albanian to a 36-28 victory over Guernsey Raiders and Canterbury picked up just their first away success since October following a 33-19 win at Westcliff.