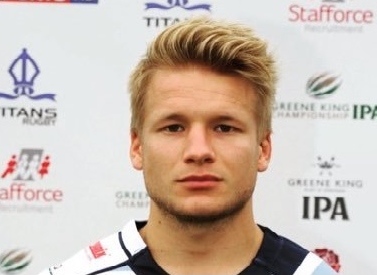 The former Newcastle Falcon scrum-half discusses his move back to Lymm, coaching and his experiences in the Premiership and Championship.

It is a sign of Lymm’s start to the season that one of their coaches is thoroughly enjoying life back in the National Leagues.

At 26, Andy Davies still has many years of being involved in the game to come, but the former Premiership scrum-half, who is now  a player/coach at Lymm, knows the side sitting second in North Premier is exactly where he wants to be at this current moment in time.

“At the minute, I am really enjoying being back playing for my local club. It is great to be playing with my mates again. I am thriving on balancing coaching with playing and it didn’t takes me long to get back into the groove at Lymm.”

Speaking over the phone, Davies reflects on his journey back to Crouchley Lane.  He was plying his trade in the Championship last season for Rotherham Titans and he was also part of the squad that reached the play-off semi-final in 2014/15, but just failed to edge past Bristol.

However, an enjoyable time in Yorkshire was marred by injuries; a common theme for Davies throughout his playing days so far.

The former Newcastle Falcon suffered 18 months on the sidelines, just before he went to university but Davies was given a lifeline by the National Leagues. “I finished school and was part of the set-up at Sale,” he says. “I was then out for a long time and went to Newcastle University. I was then injured again, but I joined Blaydon who were great with me. They helped with the rehab and Micky Ward’s influence gave me a route from the National Leagues to higher levels.”

Ward was the scrum coach at Kingston Park, working alongside Mark Laycock, at the time and they invited Davies down to the club which led to him being offered a contract. After picking up two lengthy injuries, Davies wanted to take his time in his first pre-season at the club. He admits it was a shock playing in that environment after long stretches out of the game, but the experience of two years with Newcastle – playing in LV=Cup, European and Premiership games – is something Davies is proud of.

“Any player wants to play at the top level,” Davies says. “Newcastle and Micky gave me a chance and I was pleased to be a part of the set-up there.”

Davies made five first team appearances during his spell with the Falcons, with a lot of his game time coming in the Championship. “Falcons sent me on loan to Rotherham and at the time, Lee Blackett was involved there,” Davies adds. “All summer he wanted be to be in Roth’s team, but Newcastle did want me back.

“I was supposed to play against Jersey for Rotherham, but Newcastle needed me one weekend. I thought I was going to play but I ended up not featuring and I think that was when I decided, that after experiencing my best rugby at Rotherham, I wanted to move their permanently.”

So after three years at the Titans, Davies returned to his local club Lymm and feels that the National Leagues have vastly improved which can only help the profile of the lower tiers in England.

He added: “You have to have aspirations in the National Leagues.

“If you look at National Two North this year, you have two sides that were in National One [Blaydon and Tynedale] now competing at that level and that is just one example of how competitive the divisions are.

“We [Lymm] are one the amateur clubs in North Premier and we have made a great start. We will be taking it one game as it comes, but we know that this league is so strong so we can’t get ahead of ourselves.”