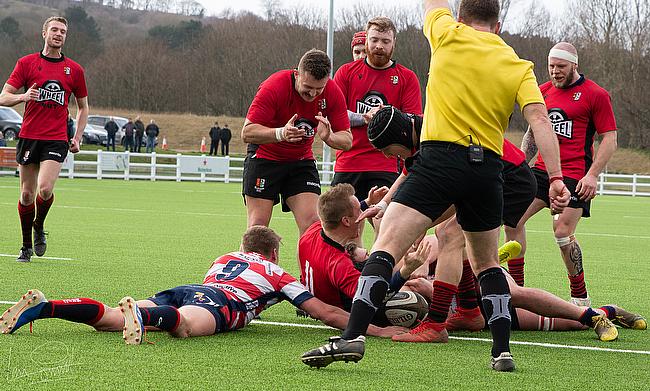 In the latest edition of our series ‘New Arrivals’, we focus on North Premier champions Blaydon, who will be making their return to the National Leagues next season following a two-year absence. Photo Credit: (Ian Smith)

This season, Blaydon achieved their aim of gaining promotion to the National Leagues, but back in April 2018, the club were seemingly on the decline.

The North-East outfit had been relegated from National One in the previous campaign and the same, unwanted fate occurred 12 months later as Blaydon dropped out of the National Leagues following a final day loss against Hinckley.

That 40-36 home defeat saw Blaydon fall into the fifth tier of English rugby so the club were keen to halt their setbacks as quickly as possible.

However, turning Blaydon’s fortunes around wasn’t an instant fix. Matt Thompson guided the side to the National Two North play-off last year, but they were beaten 31-17 by Luctonians. Less than a month later, Keith Laughlin was named as the club’s new head coach and the project of securing promotion resumed under his stewardship.

The coaching set-up was also revamped with Laughlin working alongside ex-Blaydon players Jason Smithson, Tom Penny and Lee Hogarth as the club planned for a new era. Nearly a year on, the Crows Tree club have now completed their mission and they will be playing National League rugby next season.

“It was one of the things I said to the lads when promotion was confirmed,” Laughlin tells ncarugby.com. “We should celebrate this because we haven’t had a lot to celebrate over the last few years.

“It was really pleasing. I took over in May last year and the pressure was on because the plan was to get promoted. That couldn’t have been done without the coaching staff which we brought in. It is just a good bunch of guys who know what the club are about, but have also played at a good level of rugby.

“The buy in this year was really good from the players. We brought in a saying called #OTB which stands for ‘One Team Blaydon’ and ‘Off The Ball’. It was about setting the culture on and off the field so ‘One Team Blaydon’ was setting the culture off the field and ‘Off The Ball’ is all about the work rate when you don’t have the ball. There is still a long way to go with that and I think next season, that culture will be tested because it is going to be a much harder league.”

Blaydon’s return to the National Leagues was rubber-stamped at the start of the month following the suspension of the season due to the coronavirus pandemic. At the time, Laughlin’s side sat four points clear at the summit, but only 10 points separated the top five clubs in the division.

Added to this, promotion candidates Harrogate, Billingham and Macclesfield also had games in hand over the league leaders, but based on the RFU’s ‘best record playing formula’, Blaydon were confirmed as champions.

“I suppose it was a little bit bittersweet!” says Laughlin. “I have gone over it multiple times in my head and the fairest way I thought for the outcome of the season was the way the RFU did it.

“If it was based on winning, we would not have been promoted [because Sandal and Harrogate had won one more game than Blaydon] but it was on average points per game and that rewards bonus-points. That [16 try bonus-points] reflects our style of play and I suppose we got rewarded for that at the end of the day which is pleasing.”

Laughlin also believes the sides who were battling for promotion alongside Blaydon would certainly be competitive in National Two and the North-East club will be joined by Harrogate in the fourth-tier next season.

For Blaydon, they will know what to expect from the league above having endured a chastening experience at that level in 2017/18.

The men from Crow Trees had a depleted squad following their relegation from National One so despite the best efforts of a young Blaydon side, they couldn’t keep themselves afloat as the club suffered successive demotions.

“In National Two, all of the players either retired or just decided to step down a league which is fair enough so there was a bit of the changing of the guard,” Laughlin says.

“We had a whole new squad come in which had an average age of around 20/21 so at that time in National Two, it was a steep learning curve and in hindsight, as a whole club, we were a little bit naïve about what we needed in order to survive at that level.”

Even though Blaydon can learn lessons from their most recent visit to National Two, with Laughlin at the helm, they do seem well equipped ahead of next season.

We are pleased to announce that we will be back in National 2 north next season following the outcome from the RFU. #pumpthecrow #OTB pic.twitter.com/1A9vqWspNK

The current head coach has experience across the National Leagues and he will be entering his 12th year with Blaydon whenever the 2020/21 campaign begins.

The club will also be in good company in National Two North. The likes of Fylde, Sedgley Park, Rotherham Titans and Hull Ionians is just a glimpse into the challenge which awaits Blaydon and Laughlin knows life won’t be easy in the fourth tier.

“I am still playing and I am still hanging on!” adds Laughlin. “I have planned to take a bit of a back seat. I captained the side for six years and I passed that on to Jack Davidson and this year, he has done a great job, but everything is still a learning curve.

“We are looking forward to the challenge and being completely realistic, I think it is going to be tough. Survival is going to be one of the main targets and to do that, we have to strengthen.

“We have got a bit of a longer off-season to be able to do that and there are some conversations at the minute about potentially adding to the squad. I have every faith in the guys I have got now, but I think bringing someone in with a wee bit of knowledge and experience will go a long way in terms of playing, as well as the development of the other members of the squad.”

Due to the Covid-19 outbreak, many rugby clubs have been hit financially and Blaydon have launched an appeal to raise funds for their own club during this difficult time. If you would like to donate, please follow the link here