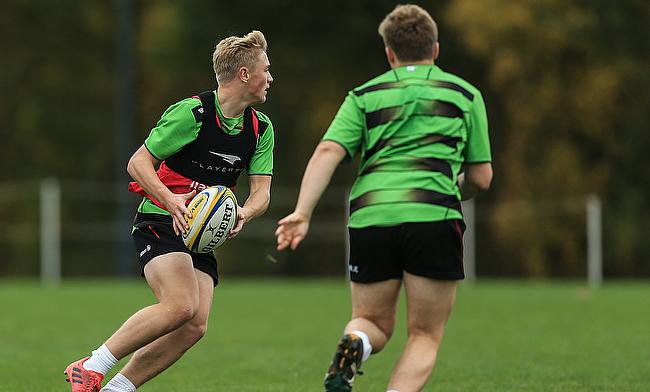 Gordon Rennie, Sports Scientist at Catapult Sports, is excited for the company to introduce its PLAYERTEK by Catapult technology to the National Leagues this season.

The partnership between the NCA and PLAYERTEK by Catapult was announced last week and it will see the two organisations work together to introduce the technology to the National Leagues during the 2018/19 campaign.

Catapult is the world’s leading developer of player tracking technologies, with its advanced GPS monitoring systems helping teams to make informed decisions based on objective information in order to enhance their game.

Very excited to announce our partnership with @nca_rugby ??

Keep an eye out for some great content over the next few weeks, and learn more about the partnership here: https://t.co/KaEXiSzs4C

Gordon, who has worked for Catapult for over two years, said: “I think it’s hugely exciting. The purpose of Catapult is to build and improve the performance of athletes and sporting teams.

“We don’t only deal with teams at the very highest levels; we want to help all athletes and teams to optimise performance.

“We have an opportunity to do this with the National Leagues, so if we can play a part in educating the clubs and providing insight and knowledge that puts them in a better position, then that’s where we get our reward.”

In rugby, the vast majority of sides across the top leagues are using athlete monitoring technology and that is now filtering down to the National Leagues.

PLAYERTEK benefits teams in a number of different ways, with Gordon highlighting three key areas where it can have a positive impact on a club.

He said: “One of the uses is injury risk reduction. There is a body of literature out there looking at different player loading patterns and the associated risk of injury.

“Using the technology, it can highlight this by showing spikes in training load or deviations away from what would be considered a normal training load for an individual so you can potentially reduce the risk of a player being injured by making a more informed decision around their loading.

“The technology can also be used to create a greater understanding of the physical demands of what athletes are required to do in the game of rugby. If you go back 10 years and look at a published study completed by Dr. Brian Cunniffe who was a sports scientist on the British & Irish Lions tour, he literally had three GPS devices on the team.

“This was groundbreaking at the time, but if you fast forward 10 years, we have pretty much got every single team in the Pro 14, the Gallagher Premiership, Top 14 and Super Rugby who use this on every single player.

“Now we have got National League teams in Scotland as well who are using the PLAYERTEK system, so we have now got a greater understanding of the demands because we have got research coming through looking at not only the demands of the game, but how that can potentially impact on performance.”

And it is not just on the field where Gordon says PLAYERTEK and Catapult can have an impact on rugby.

He added: “Another use is also for fan engagement. We have seen this coming out of Australia during the State of Origin series in Rugby League. They used a Catapult system during the match and broadcast the data.

“Data has been broadcast in football for years. You see that in the Champions League and see how far or fast a player has run, but that has never been done in rugby.

In training this week, Stuart Hogg set a new club speed record, reaching a top speed of 36.8kmh.
Let us put that into context for you… pic.twitter.com/URbYvGikDE

“Now, we are actually seeing numbers being transmitted. Glasgow Warriors put a graphic out on social media several months ago looking at Stuart Hogg’s maximum speed he achieved and they put cartoon characters and different animals next to him to see how they might compare.

“Whether they were accurate with the speed of Road Runner or a Polar Bear isn’t the point, the point was to engage with fans. You can tear holes in it from a sports science perspective or you can embrace it.”

National League clubs will begin to have this sort of data available to them over the course of the season, but how do they use all of the statistics and analysis to benefit their performance and results?

“Every team has got the data, so it is about extracting that to make it work for them,” said Gordon, who has previously worked as an S&C coach as Glasgow Warriors and Scottish Rugby Union.

“The technology removes any guesswork because you are measuring different aspects which you want to work on. If you don’t have it, how do you know if your training is preparing you for the match?

“So many teams use the technology and the feedback we get is that what it allows people to do is make more informed decisions.

“You need to start understanding the demands of the game and what we want our athletes to do. If you can do that, you can start to tailor your training to improve yourself as a team and that’s when I think you start getting the edge.”

Some of the best teams on the club and world stage are using this technology to gain that edge which Gordon alludes to.  For National League clubs, having PLAYERTEK at their disposal could really take them to the next level.

Gordon believes the technology may even add ‘professionalism’ to a club which, in turn, can encourage player to consistently look for areas in their game to work on and Gordon is now looking forward to seeing PLAYERTEK being used by National League teams this season.

“From a culture and accountability perspective around clubs, I think the element of that comes with using the technology,” Gordon said.

“I also think with players, it gives them a framework and a benchmark to know where they are at. If they can look at the demands of the professional game – and they can link to that through fan engagement with broadcasting that professional data – players from the amateur game can look at their data and compare it.

“They can see where they are at. Looking at that data may influence their thinking and they can try and improve to reach those heights of a Championship or Premiership player.

“It won’t give them all the answers, but it will provide important insights. On the flip side, they can compare a certain area and they could be matching the top players, so it might help them to work on other areas, but having that access to the data only helps with all of this.”