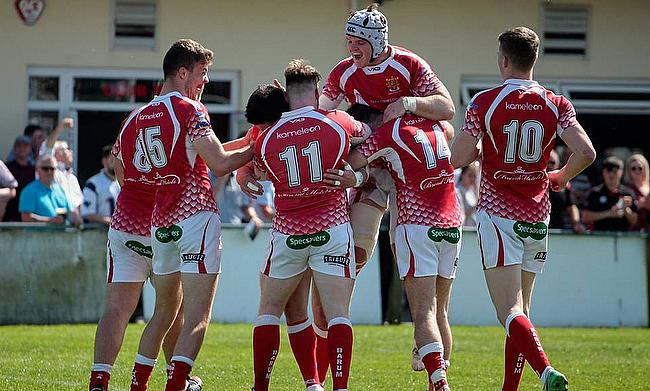 Bryn Jenkins is aware of the challenge which awaits newly-promoted Barnstaple as he admitted: “National Two is a different kettle of fish.” Photo Credit: (Bob Collins)

At the start of the month, the Chiefs were confirmed as South West Premier champions by virtue of the ‘best playing record’ formula introduced by the RFU, which determined the outcome of the season due to the impact of the coronavirus pandemic.

When the campaign was initially suspended in March, Barnstaple had an 18-point advantage over Maidenhead at the summit of the division, but the second-placed side did have two games in hand.

However, Barnstaple only required eight points from their final three South West Premier fixtures to secure a place in the National Leagues so Barum were in a strong position to clinch the title.

Promotion for the Devonshire outfit means they will be back in National Two South following a two-year absence, but Jenkins knows it won’t be an easy return.

He told ncarugby.com: “We had a couple of slip-ups towards the end of the season and I do think the teams hot on our heels, Maidenhead and Weston-super-Mare, they will be slightly disappointed because they would have wanted to make the last few games of the season count.

“We are pleased with how we have done, but National Two is a different kettle of fish as we well know. It will be massive for us.

“I think you only have to look at Bournemouth over last couple of years. The season they went up, I think they won all but one of their matches but this year, they’ve won just two games in National Two South so that shows you how tough it will be. A lot has changed since we were last in the league so we know we’ll have to adapt.”

Jenkins was part of the playing squad the last time Barnstaple were in the fourth-tier of English rugby, with the club suffering relegation on the final day of the 2017/18 season.

Since then, four of the six newly-promoted sides have managed just one term in National Two South before an instant return to level five and the step up in quality is something which Jenkins was keen to stress.

“I don’t think we can base the level on what we played in National Two a few years ago to what it might be next season because I think the games that I have seen from National Two, the standard just goes up and up every year,” Jenkins added.

“The standard we will be playing in National Two South next year, I think, would have been the old standard for National One from a few years ago.

“We are going to go in blind because of the two years we have not been there. That first game next season, it will be a shock to the system no matter who we are playing. It is basically how we can adapt and overcome the speed of the league and the physicality as well as trying to adapt a game plan which can suit us and at the same time, suit the league.”

The last time Barnstaple were in the National Leagues, the club were under the stewardship of Steve Perry but the former head coach swapped Pottington Road for Exmouth at the beginning of last season.

Jenkins, who was forwards coach at the time, took over the reins and in his first campaign in charge, Barnstaple reached the National Two South play-off.

Barum did suffer a 44-5 defeat against Westcliff almost exactly a year ago, but despite a strong term in 2018/19, Jenkins reveals there has never been any pressure on the club to reach the fourth-tier.

“Every season has their ups and downs,” added Jenkins, who has been with Barnstaple for six years. “When we came down from National Two, we changed a few things.

“Steve lives in Exmouth and it was an obvious choice for him to join them and fortunately, I was able to fill his boots which was great for me because it couldn’t have come at a better time. There is a good support network around me and the team which works really well.

“Obviously as a team, we got to the play-offs last year and lost to a very good Westcliff team which has stayed up so all credit to them.

Due to the ongoing coronavirus crisis, there is uncertainty around when the 2020/21 campaign will start, but for Barnstaple, they will continue preparing for their return to the National Leagues.

“For next season, not a lot is going to change for us really,” added Jenkins. “Now we have been promoted, we will have to cut a few experienced players and that is due to work commitments and families.

“It is a shame, in a strange way, that we have gone up because we are going to lose some players who have been around for a fair bit, but we will look to keep as many of the core squad here.

“We will have to change our style of play slightly to try and adapt and cope with the pressures that are going to come from National Two but like I said, we are fully aware of the challenge that awaits.”