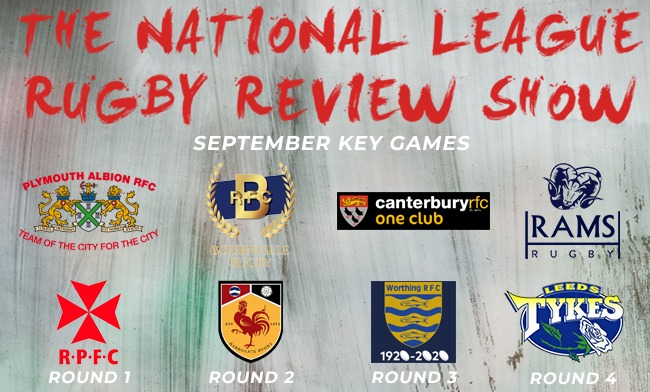 The National League Rugby Review Show will be present at four key games across our three divisions in September – opening up with a huge clash between Plymouth Albion and Rosslyn Park.

Our new highlights show, which will be available to watch on Sundays from 6pm after every round, aims to bring you the most comprehensive coverage of National One and National Two.

Host and commentator Warren Muggleton will be joined by a pundit each week at a different ground across the country as part of our key game schedule.

In case you missed it, you can watch it back over on our Facebook page: https://t.co/5mx2JQUKZi

Brickfields is our first destination as Plymouth Albion and Rosslyn Park meet in a tasty-looking clash on September 4th, before our team head to the Midlands to see newly promoted sides Bournville and Harrogate in action in National Two North.

In Round Three, our attention turns to National Two South with Canterbury taking on Worthing Raiders before we round off a blockbuster month by visiting Berkshire as Rams RFC face Leeds Tykes.

During every round, we will also be focusing on featured games from each remaining league with extended highlights + a full round up of the rest of the weekend’s action.