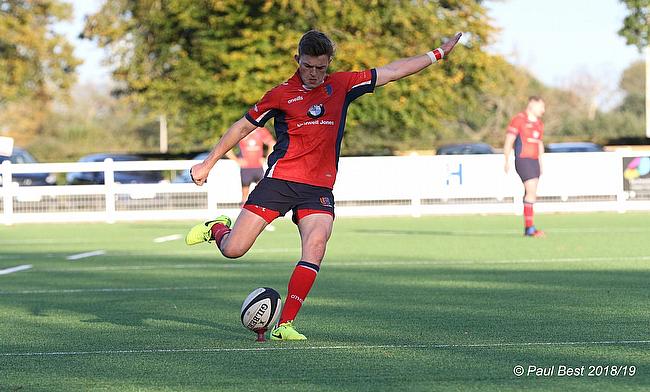 James Robins insists Chester are not putting any pressure on themselves ahead of their fixture with Tynedale.

The Cheshire outfit have the chance to move into the top two of National Two North with a win on Saturday, but the versatile back isn’t looking too far ahead.

Last weekend, Chester delivered a professional display against South Leicester to move to within three points of second placed Hinckley and a victory at Hare Lane would certainly enhance any promotion hopes Jan Van Deventer’s side may be harbouring.

However, Robins admits he and the squad are remaining grounded despite making their best start to a campaign since 2014.

Jan Van Deventer hailed another assured display from his in-form @RUFCChester side as they won convincingly at South Leicester. https://t.co/81wHEwDkeC

“We don’t talk about league position,” said Robins who joined Chester last year. “We just focus on winning and we worry about where we end up at the end of the season.

“We have not put an extra pressure on ourselves by not talking about top four or top two. It is just about us going out and focusing on our job.

“In the summer, we didn’t really go out and look for answers. I think this year, it’s just more focused and we are just going out there and expressing ourselves. We have worked hard and reaped the results on the pitch more than anything.

“I think we have had quite a tough fixture list in terms of playing teams like Hull Ionians and Hinckley at the top of the table, but we have not put any pressure on ourselves and we have got the results we have deserved.”

This weekend’s upcoming fixture for Chester is a rearranged game after one of Tynedale’s players contracted MRSA from cuts and bruises they sustained in a match played on an artificial surface earlier in the season.

The North-East club rightly postponed the original fixture with Chester in September, but they were only out of action for a week.

Chester had won their first four matches of the term in the lead up to their scheduled game with Tyne, but following the postponement, they suffered their first loss of the season away at Peterborough Lions.

Whilst Robins was frustrated with the result against the Lions, he was delighted by the response his side produced as they inflicted a defeat on rivals Hinckley a week later.

Congratulations to @RUFCChester who kept Hinckley to nil for the 1st time since January 2014 on Saturday – they scored 3 tries, here are the highlights pic.twitter.com/0ExOJVfHgt

“Hinckley were top at the time,” said Robins. “I think we were pleased with how we reacted, especially after the disappointing result away at Peterborough Lions, but to turn it around and nil Hinckley, was a really big result for us.

“We probably think we could have got the five points, but at the end of the day, to get a win against an unbeaten Hinckley side was really impressive.”

Key to Chester’s excellent start to the season has been their home form and over the last few years, their results at Hare Lane have certainly caught the eye.

Van Deventer’s men have secured 27 victories from their last 33 matches on their own patch and currently, they are on a 12-match winning run at home.

Robins added: “I don’t know why we are good at home! Last year, we had the old boggy pitch and now it is 4G so I am not sure we can put it down to that.

“Everyone feels comfortable at home and it’s just that confidence that gets us over the line. I think people just enjoy playing at Hare Lane. It is a good environment.”

On Saturday, Tynedale will be looking to become the first side to beat Chester at Hare Lane for 11 months and the North-East club arrive in Cheshire in good spirits.

Ben Woods’s side have won three of their last five matches, but despite the men from Corbridge sitting just three points clear of the relegation places, Robins is adamant Chester will avoid complacency.

“We can’t underestimate Tynedale,” he added. “We have played them in the past and we know how they will play. They will enjoy coming down here and it is going to be a big ask to get the five points, but I am sure if we play to our best, we will give ourselves the best chance of getting a result.

“They had a good result against Preston at the weekend. In this league, you have to go with high expectations because everyone is a good side. Anyone can beat anyone so we can’t take this game lightly. We have to stick to what we have been doing so we can do the job.”