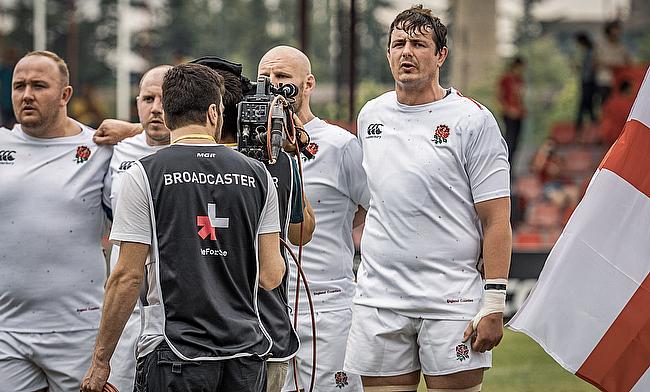 England were able to secure a 28-15 victory in their opening match on Friday evening after a bruising encounter at the Aia Arena.

Both sides had strong periods during the match, but captain Makin is keen for England to showcase a more complete display when the teams meet in Tbilisi on Tuesday.

“We were pretty sore after Friday to be honest!” said Makin.

“We expected a physical encounter and that’s what came. That is what Georgia relish and I think we matched them in that department which is good.

It was a bruising encounter, but @EnglandCounties began their tour of Georgia with a hard-fought win at the Aia Arena. #Nat1 #Nat2n #Nat2shttps://t.co/j6AIpEPLZW

“They pride themselves on being physical. You saw that in the scrums and they were quite dominant in a period in the first half.

“We identified that we had to match them physically first, but then if we could produce a tempo they couldn’t live with, we would probably get the upper hand. We did that at the start of the game and just before half-time.

“For us on Tuesday, it is about maintaining that throughout the game as well as improving on certain areas like our set-piece because if we can do that, you will see a massive difference in terms of putting together an 80-minute performance.”

Makin also highlighted two key moments in the game which allowed England to take control of proceedings against the Georgians.

Two quick-fire tries from Nick Hankin and Kieran Moffat allowed the tourists to carry a healthy lead into the second-half and an intercept score from Callum MacKenzie eventually took the game away from Georgia.

“That period of 10 minutes when we scored those two tries were key and when Callum had his intercept as well, that sort of put the game to bed,” Makin added.

“The game could have gone either way before that, but we obviously put a bit of distance between us and them thanks to Callum’s try which helped us get the win.

“In that second-half, we were under pressure quite a lot in terms of defence, but the lads stood up to that physical battle which was great for us.

“We actually had a full rest day on Saturday to give the lads a bit of recovery which has stood us in good stead because we have been firing over the last couple of days ready for Tuesday night.”

The second-row admits being part of the England Counties programme is a perfect way to end a successful season. Makin’s club side, Hull Ionians, were crowned champions of National Two North but he revealed promotion wasn’t their initial aim at the beginning of the campaign.

“It is a long old season, but it [England Counties] is the icing and the cherry on top of the cake,” Makin said.

“You put in the graft all season long and we obviously reaped the rewards at Ionians for that. You then have another few games for your county and then you get to be part of this. It is great to captain a great group of lads. It was similar to last year in Romania and it is good to see lads from all different clubs and counties come together to play in an England shirt.

“It [promotion] wasn’t the aim at the start of the season for Ionians. We sat down in June time and we had lost quite a lot of players to Rotherham Titans so we wanted to just consolidate for a year. We wanted to go back to basics in terms of picking up players who were local to us rather than fetching players from further afield and we did that quite well.

“The way it went was that we sort of got on a roll in terms of winning. We weren’t going to turn down promotion, but it wasn’t really our outset at the beginning of the year.”

James Tincknell and Lewis Minikin of Hull Ionians were also included in the England Counties squad for this tour of Georgia and the latter has been named in the starting XV for the second Test.

TEAM ANNOUCEMENT: your England Counties team for the second test to face Georgia XV in Tbilisi at the Avchala Stadium #Georgia2019 pic.twitter.com/7wf3W0MQkI

England will now have another undefeated tour in their sights and for Makin, he is looking to stretch his own unbeaten record on Tuesday evening.

“We have got a squad of 24 and all of those boys are capable,” Makin said. “There is no-one who is here just for a jolly!

“As you saw on Friday night, the boys coming off the bench had a massive impact especially the front row guys.

“We will now be going out there to do our best and win the game. I’m actually unbeaten for England Counties! I have played seven games now and this is my eighth coming up.

“The last game we actually lost was a spring international against Scotland which don’t happen anymore so in five years, we’ve lost one game so it is not a bad record!

“The boys are aware of that and everyone will be working towards that. It will, again, be the cherry on top of the cake if we could go unbeaten at the end of a long season.”