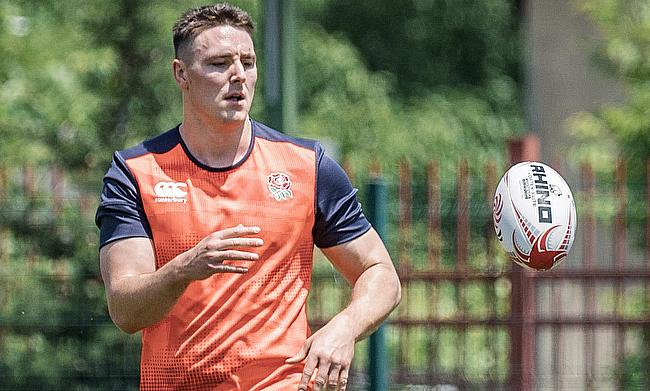 Bob Birtwell has looked ahead to England Counties’ upcoming matches with Georgia and he admitted: “They don’t choose easy fixtures for you!” (Photo Credit: John Ashton)

England Counties have not lost a tour match since 2014 and Birtwell knows Georgia will provide a stern test on June 7th and June 11th.

Last session at Martkopi before moving down to the match venue this afternoon. Players looking sharp. pic.twitter.com/X8LzenB0ie

“I spoke to a few of the boys and they said Romania were a well drilled outfit last year and we expect exactly the same from Georgia.

“We have come across to the other side of Europe to play a big Georgian side and this is a team which will be playing in the World Cup.

“It is a Georgian XV and we are not entirely sure what we will be up against, but when we face them, they will be organised so to have the bar set so high, we have got to train that extra bit harder and if we get the results, it makes it all the more sweeter.”

Birtwell, who missed out on last year’s tour to Romania due to an injury he sustained when representing Lancashire, is just one of many National Leagues players included in the Counties squad.

National One and National Two North are heavily represented while players from Redruth and Esher are flying the flag for National Two South.

“It is always an honour to play for England Counties so I am really enjoying it,” Birtwell said. “It is a great bunch of lads this year, as always, so it has been amazing and we can’t complain!

“There are a few of us from the National Leagues so that is good for the strength and depth in the divisions. These lads perform week in and week out for their clubs, but also when it comes to the counties season, these lads take it seriously because they want to represent their county and put a good shift in.

“If you do that, you have a chance of getting on these tours so it is a great opportunity and it is a great platform to show off the talent in the National Leagues.”

After arriving in Martkopi earlier this week, team spirits seem to be high in the England camp ahead of their first clash with Georgia on Friday.

Birtwell praised the preparation by the Counties’ coaches and staff as the players look to cope with the intense heat and he feels they have struck the right balance between hard work and down time.

“Everything has been well planned,” Birtwell said.

“We flew out on Monday afternoon so we did squeeze a session in at Crawley Rugby Club. We landed quite early on the Tuesday morning so that gave us time to recover and we were up and training by 12pm so it was great to shake off the cobwebs.

“It is good to also take the weight off your feet in this heat, but we do have team meetings regularly and the planning which goes into them helps us massively so we couldn’t ask for more as players.

“We also do have a few lads who are into Love Island during our down time! All the learning of lineout calls and stuff like that gets put to one side to make sure you get a good hour of Love Island in! We are ahead of the UK in terms of time so no spoilers!”

This is officially Birtwell’s second tour after being selected in 2017 – when England won both of their matches in Spain – and while the senior Counties prepare for Georgia, the U20s side have recently enjoyed their own tour in Romania.

Steve Salvin and Lou Meadows’ team won both of their Tests and it highlights, once again, how beneficial the Counties programme is for players.

Earlier this year, the RFU announced they would be reducing funding for the Counties programme, but Birtwell was keen to emphasis its value.

“It is great for the young lads who are with the U20s,” Birtwell said.

“It is a great chance to showcase their talent as well because there is a lot of good players playing for their clubs. At Sedgley, we have Matt Gallagher who has impressed out there.

“It is great for these lads to put the England kit on and get that feeling of what it is like to play at that elite level just for a week or two.

“It is great they have had a good tour and even at this level, this is the highest some of us will ever play so it is great to get the opportunity to feel part of the England community. We take a lot of pride in representing our country. We don’t take it lightly.”

Clearly, Birtwell and England will be fully focused on putting in positive performances against Georgia over the next few days as they aim to keep producing excellent results.

“We are going to go out there and try and play some positive rugby and get two wins from two,” Birtwell added.