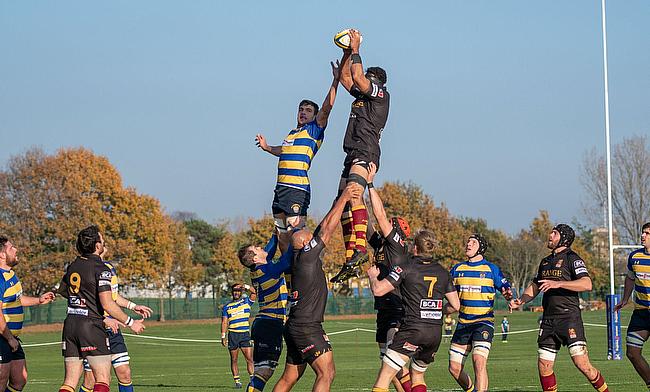 This weekend marks the final day of the National League season and before the National Two play-off takes centre stage on May 4th, there is still the small matter of deciding who goes up to the Championship and who drops down to the fourth tier. (Photo Credit: Ian Carter)

With promotion and relegation all done and dusted in both National Two North and South, all eyes will be on National One on Saturday afternoon as this compelling season reaches a thrilling climax.

Firstly, we begin with a look at the title race…

Ampthill and District know just a single point from their trip to bottom of the table Loughborough Students on Saturday will see them promoted to the Championship for the first time.

Since promotion from National Two North in 2015, the A’s have not finished outside the top four and now the Bedfordshire club find themselves on the verge of their latest piece of history.

“It has been a great season like our last four have been, really,” Ampthill head coach Paul Turner told ncarugby.com

“For us, at the beginning, we used to go to some of the more established clubs and some didn’t really know where Ampthill was. Most people do now and we have just got to finish off our job this weekend.

“We have got full respect for Loughborough. We have had some great battles with them over the four years we have been in this division and Saturday will be no different. If we play our normal way, it will be edge of the seats stuff!”

Ampthill have been in the promotion picture for a large portion of the season and they took a significant step towards the Championship after beating title rivals Old Elthamians 36-6 at the start of March.

The A’s have now racked up 12 straight wins and are heavy favourites to complete the job on Saturday afternoon against a Loughborough side who had their relegation confirmed two weeks ago.

Turner, who joined Ampthill after his time with the Dragons, added: “We had a real ding-dong down at Old Elthamians’ place before Christmas where I think it was a 13-all draw. Obviously, we were quite focused on the game at our place and got ahead early and I think we scored five tries which was really pleasing.

“They have also proved during their season that they were always going to be a top four side so you have got to take your hat off to them. They have had a great season as well.

“I can remember the days we were in National Three and the Midlands leagues not so long ago. We didn’t quite know what to expect in National Two and the same in National One, but we have adjusted quite well.

“As a club, we are quite humble where we have come from. We are really proud and so if we could finish it off on Saturday, it will be a great day for Ampthill Rugby Club.”

Old Elthamians will be waiting in the wings knowing they must secure a bonus-point victory against Rotherham Titans to stand any chance of capitalising on an unlikely Ampthill slip-up.

After concluding their debut season in National One in sixth place last term, Gavin Lach’s side have been superb once again in this campaign.

The last couple of years has seen the title race become more of a procession, but OEs have taken it to the wire in 2018/19 despite not harbouring promotion aims back in September.

Lach said: “It has been a great campaign. There has obviously been a couple of disappointing things along the way and that’s sport and that’s life, but if we had turned around on the first weekend of the season and said we would be in the fight until the last day of the season, anyone in the club would have taken that.

“Hand on heart, I wanted to finish in the top three this season. I am over the moon about where we have finished. For a club that was in the London and South-East Division 3 about 10 years ago, that’s some achievement.”

Old Elthamians have been one of the busiest clubs since the end of last season and they are keen to avoid 'second season syndrome' in National One. #Nat1 pic.twitter.com/dIzQ9m3540

It looks like an historic promotion to the Championship won’t occur this season for OEs and their hopes were dashed when they lost to Ampthill last month. Nevertheless, the men from College Meadow have continued to apply pressure on the league leaders.

Following their performance this term, OEs will be tipped for another title challenge but Lach is only focused on maintaining an impressive individual and club record next year.

He added: “We were very disappointing at Ampthill. Take nothing away from them, the better side won on the day.

“I have spoken a lot to the boys since then about staying in the fight and about taking it as far as we can and that reaction from the boys to want to stay in the fight has been amazing.

“We have won four in a row to take it to the last week. If Ampthill do slip up, we are going to be there to take our chance, but fair play, they beat us at their place and there are no qualms about that whatsoever.

“To say that we want to go up next season would put a massive target on our backs for everyone to have a shot at! I want to improve on our finish this season if that is at all possible. I have been in charge for 10 years and I have always improved on our position in the league each season so to do it next year would be the aim again!”