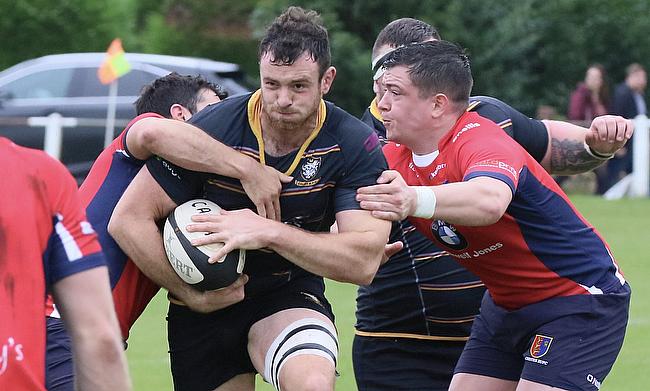 The Wirral club dropped out of National One back in April following two years at that level, but they have begun this campaign extremely well.

Gareth Davies’ side have won all five of their National Two fixtures thus far, including victories over Chester and Loughborough Students, meaning Caldy currently sit on top of National Two North.

Caldy suffered heartbreak on the final day of last term as they conceded a late try against Birmingham Moseley which condemned them to the fourth tier.

However, the men from Paton Field haven’t dwelled on their disappointment and they are using their relegation as motivation as the club aim for an immediate return to National One.

Dickinson said: “I was absolutely gutted when we got relegated. It literally came down to the last few minutes of the game and let alone that, some of the results throughout the year were so close.

“Before Christmas, we won the majority of our games by close margins and then after Christmas, the complete opposite happened. It was nip and tuck, but we do feel like we are trying to be a National One squad in National Two.

“We are just desperate to be back in National One. It is good, competitive rugby in that league and I am not saying it isn’t in National Two, but that is the level we want to be at. We want to be competing against the best we can at a semi-professional standard.

“Last year will definitely spur us on. We are not belittling National Two at all because we know we have our work cut out to get promoted, but last year is motivating us because we want to be back at that level.”

Dickinson puts Caldy’s winning start down to an encouraging pre-season, but also, because the majority of the squad has stuck together for this campaign.

There are a number of Caldy players who experienced promotion from National Two in 2017 including Dickinson and winger Nick Royle, while the likes of fly-half Lewis Barker moved into National One with Macclesfield in 2016.

“We had a very good pre-season and we have kept our real core squad together,” Dickinson added.

“Keeping the squad together has been key. There were times last year where we showed what we are capable of.

“We beat Ampthill [and District] at home who went up into the Championship, but we weren’t quite putting those performances together regularly enough, however, keeping that squad together has really helped us because we already know each other and know how we play. We are now thirsty for more work!

“I think last year was the highest a lot of us have played at. A lot of us are local lads so to be playing National One is a big deal to us and that is where we want to be.”

Dickinson has been affiliated with Caldy since he was 12 years-old, and his brother Sam (formerly of Northampton Saints), also started his rugby journey on the Wirral.

JJ is now hoping his boyhood club can continue building towards an instant return to National One and he revealed despite Caldy winning all five of their fixtures, they are not resting on their laurels.

He added: “We couldn’t have asked for better really, could we? We’re very happy with how things are going.

“We had a bit of a slow start and even though we got the first couple of wins, we weren’t quite firing on all cylinders. I don’t feel like we put together amazing performances but we got the wins which is important and now it feels like we starting to click a bit more. Some of the new systems we have brought in this year are starting to work so going forward, it is very promising.”

Caldy were certainly on song last week as they brushed aside Luctonians at Paton Field and this Saturday, they face another newly-promoted club.

The Wirral outfit travel to Hull for the first time in just under five years and the home side have made a steady start to the new season.

Gary Pearce’s men were unbeaten after three matches, but successive defeats against Hinckley and Chester have taken the shine off a positive beginning to the term.

Caldy will be favourites when they visit Chanterlands Avenue this weekend but Dickinson is wise enough to know his side cannot get ahead of themselves.

“I went up to Hull back in the National Two days four years ago,” he said. “They had some big rugby league stars playing for them and it is a ground in the middle of a housing estate!

“I am not sure what to really expect from them as they have just come up, but we will do our homework on them to create a game plan which we hope will go well. We are looking to take it game by game to try and get a win under our belt. That has to be and is our only aim”