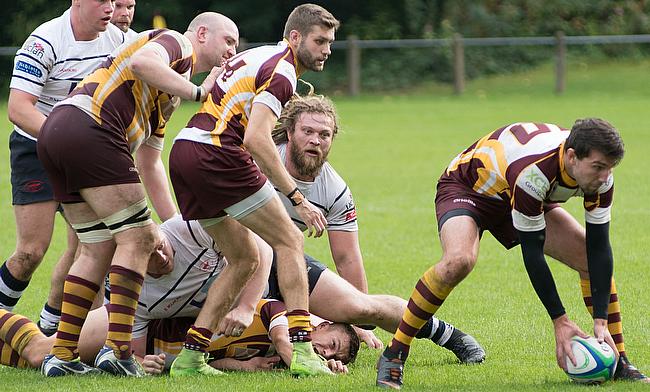 With Hull Ionians currently sitting pretty at the summit of National Two North, the attention in Round 13 will be directly below them as the race for a top two spot intensifies.

As things stand, Chester find themselves in the play-off position, but their promotion credentials will be put to the test this weekend when they take on rivals Huddersfield at Lockwood Park.

Field are only two points off Chester and that also is the case for third placed Hinckley who go to relegation threatened Macclesfield on Saturday.

Speaking of sides at the wrong end of the table, Peterborough Lions and Leicester Lions meet in a crucial clash at the bottom while South Leicester will be looking to distance themselves from trouble when they face Sedgley Park this weekend.

The Hull Ionians promotion wagon rolled on in Round 12, but they did have to overcome a rocky spell against Otley to secure their eighth straight victory. The I’s have managed to keep their cool when they have fallen behind over the last two weeks and their performances are continuing to highlight their title credentials.

The Yorkshire club are now nine points clear of second placed Chester and they can cement their position at the summit even further when they head to Lancashire in Round 13 to face Preston Grasshoppers. The hosts suffered a tough day at the office against promotion chasing Hinckley last week so they will be hoping for an improved display against the league leaders on Saturday. That is easier said than done, but Paul Arnold’s side have won their last three games at Lightfoot Green which will give them confidence heading into this difficult fixture.

Two of the possible promotion candidates collide to kick-off December as second placed Chester travel to Huddersfield, who currently occupy fourth spot in National Two North. The visitors to Lockwood Park on Saturday would have experienced a rare feeling last weekend as they were beaten at home for the first time in 11 months. Fylde clinched the victory at Hare Lane to halt Chester’s winning streak and now Jan van Deventer’s men are just two points clear of the chasing pack.

One of those sides hunting down Chester are Huddersfield and like their opposition on Saturday, they will be keen to return to winning ways. Gareth Lewis’ side suffered a surprising defeat away at South Leicester in Round 12 and just one victory in November has halted their challenge for a top two spot. However, Field are only two points behind Chester so a sixth home win of the campaign could see them move back into the promotion places this weekend.

Hinckley will certainly have one eye on proceedings in Huddersfield because they could make a return to the top two this weekend if they are able to gain a positive result away at Macclesfield. George Chuter’s side picked up their fourth consecutive home win against Preston Grasshoppers in Round 12 to really spark their promotion bid back into life, but it has been their away form which has let them down in recent weeks.

The Midlands club head to Cheshire in Round 13 having lost their last three games on the road, but they may feel confident of putting a stop to that unwanted record against a Macclesfield side who find themselves embroiled in a relegation battle. Macc suffered a major blow to their survival chances last Saturday as they were beaten by rivals Peterborough Lions and now, they sit 12 points from safety. Marshall Gadd’s side need to dig deep as we enter the festive period and a victory at Priory Park this weekend would certainly be an early Christmas present for the Blues.

Have Fylde worked their way back into the promotion picture? From the outside looking in, it certainly seems that way as three wins on the bounce for the Lancashire club has seen them climb up to fifth place in the table. Warren Spragg’s young squad had an excellent November, which was typified by their superb away win against second placed Chester last week.

The men from Woodlands are now seven points off the top two and they can continue closing the gap when they host Wharfedale in Round 13. The Greens come into this fixture on the back of successive defeats against Chester and Sheffield Tigers, but Rob Baldwin’s men are still having a solid campaign as they currently sit in eighth place. However, the Yorkshire outfit will be keen to return to winning ways when they meet their old National One rivals on Saturday.

Sedgley Park will want to put the last two months behind them. Last season’s runners-up made a solid start to the campaign and were showing all the signs of being promotion candidates once again, but October and November have been tough for Matt Bebbington’s men. Sedge enter the final weeks of 2018 having won just two of their last seven games which has really dented their ambitions of another top two finish.

The men from Park Lane are nine points off second placed Chester, but they can get their season back on track with a victory over South Leicester on Saturday. Speaking of getting back on the straight and narrow, that’s exactly what South did in Round 12. An excellent win over promotion chasing Huddersfield moved the Midlands club out of the bottom three and ended a six-match losing streak. South are now two points clear of danger and they will be looking to take advantage of a wounded Sedge side as they aim to move further away from trouble.

Otley’s four match winning run may have ended against Hull Ionians in Round 12, but Tom Casson and Charlie Maunder’s side would have taken a lot of positives from their trip to Brantingham Park. At one stage, they were 21-14 ahead against the league leaders and they will be keen to channel some of that performance into their fixture with Stourbridge this weekend.

Despite their defeat last Saturday, Otley are still having a very pleasing season while Stourbridge will be hoping their recent victory over Sedgley Park can reignite their campaign. Neil Mitchell’s side ended a run of three straights in Round 12 and now the Midlands club sit ninth in the table. The next task on Stour’s agenda will be to gain a win on the road and they will be eager for that to occur in Yorkshire this weekend. Stourbridge haven’t triumphed on their travels since the end of September so an away victory on Saturday would provide the ideal start to December.

Jamie Broadley led by example in Round 12 as his Sheffield Tigers side showed great character to come from behind and beat fellow Yorkshire outfit Wharfedale. The Tigers had a very encouraging November and they head into this month unbeaten in their last three matches. The recent form of the men from Dore Moor has moved them 10 points clear of the relegation places and another side on the ascendency is Tynedale.

The North-East club enter this fixture having won three of their last four matches and Ben Woods’ men also sit 10 points ahead of the drop zone. Considering Tyne picked up just two wins from their opening eight matches, highlights their excellent turnaround and the men from Corbridge will be keen to continue their momentum with another triumph against Sheffield Tigers this weekend.

The Lions meet in Round 12 of National Two North as Leicester host Peterborough in a crucial fixture at the wrong end of the division. The home side dropped into the bottom three last weekend following a defeat against Tynedale and it is now no win in four for Andy Key’s men.

Leicester are two points off safety, but Peterborough Lions have a bigger hill to climb as things stand. The men from Bretton Woods sit at the foot of the table and are 12 points behind 13th place South Leicester, however, the visitors will arrive at TMDP Westleigh Park with some renewed confidence. The Lions defeated relegation rivals Macclesfield last Saturday and another victory on the weekend would really enhance their survival chances.