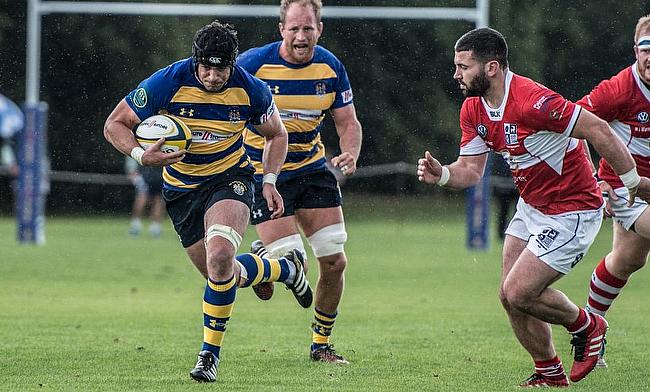 Hamish Barton believes Old Elthamians’ clash against Ampthill and District will have a huge impact on the National One title race, but he insists you ‘cannot put promotion down to one fixture.’

The top two sides meet at Dillingham Park on Saturday with OEs leading the way, but only by virtue of Games Won.

Last week, OEs’ Gavin Lach admitted this fixture with Ampthill will decide the destination of the title and while Barton concurs with his Director of Rugby, the skipper also knows the equal importance of their remaining five matches after Round 25.

“It is hard not to agree with him,” said Barton. “There is literally a cigarette paper to spilt us and Ampthill in the league.

“It is a hugely important fixture and it would essentially give whoever wins it a cushion over their nearest rival, but both teams have got a lot of tough fixtures to come.

“This weekend is important, but in a 30-game league season, you can’t put the promotion down to one fixture and one weekend.

“There are 29 other games that you play that will shape where you finish. The same number of points are available for beating Ampthill on Saturday as there has been throughout the season.”

Challenging for a place in the Championship is always a difficult task and in recent years, we have seen individual clubs take the league by storm.

Hartpury and Coventry have surged towards the second tier with minimal fuss, but this season, a number of teams have been involved in a thrilling title race.

OEs finished sixth last term, but the club have taken the next step and Barton believes his side are exceeding expectations once again.

“As a team, you’ve always got to be looking to progress,” admitted Barton.

“If you had asked us at the start of the season, with six games to go, that we would be in a position to get ourselves promoted, we would have ripped your hands off!

“It is only our second season in National One so we are pleased with what we have done in a relatively short space of time.

“We have exceeded expectations by getting where we have got to, but having got to this point now, it would be deeply disappointing to let 24 weeks of hard grind fall away.”

Since he joined OEs in 2015, Barton has been part of their remarkable recent rise and this current crop of players are in a great position to write the latest chapter.

“In my first year, I played the first few games and then bust my knee and didn’t play after that,” said the OEs captain.

“That year, we endured a pretty tough year in National Two South with a huge number of injuries and we made little or no progress.

“A year later, we put a run together to get ourselves promoted which was hugely pleasing. One nice thing about it all was when we played Sale FC this season, who we beat in the play-off two years ago, 11 of the boys who played that day were also involved against them this season.

“That is a huge part of the journey for us and it makes the whole thing more enjoyable because you are doing it alongside blokes that you genuinely enjoy spending time with on and off the rugby field and that you want to win for.

“Something that we’ve really strived for is building a positive environment amongst ourselves. If we stick together and do what we know we can do, we can go places. When you get a bit of momentum behind you, that belief gets stronger.”

The momentum and belief Barton alludes to has been on show in recent weeks for OEs. The league leaders have produced strong finishes in each of their last three fixtures to secure vital bonus-point victories against Chinnor, Esher and Plymouth Albion to stretch their winning run to seven matches.

After the visit to an Ampthill side who have also picked up seven successive wins, OEs will only have five games remaining as the conclusion of the campaign comes into view.

But Barton insists he isn’t letting the pressure of a title race affect him or his teammates.

TRY-LIGHTS ??|
A seventh successive #Nat1 win for @ElthamiansRFC last Saturday thanks to tries from:

“When you are effectively an amateur and everyone has full-time jobs outside of rugby, my mantra has always been you turn up to rugby because you enjoy doing it,” he said.

“The pressure environment is when you sit behind your desk and people are asking you to make financial decisions on their behalf or recommend what product they should be buying for their business; that’s lifetime pressure.

“There will be pressure this weekend because Ampthill are a good side and have been playing really well, but my mentality is that it is not real pressure.

“Of course, we want to get promoted more than anything, but you can hamstring yourself by focusing too much on it rather than relaxing and doing what we have been doing for the last 24 weeks which is why we have been successful.”

OEs’ destiny is in their own hands heading into the final six weeks of the season and Barton believes his side have to remain concentrated on themselves.

“Since the turn of the year, it has been about treating every game like a cup final and it is about turning up and producing a result.

“We are in a fortunate position that it is in our own hands. It is entirely up to us whether or not we go up or not. We don’t rely on the results of other teams. If we turn up and win the next six games, we will be where we dream of being.”