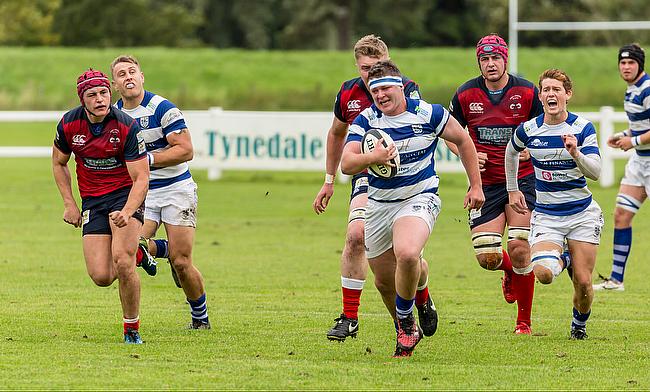 Tynedale’s Richie Elliott has emphasised the challenge promotion-chasing Huddersfield will pose this weekend when the teams meet at Corbridge in National Two North. (Photo Credit: John and Barbara Austin)

Field’s top two ambitions have suffered a setback in recent weeks as Gareth Lewis’ side have fallen to three straight defeats against Wharfedale, Hull Ionians and Stourbridge.

The Yorkshire club are now 10 points adrift of second-placed Chester and this Saturday’s game in hand against Tynedale could shape the rest of the season for Huddersfield.

And of their opponents this weekend, Elliott said: “I think they will be a bit wounded from their three losses. I’d imagine they will be right up for it on Saturday. We are expecting a big challenge from them.

“We need to spread them about, I think. We have got a lot of pace and have wingers who score tries for fun so we just need to challenge them.

“They have a formidable-sized pack and they have got a very good kicking game. Every time we have played them, they have kicked well so we need to combat that with our own strategy.”

Elliott, who has been one of Tynedale’s standout performers this term, is hoping his own side can continue their excellent recent form.

After just four wins from their first 15 games, Tyne have now won seven of their last nine matches in National Two North.

“We had a bit of a rough start, but we’ve played well recently and got a lot better throughout the year,” said Elliott. “When we get it right, we’re very good!

“We are eighth in the league and we could do better. We are looking forward to playing Huddersfield on the weekend. It is an opportunity to potentially move up a spot or two because it is a game in hand and it is our chance to show we can get better.”

Tynedale’s slow beginning to the season may have been down to the change of head coach as Ben Woods arrived at Corbridge following Scott Lawson’s tenure.

However, Woods’ ideas and standards have certainly come to fruition in the second half of the campaign and the former Leicester Tiger has also signed a new contract with Tyne.

“When he [Ben] came in, he was very different to our previous coach,” Elliot said. “It was about adapting to those different ideas and standards he set. It has taken a while to get everyone used to it, but it is coming together now.

“It [Woods staying at Tynedale] will keep everyone moving in the right direction instead of having to restart again. It will help with our progression next year.”

Under Lawson, Tyne secured fourth place last term and a top six finish is well within their reach this season.

Tynedale can actually leapfrog Sedgley Park into sixth place if they can clinch a bonus-point win over Huddersfield and at home, the North-East club have hardly put a foot wrong all campaign.

They head into this weekend on a 10-match unbeaten run at Corbridge and Elliott is hoping home advantage can have an impact on Saturday.

He added: “We do get quite a big crowd and they get behind us. It is a long way for visiting teams to travel! We’re the furthest north by a long way so we pride ourselves on that. It is our home and we don’t want anyone coming to our place and beating us.

“There is not a set target for where we want to finish. We are definitely looking to try and get in the top six. We definitely feel like that is where we should be.”