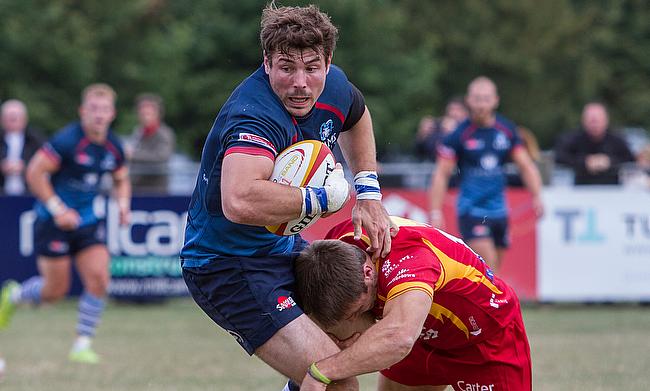 After 18 months without competitive action in National One and National Two, tiers three and four of English rugby finally return this weekend. (Photo Credit: Paul Clark)

Part of me thought twice about writing a season preview for the 2021/22 National League Rugby season.

It has been over 530 days since the last cluster of fixtures took place in tiers three and four. In the 76 weeks that have followed, there have been plenty of changes across the 47 clubs so predicting who is well placed to challenge for promotion or who could be scrapping at the bottom seems like an impossible task.

But let’s face it, to have National One and National Two returning this weekend is fantastic for everyone involved so we will try and run you through some key points ahead of Saturday’s big kick off.

Heading into the season, there will be one promotion spot available to teams in National One and it is difficult to envisage a handful of clubs not being in the mix towards the top of the table this term.

When the 2019/20 campaign was initially curtailed, Rosslyn Park were in second place behind Richmond and after a couple of seasons vying for the title, Kieran Power’s side surely have to be contenders again? With ex-British and Irish Lion Sean O’Brien also joining the club’s coaching team, Park have built a good squad and backroom staff heading into this year.

But, it was Rams RFC who actually finished as runners-up following the RFU’s best record playing formula and since they first graced National One in 2019, Seb Reynolds’ side have stuck to their principles and have only taken steps in the right direction.

Reynolds can call on a close-knit squad once again this season and the brand new stand which has been erected at Old Bath Road will be full of the Rams faithful, willing their team on to another successful campaign.

But what about the side coming down from the Championship? Well, you may assume Leeds Tykes will be itching to make an instant return to the second tier, but Director of Rugby Phil Davies told the National League Rugby Podcast that his side are focused on their gradual progress as the club continue to rebuild and reset.

With a good blend of youth and experience, the men from Yorkshire are a bit of an unknown quantity but one which possesses the talent to be fighting towards the upper echelons of National One.

Chinnor, Blackheath and Plymouth Albion, under the guidance of Damian Welch, could well be in the title chasing party too.

Birmingham Moseley have certainly put some hard work in behind the scenes over the last 18 months and after concluding the 2019/20 season just four points above the drop, Adam Balding’s side have made some shrewd acquisitions to bolster their team, including former Bath flyer Levi Davis.

Speaking on the National League Rugby Preview Show, Balding believes the group of players he has assembled ‘can take Moseley forward.’ Will the Midlands club be singing off the same hymn sheet in National One?

After waiting since March 2020 to begin their campaigns in National One, the sense of excitement surrounding Caldy, Taunton Titans and Tonbridge Juddians will be palpable as they prepare to kick off their respective seasons.

For Caldy, who won all 25 of their matches on their way to being crowned champions in 2019/20, they don’t actually start their campaign until Round Two when they face Cinderford after Old Elthamians had to sadly withdraw from National One, leaving the third tier as a 15 team league this year.

As for Taunton, they finally barged down the National Two South promotion door and they start their season on the road against Leeds Tykes whilst history will be made at The Slade on Saturday when Tonbridge Juddians host Bishop’s Stortford.

TJ’s will be making their debut in National One after three mightily impressive seasons in the fourth tier and the trio of newly-promoted sides have plenty of flair and determination to sustain themselves at this level.

After missing out on clinching a play-off spot in 2019/20, Fylde are an intriguing proposition heading into the new season. After excelling under the guidance of Warren Spragg, it is now the turn of joint-head coaches Alex Loney and Chris Briers to take over the reins at Woodlands and potentially guide the Lancashire club back towards National One.

Sedgley Park’s blip in form after Christmas in 19/20 might have cost them a chance of swooping in and snatching second place, but in the end, it was taken out of their hands by the pandemic. A healthy spine to the team and a proven track record of challenging towards the right end of the table means you have to throw them into the title equation.

Loughborough Students and Chester haven’t been far off in recent years, but watch out for the returning Hull Ionians. With Stephen Townend being joined by former Rugby League star Graham Steadman in the coaching department, they could lead the Yorkshire club to yet another promotion from National Two North.

With just one promotion slot available, the title race will obviously be hotly contested and Rotherham Titans will add their own fuel to the fire. The men from Clifton Lane were a staple Championship club not long ago but now find themselves in the fourth tier.

This is something returning Titan Matt Challinor reflected on with National League Rugby’s Joe Harvey and with that in mind, the second-row felt if Steve Salvin’s side can play to their potential, they will “be there or thereabouts” as they begin to re-establish themselves.

For Harrogate and Blaydon, they are back in National Two North. The former are at this level again for the first time since 2017 and having focused on a ‘one club ethos’ and promoting their youth prospects over the last four years, the Yorkshire outfit are excited for their opener against Sedgley Park on Saturday.

"I think if it wasn’t for our unity, I think the club would be in a much more difficult situation."

Harrogate are now looking towards a brighter future as they prepare for their third friendly in as many weeks. #BackToGrassroots

In terms of Blaydon, it has only been a two-season absence from National Two North for them, but they were a third tier club just over three years ago.  Having clinched promotion under the guidance of Keith Laughlin, they are now back in the National Leagues and with their ‘One Team Blaydon’ culture, they will be hoping to make their mark on this division.

The aforementioned duo are joined by Bournville, who will be making their National Two North debut when they travel to Huddersfield on Saturday. Mitch McGahan’s side were actually the first club to be promoted from the fifth tier having stormed their way to the Midlands Premier title and if they play with that same confidence this season, Avery Fields will certainly be an entertaining place to visit.

Eighteen months ago, Redruth and Henley Hawks were very much in contention for promotion from National Two South before the Covid-19 pandemic struck. Despite that disappointment, the two clubs have been towards the top of this division in recent times and that should provide a spark to give both teams an extra bounce heading into 2021/22.

However, Redruth Head Coach Nigel Hambly is wary of living off past seasons despite the Reds surpassing 85 points in four of their last five campaigns and stringing together a run of 14 straight wins in 2019/20. Speaking on the National League Rugby Preview Show, he felt clubs wouldn’t be able to gauge the quality of other sides until ‘six or seven’ weeks into the season due to the gap we have had without rugby at this level.

Canterbury, promoted as play-off winners in 2019, could well be one of the leading candidates following the six to seven-week period Hambly is referring to. After appointing Matt Corker as their new head coach last year, it will be very interesting to see how the club performs this campaign.

In addition, Clifton were having one of their best seasons in recent memory before the pandemic hit so the Lavender and Blacks will be eager to go again.

Leicester Lions performed admirably during their maiden voyage in National Two South in 2019/20, earning a seventh-place finish, and Hinckley find themselves in a similar boat this time around.

When they take to the field against Barnes at Leicester Road on Saturday, it will be the first time in 10 years that the Hornets have played in this specific division and both Scott Hamilton and Chris Campbell have told National League Rugby they are relishing the challenge, especially after finishing the National Two North season in third place last time out.

“National League Rugby is the perfect place to play a good standard and it is certainly a good pathway."🙌

Ahead of the new season, @Hinckley_Rugby boss Scott Hamilton talks #Nat2s and the strength of our divisions!

Bury St Edmunds, under the stewardship of Jacob Ford, and Worthing Raiders – with Jordan Turner-Hall as the club’s new head coach – could be two very intriguing sides to keep an eye on this term.

Barnstaple suffered relegation from National Two South on the final day of the 2017/18 campaign, but Barum are back at this level and ready for the exciting challenge. The Chiefs kick their season off away to Clifton, but they will return to a raucous Pottington Road for their first competitive home fixture for 560 days when they face Westcliff in Round Two.

Of course we have had a long break, but in the context of promotion and relegation, Guernsey Raiders made an instant return to National Two South in 19/20. Director of Rugby Jordan Reynolds spoke on The National League Rugby Preview Show about learning lessons from their last campaign at this level and their brief visit back to the fifth tier.

Injuries really hampered their progress in 2018/19 but they, like Rochford Hundred, will be hungry to get their teeth stuck into some competitive action once again. As for Rochford, it is their first time in National Two South and with a strong local connection between the group of players which Danny Cleare has assembled, that could be a key factor in the Essex club having a successful season.

In truth, we really could have mentioned every team across the three divisions because this weekend is the moment we have all been waiting for. It is nearly time…

Make sure you subscribe to the National League Rugby Review Show to catch up on all the action.